resident Trump announces Gorsuch as his nominee to the Supreme Court on Jan. 31
Chip Somodevilla—Getty Images
By Tessa Berenson

Donald Trump knew how to milk the moment. As he prepared to name his Supreme Court pick on Jan. 31, the President scheduled a prime-time announcement and invited Washington luminaries to the East Room of the White House. When he finally introduced Judge Neil Gorsuch as his choice, Trump took a moment to bask in the dramatic reveal. “So was that a surprise?” he asked the audience. “Was it?”

In some ways it was. Given the chance to shape the court for a generation, Trump handled the decision with uncharacteristic discipline. He stuck to a pool of prospects that he submitted last year to mollify conservatives. The White House sprang few leaks during the selection process, then telegraphed finalists with sterling credentials. In the end, a President who campaigned as a populist outsider picked an Ivy League–educated judge from the conservative establishment.

Gorsuch, 49, has served on the federal appeals court in Denver for a decade. Appointed to the bench by George W. Bush in 2006, he sailed through the Senate on a simple voice vote. In talking points distributed to Republican Senators and surrogates, the White House called him a “mainstream” choice.

This puts Senate Democrats in a difficult spot. In the past, a judge with Gorsuch’s résumé would have met little resistance. But the intense liberal opposition to Trump has ratcheted up the pressure on Democrats to block the nomination. Within an hour of the announcement, activists protested the pick on the steps of the Supreme Court. Demonstrators also massed that night outside the Brooklyn home of Senate minority leader Chuck Schumer. Meanwhile, Democrats in Congress are still steaming over the GOP’s refusal to hold hearings for President Obama’s Supreme Court pick in 2016. “The ghost of Merrick Garland,” said Democratic Senator Chris Murphy of Connecticut, “still floats around this place.”

But not everyone wants to stonewall a qualified nominee who won’t change the balance of the court. Ten Democratic Senators are up for re-election in 2018 in states that Trump won. Some of them, like Claire McCaskill of Missouri and Jon Tester of Montana, have said Gorsuch should receive a vote. “We have to approach this thing in a rational, sensible, constitutional fashion,” says Dick Durbin of Illinois, the No. 2 Democrat in the Senate.

Trump was determined to defang critics. While he was careful to choose a judge who would satisfy conservative supporters, he was also keen to find someone difficult for the left to oppose. Trump interviewed the four finalists in person in January, says Leonard Leo, a conservative legal scholar who advised the President on the selection. “He just came in one morning,” Leo recalls, “and said to somebody, ‘Hey, I think I’ve made my decision.'”

Legal experts say Gorsuch is a natural replacement for the Justice who preceded him. Like the late Antonin Scalia, Gorsuch is a textualist, who interprets statutes as written, with minimal regard for legislative history. And he is an originalist, a judge who tries to interpret the Constitution according to the views of its framers. He’s also renowned for writing clear and lively opinions. Although he was raised in Denver, Gorsuch has roots in Washington: his mother served in Ronald Reagan’s Cabinet, and he clerked on the Supreme Court for Justice Anthony Kennedy more than 20 years ago. If confirmed, Gorsuch would be the first Justice to join a former boss on the bench.

His signature opinions have dealt with religious liberty. In Hobby Lobby Stores v. Sebelius and Little Sisters of the Poor Home for the Aged v. Burwell, Gorsuch sided with claimants seeking religious exemptions for providing contraception to employees, as required by the Affordable Care Act. He wrote a 2006 book arguing against euthanasia and assisted suicide, using language that suggested antiabortion views. He also has opinions on deference to the Executive Branch that break with Scalia. Gorsuch is skeptical about the Chevron doctrine, an obscure but important principle that requires courts to defer to federal agencies in some circumstances. Progressives fear Gorsuch’s position “would result in preventing the federal government from enforcing countless acts of Congress,” says Nan Aron, president of the liberal advocacy group Alliance for Justice. “You cannot get any more extreme than that.”

Liberal groups that despise Trump and remain furious about how the GOP treated Garland have been gearing up to oppose Gorsuch. Democracy for America called for “total opposition” to the nominee. The Progressive Change Campaign Committee raised $50,000 for Oregon Senator Jeff Merkley, the first Senator to promise to filibuster whomever Trump chose. MoveOn.org plans to encourage its 8 million members to call wavering Senators. “Democrats who don’t stand up to Trump,” says Ben Wikler, the group’s Washington director, “are going to be hit with a hurricane force of outrage.”

While some congressional Democrats have signaled they will oppose Gorsuch, they’ve so far been coy about plans to filibuster. Schumer declared that the Senate “must insist upon 60 votes for any Supreme Court nominee.” But Senate majority leader Mitch McConnell has vowed that the nominee will be confirmed, implying that, if necessary, he would invoke the nuclear option–a parliamentary maneuver allowing Republicans to push Gorsuch through with a simple majority. Overriding a filibuster for Gorsuch could undermine the Senate’s ability to stand up to Trump on other matters. But the GOP should have the votes. “The feeling was, yes, there will be a fight,” says Leo, “but yes, the nominee will be confirmed.” 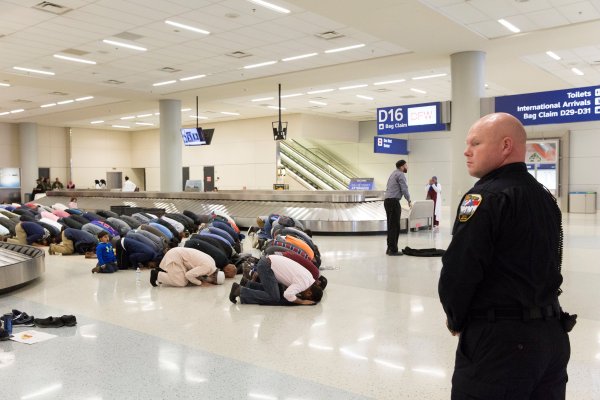 Trump's Immigration Order Is Legal-for Now
Next Up: Editor's Pick