A Billionaire Resistance Targets President Trump from the Right

President Trump speaks during a meeting with a group to discuss the nomination of Neil Gorsuch to the Supreme Court in the Roosevelt Room of the White House in Washington, on Feb. 01, 2017.
Jabin Botsford—The Washington Post/Getty Images
By Philip Elliott / Indian Wells, Calif.

As protesters converged on the nation’s airports in late January, a very different sort of resistance was shaping up at a manicured golf resort in Palm Springs, Calif. The billionaire industrialist Charles Koch, perhaps the most influential free-market activist in the nation, stood before 550 like-minded donors to declare his intention to fight key policies of President Donald Trump. “We cannot be partisan,” he said as his guests sipped wine and the sun set over the mountains. “We can’t say, ‘O.K., this is our party, right or wrong.'”

The wealthy conservative’s call to action may soon prove more disruptive to Trump’s ambitions than any of the liberal protests filling the streets. That’s because the Koch network has for years been among the biggest and most successful spenders in Republican politics. With a budget of up to $400 million for the next two years, these deep-pocketed patrons now plan to fight Trump where they think he is wrong. And their list of objections is long, including Trump’s plans for new border taxes to incentivize American production, his recent ban on refugees and immigrants from some Muslim-majority countries, and rumored proposals to fund a massive new infrastructure program to rebuild bridges, tunnels and airports with red ink.

This influence will be most felt among members of Congress, whom Trump will need to pass his agenda. The same activist organizations, campaign bankrolls and election-data systems that Koch used to help them get elected could be turned off or directed against them to fund primary challenges in the 2018 election. “Our secret sauce, so to speak,” said Mark Holden, a longtime Koch lieutenant, “is the accountability play.” Put another way: Stand with Trump at your own peril, Republicans. No one, not even House Speaker Paul Ryan, a Koch favorite, is exempt.

The resistance could also tap into the party’s grassroots volunteers under Americans for Prosperity, a Koch-backed group with millions of activists and staff in 36 states. The group played a key role in helping organize the Tea Party in 2010 and could turn against its own now. “Do you really want to go home and explain a $1.2 trillion tax on consumers to folks who live in your district?” Americans for Prosperity president Tim Phillips said, previewing his message for reporters invited to the three-day summit.

The Koch network will also be playing an inside game at the White House. Trump’s first campaign manager, Corey Lewandowski, previously ran the New Hampshire chapter of Americans for Prosperity and remains an outside adviser to the President, and another Koch insider, Marc Short, has become Trump’s legislative director. Charles Koch’s writer, Stephen Ford, is now Vice President Mike Pence’s speechwriter, and Koch-linked wonks helped Trump staff up his agencies.

But among the donors at the retreat, personnel mattered far less than the dogma. “No one wins in a trade war. Period,” said Chart Westcott, a Dallas biotech investor who rolls his eyes at Trump’s border-tariff plans. “We’re selling airplanes and software. We’re buying fruit and shoes.”

Koch allies also expressed dismay at Trump’s pattern of calling out corporate leaders by name in tweets. “Trump speaks in the mercantilist language,” Denver-based energy CEO Chris Wright said, invoking an economic theory rooted in rich-at-home idealism. “That border tax would be a catalyst to a Great Depression.” In the eyes of the Koch army, its members are the last line of resistance against Hooverville 2.0. 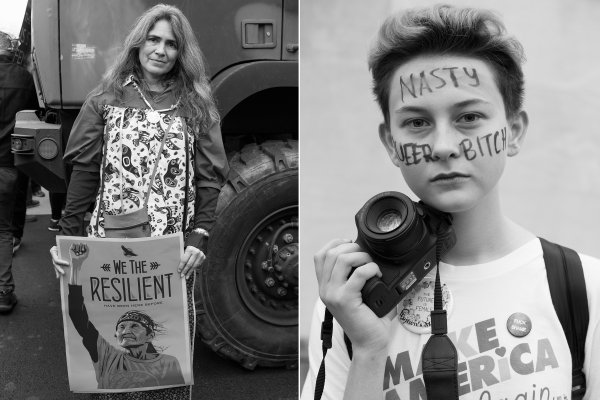 The Resistance Rises
Next Up: Editor's Pick