In more than 20 years on the pro tennis tour, Andre Agassi won eight Grand Slam titles, more than $30 million in prize money and a spot as the top-ranked player in the world. Yet as he watched the men’s final of the Australian Open on Jan. 29 from his home in Las Vegas, the former superstar couldn’t help but feel somehow flawed. There was 35-year-old Roger Federer, ancient in tennis years and just back from a six-month layoff following a knee injury, battling back from a fifth-set deficit against his longtime rival Rafael Nadal, five years younger and the winner of six of their eight previous Grand Slam final duels.

That Federer could dig so deep without losing the spirit of grace and generosity he has carried for much of his career–amazingly, it didn’t sound insincere when he told the crowd in Melbourne that he would’ve been happy if Nadal had won–was enough to make Agassi introspective. He fired off a text to a friend, fellow American ex-pro James Blake. Watching Federer, Agassi wrote, “makes me feel like I was much more of a broken person than I even realized.”

Federer’s balletic performances on the court and equanimity off it have a way of inspiring admiration. No other man has as many Grand Slams as Federer’s 18, and the incredibly deep talent pool of the current men’s tour has much to do with a generation of players chasing his excellence. Even without this unlikely win he was widely regarded as the greatest men’s tennis player of all time–with fellow 2017 Australian Open champion Serena Williams making the same case on the women’s side of the draw.

Still, this title is particularly sweet. Federer had not won a Grand Slam title in nearly five years, since Wimbledon in 2012, and even his diehard fans were starting to wonder if he would ever win another. A freak knee injury sustained while running a bath for his twin daughters helped end his 2016 season early. Federer spent months rehabbing and entered Melbourne ranked 17th, a borderline afterthought–even to himself. “Honestly, I never thought I’d be able win this tournament,” Federer told TIME in a phone interview from his home in his native Switzerland a few days after the final.

But luck, as they say, falls on those in position to receive it. When the world’s top two players, Andy Murray and Novak Djokovic, were upset early, Federer seized the opening, winning three five-set matches over top-10 players with a combination of grit and guile. And none meant more than the final. With a win, Nadal would have trimmed Federer’s major championship edge to 17-15, with Nadal’s favorite tournament, the French Open, around the corner.

“I still can’t believe I was able to make it all happen,” Federer says. “This one has a very special, different taste than all the other Grand Slams I ever won. Coming back, getting older, and people have written me off maybe, makes this one so unique.”

Federer wasn’t alone in seeing this win as part of something larger. “It’s tough to even comprehend this level of achievement,” says Justin Gimelstob, a Tennis Channel analyst and former tour player. “He’s a once-in-a-lifetime type athlete, in any sport. When it’s all said and done, we’re going to be celebrating Roger like we celebrate Michael Jordan.”

But unlike Jordan or other supremely driven stars like Kobe Bryant and Tiger Woods, Federer never sacrificed decorum on the altar of success. Jordan and Bryant, for example, were notoriously rough on less talented teammates: Jordan once slugged Steve Kerr in the face at a practice. During his heyday, Woods brought an Arctic chill to major tournaments.

Federer’s fellow players, however, have selected him winner of the tour’s sportsmanship award 12 times since 2004. “I’ve been in a lot of rooms and been around a lot of people,” says Agassi. “There’s a lot to be said for those rare people who you meet that, when you speak to them, nobody else in the room exists. There’s a generosity of spirit with Roger that anyone would want to emulate.”

Most athletes turn inward before a big contest, with a Do not disturb sign etched on their face. Federer might as well be at the pub. “If you wanted to talk to him about anything 10 minutes before his match, you can have a normal conversation,” says Blake. “It feels like you’re in a coffee shop hanging out. Not like he’s about to go out and beat one of the best players in the world.”

That attempt to preserve normalcy extends to his family life. Federer’s wife Mirka and their two sets of twins, ages 7 and 2, accompany him to most major tournaments. When most players are resting at their hotel, the Federer clan is doing things like touring the Guggenheim Museum in New York City during the U.S. Open.

The tennis world has become accustomed to Federer’s gracious postmatch remarks praising his opponents, no matter the outcome, but friends and players say the impulse runs deeper than collegiality and a knack for good PR. To prove his point, Blake says Federer was the only player to send him a note after he broke his neck during a 2004 practice in Rome. “He had no reason or need to write that note,” says Blake. “He wasn’t gaining anything from me aside from my friendship.”

All of this has helped make Federer the most important player in tennis. The game depends on the success of Federer–winner of the tour’s fan vote for favorite player 14 years running–to draw eyeballs and dollars. In Europe, the final from Melbourne drew a record Australian Open TV audience (16 million) to Eurosport. Australian TV saw its highest viewership numbers in a decade. On ESPN, the Federer-Nadal final–which started at 3:30 a.m. E.T.–drew more than twice as many viewers (an average 1.13 million) as the Djokovic-Murray final a year ago and was the network’s most viewed Australian Open men’s match in 13 years.

Federer has also been instrumental in setting a high bar on the court. As he and Nadal continue their run through the record books, hungry young players like Grigor Dimitrov of Bulgaria and Milos Raonic of Canada are knocking ever louder. “His play has made everyone else realize they have to raise the level of their game,” says Australian Hall of Famer Ken Rosewall, the oldest player to win a major in the Open era (he took the 1972 Australian Open title at 37). “Men’s tennis is as good now as it’s ever been.”

For most tennis players, a long injury rehab can help your body recover but drain your brain. “Every time I was away from the game, it was a real mental battle more than it was a physical battle,” says Agassi. “You have to watch guys win tournaments, knowing that every week, you’re sort of going the wrong direction.”

Yet Federer says the long break recharged him. “In life, I like to choose,” he says. “I want to be healthy as a person No. 1 for me and my family, and No. 2 to play tennis again. After playing for almost 20 years, all of a sudden you realize, ‘I think the body, and maybe the mind, deserves a break.'” So Federer took advantage of the moment. He took hikes with his kids in the Alps. He went to fashion shows in Paris. He made leisurely lunch dates with friends and family. “That gave me a lot of power for this year,” Federer says. “I said I have to come out of this six months rejuvenated. Fresh. Hungry. Ready to go. We were able to achieve that.”

Federer’s physical skills have tended to obscure just how he resilient he has been throughout his career–a point not lost on him. “My mental toughness has always been overshadowed by my virtuosity, my shotmaking, my technique, my grace,” says Federer. “That’s why when I lose, it seems like, ‘Oh, he didn’t play so well.’ And when I win, it looks so easy.” He says it has been that way since he was young. “Just because I don’t sweat like crazy and I don’t grunt, I don’t have this face on when I hit the shot like I’m in pain, doesn’t mean I’m not trying hard,” he says. “It’s just how I play. Sorry.”

He needed that even keel in the final against Nadal. Down 1-3 in the fifth set, Federer knew he was on the cusp of letting the match slip away. “I told myself, You have one more set to play, pal,” he says. “It’s so easy to get down on yourself, and say, ‘Look, it was a great run, it is a great comeback, be happy with the final. It’s fine. It’s all good.’ I didn’t allow that to creep into my mind.” Instead, he told himself to play offensive, to play free, to embrace that both men were in pain. “Hopefully, that’s enough,” Federer says. “And it was.”

Will it be enough if this is the last Slam for the man who has won more than anyone else? “I tried to party like this was my last one,” says Federer, who danced through the night after winning in Melbourne. He returned to his room at 6:30 a.m., trophy in hand, as his kids were getting up. He knows Wimbledon and the U.S. Open are his best shots this season. But he insists he has no milestone in mind before he would consider hanging up his racket. “I waited 4½ years, so let’s enjoy this one,” Federer says over the phone as he looks out onto the Alps. “But plans are important. They make a lot of dreams come true. And that’s what happened to me in January.” 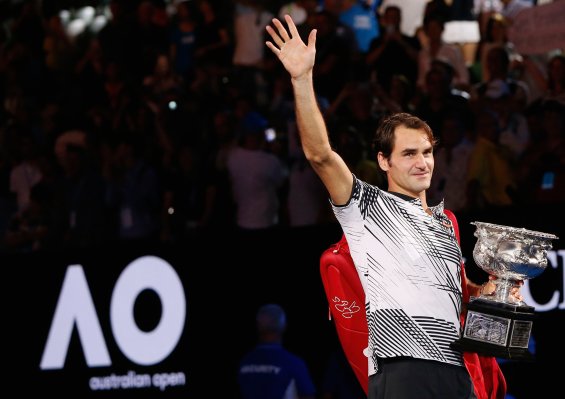 Why Federer-Nadal Was Just What We Needed
Next Up: Editor's Pick