Our Historical Ambivalence About Immigrants Is a Great American Paradox

Passions were high, and the president of the United States was eager to act. In 1798, John Adams, amid talk of war with France, signed the Alien and Sedition Acts to, in his view, protect the national interest against internal dissent and outside agitation. Passed by a Federalist-controlled Congress, the laws, among other things, increased the number of years applicants for citizenship had to wait and authorized the President to deport any foreigner he deemed dangerous to the country. “The Alien bill proposed in the Senate is a monster that must forever disgrace its parents,” James Madison wrote to Thomas Jefferson that same year. Madison was right: in the long run, Adams’ historical legacy has been tarnished by this decidedly unrepublican grab for power. And in the short term, the acts had the unintended consequence of giving new force to Adams’ opposition, led by Jefferson and Madison, who went on to defeat the Federalists in the 1800 election.

Anxiety about refugees and immigrants and the related desire of Presidents to quell that unease are nearly as old as the Republic. Americans have often limited immigration in moments of fear, only to have their fears dissipate amid cooling emotions and a reinvigorated opposition. It happened, as we’ve seen, in 1798. It happened in the mid–19th century, when the Know-Nothings sprang up in reaction to a wave of European immigration in the wake of the revolutions of 1848. It happened with the Chinese Exclusion Act under Chester Arthur, and with anarchists under Teddy Roosevelt, and with punitive immigration quotas after the Bolshevik Revolution on through the 1920s and ’30s (a period of “America first”), and with refugees from the communist bloc in the early 1950s.

One sad thing about President Trump’s attempted immigration ban–to choose an adjective with which the President is comfortable–is that Presidents before him have also used a sledgehammer blow when a pinprick would do. It’s totally reasonable to worry about infiltration, but fighting infiltration is a subtle business. And Trump has been anything but. He has also now put himself on an unhappy historical trajectory to join other Presidents–many of them otherwise good and even great men–who must forever face posterity’s judgment for clenching their fists when they might have opened their arms.

That Trump is not alone in attempting to shut America’s gates to particular groups was largely lost in the backlash against his Executive Order suspending admission of all refugees as well as immigrants and visitors from seven majority-Muslim nations. From John Winthrop to Emma Lazarus to Ronald Reagan, who spoke of welcoming “all the pilgrims from all the lost places” in his farewell address nearly 30 years ago, Americans prefer to think of themselves in a warm and generous light when it comes to the nation’s open door.

The truth is both more complicated and less attractive. George Washington articulated what we like to think of as the American creed, writing in 1783, “The bosom of America is open to receive not only the opulent and respectable stranger, but the oppressed and persecuted of all nations and religions.” Yet fears about indiscriminate immigration are coeval with the nation’s founding and the early Republic. In 1802, even the now sainted Alexander Hamilton–himself an immigrant and, in the 21st century, an emblem of American mobility–had reservations: “The influx of foreigners must, therefore, tend to produce a heterogeneous compound; to change and corrupt the national spirit; to complicate and confound public opinion; to introduce foreign propensities.” We’ve never been as open as we’d like to think, but at our best we have managed to remain truer to the spirit Washington expressed than to the one Hamilton did.

It’s an American paradox, one that continues unabated. An example from the Cold War–another moment of rising international tensions and domestic fears–is worth commending to Trump’s attention. In 1952, President Harry Truman vetoed a bill–Congress overrode him and passed it anyway–that perpetuated the quota system from the isolationist 1920s. “Today, we are ‘protecting’ ourselves, as we were in 1924, against being flooded by immigrants,” Truman wrote to Congress. “This is fantastic. The countries of Eastern Europe have fallen under the communist yoke–they are silenced, fenced off by barbed wire and minefields–no one passes their borders but at the risk of his life. We do not need to be protected against immigrants from these countries–on the contrary we want to stretch out a helping hand … to succor those who are brave enough to escape from barbarism.” Truman was calling on our better selves. We didn’t listen then, but one of the great things about America is that redemption is always possible. At least thus far. 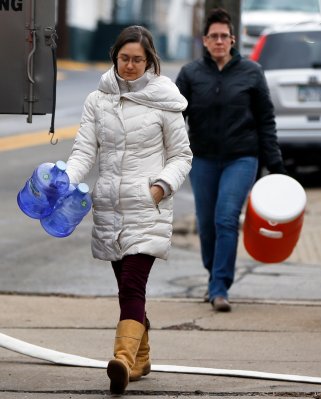 100,000 Pittsburgh Residents Told to Boil Their Tap Water
Next Up: Editor's Pick