Yes, You Need to Cool It On the Bacon

America’s inventory of frozen pork belly—which food manufacturers use to make bacon—is at its lowest point in 50 years, according to a recent USDA report. This, combined with news from the Ohio Pork Council that demand is outpacing supply, sent the Internet into a frenzy: Is there a bacon shortage on the horizon?

Industry experts say no. According to the New York Times, there’s little chance that restaurants and grocery stores start rationing the sizzling slices anytime soon. Still, this may be a good time for a reminder about why it’s a good idea to cut back.

Four slices thick-cut bacon have about 240 calories. They also contain eight grams of saturated fat and 880 mg of sodium—about 40% of your government-recommended daily values.

“The reason we recommend a limit on sodium is because it’s associated with a risk of high blood pressure as well as stroke,” says Lisa Cimperman, a registered dietitian at University Hospitals Cleveland Medical Center. The health effects of eating saturated fat are less clear, “but what we do know is that diets high in saturated fat have been associated with an increased risk of heart disease,” she adds. “About 68% of the calories from bacon come from fat—and about half of those are from saturated fat—so it’s definitely not the healthiest meat you can choose.”

Bacon and other smoked, cured and processed meats are usually treated with nitrates or nitrites—chemical added to preserve shelf life and enhance color. Diets high in processed meats have been linked to chronic health conditions including migraines, asthma, heart failure, kidney disease and several types of cancer.

Most notably, a 2015 study from the World Health Organization found that every daily portion (about 2 ounces) of processed meat raises colorectal cancer risk by 18%. While the study was unable to determine exactly why this link exists, scientists suspect that nitrates and nitrites are at least partially to blame.

Even bacon labeled as “uncured” or “no nitrate or nitrite added” can still contain high levels of these potentially harmful chemicals, says Guy Crosby, an adjunct associate professor of nutrition at Harvard T.H. Chan School of Public Health. These products are often treated with celery juice or celery powder, he says, which naturally contain high levels of nitrates.

Because of these potential risks, the American Institute for Cancer Research recommends eating no more than 18 ounces of red meat per week. Crosby’s advice when it comes to bacon is the same: “All things in moderation.”

If you’re preparing bacon yourself, says Cimperman, you can reduce its fat content by cooking it in the microwave (on a paper towel, to absorb grease) or baking it in the oven (on a rack that lets fat drip off), rather than frying it in a pan.

You might also consider substituting less fatty cuts of pork, like Canadian bacon. But beware of bacon replacements. Turkey bacon, for example, is still processed and high in sodium. “Because of the perception that it’s healthier, people tend to eat more of it,” Cimperman says.

On a more optimistic note, Cimperman says it’s important to put the WHO’s 18% statistic into perspective: “We’re talking about relative risk,” she says. “That means that, for a healthy person, eating bacon every day will raise their overall risk of colon cancer from something like 5% to 6%.”

“Certainly bacon is not a health food, and I don’t advise consuming it on a daily basis,” she says. “But if you eat a couple strips of bacon at brunch on the weekend, I don’t think it’s going to present a significant health risk—as long as your overall diet is sensible and healthy.” 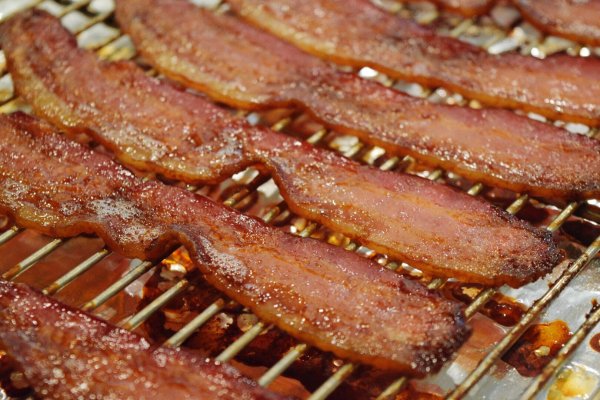 What Bacon Really Does to Your Body
Next Up: Editor's Pick