Adam Lambert on Touring With Queen, the Future of Pop Music and Gay Culture

Adam Lambert is headed out on the road—again. The Grammy-nominated singer-songwriter is set to tour North America this summer as the frontman of Queen alongside the band’s surviving members Roger Taylor and Brian May.

It’s far from the first time Lambert has taken the stage with the band, with whom he’s been performing in varying capacities since he appeared on American Idol in 2009, but this North American arena tour may be their most ambitious yet. For Lambert, the collaboration isn’t about an attempt to fill Freddie Mercury’s shoes: “I’m not trying to replace him!” Lambert says. “It’s very much a celebration of the legacy of the band. I’m a fan that’s gotten this amazing opportunity to sing this music—to bring the songs back to life.”

Lambert spoke with TIME about the dynamic with Queen, the sound of his new music and how things have changed for gay performers.

TIME: Did you have instant chemistry with the other guys in Queen?

Adam Lambert: It was obvious to all three of us that this felt really natural. They liked what I was doing musically. It just felt connected. Then things snowballed. They said after that [American Idol] performance, “Hey, we’re interested in doing something.” I said, “Yeah, me too, but hold on a bit—let me get my album out.” Then one thing after another happened.

What’s the demographic breakdown at these shows—is it primarily Queen loyalists, or your fans?

I don’t know if I’d be able to break down the pie chart for you, but I look into the audience and recognize fans that I’ve seen at my concerts. Then I see a lot of dads—people that are old enough to be my parents. Depending on where we are, there’s a lot of young people that come. At first, I didn’t know how the diehard Queen fans were going to accept me. That was intimidating. This is holy ground. But from the get-go, it was a warm reception. Over the years, it gets easier and easier.

What’s different about playing a Queen show as opposed to touring your own solo material?

A handful of the songs in the set are absolutely ridiculous—high camp. Because the audience already loves the song, I know I can push it as far as I want. It’s the most liberating thing. I wonder, whatever happened to watching an artist and having them make you laugh? Where is that in music? In the ‘70s and ‘80s, there was a lot of that. It was over the top. They weren’t taking themselves that seriously.

Has it gotten easier to be a male pop star? There certainly seem to be more on the charts than there used to be.

A lot of the big male pop artists that are successful right now, in my opinion, seem to have to fit a certain type of behavior. It’s very homogenized; a lot of them act and talk and dress the same. I think the idea is, “Do you feel like you could either be his best friend, or is he somebody you’d want to sleep with?” Those are the two types.

How do you think you fit into the current pop landscape?

That’s the hardest thing about being somebody that’s been in the business now since Idol seven years ago, which is where it all started. You’re a known entity—that’s a good thing. You have a built in fanbase. But sometimes changing people’s minds, or bringing them something that’s a new phase in your career, is a hard sell. Whereas people love discovery. If they love a new song: “I don’t know who the artist is, but the song is sick.” I don’t know how much people are paying attention to talent these days—I think it’s about vibe.

It felt like the sound of popular music was starting to turn toward more organic soundscapes, and now we’ve had another EDM bubble.

Tempos all shifted down. It’s always going to be the festival audience, and I’m sure that’s part of it for kids—they want to go to festivals and take drugs. But more important than the drugs, for some people, is being in that communal environment watching music. There’s something that we’re getting as a crowd, that you don’t get much of these days, because everybody’s behind a phone. Everyone is so detached from each other because they’re on their device all the time, so there’s some power in a live performance that you don’t get anywhere else.

You were the first openly gay recording artist to hit No. 1 on the album chart, which is a significant milestone. How have things changed for LGBTQ performers?

For awhile there, just being a gay artist in the music industry defeated me in moments. It messed with my head. It made me feel a little insecure. I don’t know how much the gay community actually supports their own—it would be nice if we could build each other up a little bit more. It’s us projecting our own self-loathing—but it’s interesting, because that’s generational too. I feel like the kids coming up right now are more hopeful. Look at all the gender fluidity stuff that’s become the conservation right now. The kids coming up right now are less hung up on stereotypical gender roles. It’s funny, because I look at kids rocking some nail polish or a little glitter and I’m like, “Do you guys think this is new? I’ve been doing this for years.”

What was the biggest challenge you faced?

When I auditioned for Idol, I was in a really good place with who and what I was. I had no shame. After Idol, there were moments where I felt ashamed of my identity because I was made to feel that way, indirectly—by the industry I was in, by being a public figure, by being judged by pockets of people that I never would have encountered before. I was running around with artists and weird kids and then all of a sudden, Susie Homemaker is weighing in on what I’m wearing or who I’m kissing. Therefore, the recording industry and radio are going, “Maybe that’s not mainstream. We’re not going to make any money on this because of Susie Homemaker.” That became such a mindfuck to me that I definitely had a moment here or there where I was like, “Should I even be doing this? Am I happy? Am I enjoying this? Is it worth it?” I would keep circling back to when I was onstage in front of an audience going, “This is what I’m supposed to be doing.” It was a lot I had to fight against.

I want to try something a little different than what I did before. It’s a lot bluesier and earthier. I want to get back to live instruments—I like guitar and bass. I want to do it more for me. If people are into it, cool. 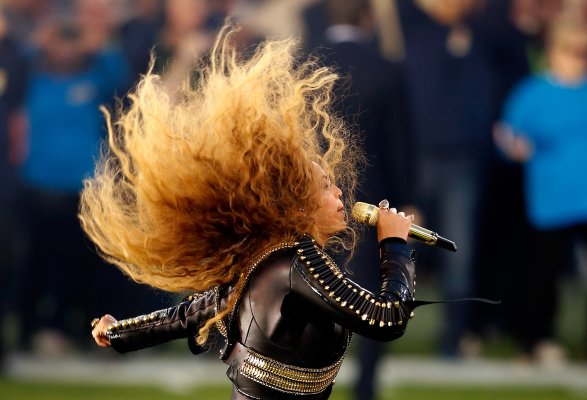 11 of the Most Controversial Super Bowl Halftime Shows
Next Up: Editor's Pick