Can Apple Make You Want An iPad Again?

Shopper is seen using the new iPad Pro in the Apple store of the High-end shopping district of Omotesando in Tokyo, Japan on November 12, 2015.
Anadolu Agency—Getty Images
By Lisa Eadicicco

When Steve Jobs unveiled the first iPad to an enthusiastic crowd in 2010, he called it a “truly magical and revolutionary product.” “It’s the best browsing experience you’ve ever had,” said the late Apple CEO.

That statement made sense in 2010. Smartphones screens were significantly smaller (typically about 3.5 inches versus five or six inches today), while laptops were heavier and lacked touchscreens. Despite being mocked early on, the iPad introduced the entire concept of a tablet to millions of consumers. (It wasn’t the first “tablet,” but it popularized the category.) Other manufacturers raced to introduce similar devices, though few matched the iPad’s appeal.

But seven years later, the iPad is in trouble. True, Apple still makes the most tablet shipments in the world, according to the latest estimates from research firm IDC. But it’s the biggest ship in a quickly evaporating lake. Global tablet shipments fell by 20.1% in the fourth quarter of 2016, IDC says. Apple’s total iPad shipments dropped 19% in its most recent quarter, it announced Tuesday, while revenue from the devices is down 22%.

Apple executives remain confident about the iPad’s future, at least publicly. “I still feel very optimistic about where we can take the product,” said Apple CEO Tim Cook on the earnings call earlier this week. During that call, Apple executives argued that changes in inventory levels and component shortages are at least in part to blame for poor iPad sales. And the iPhone remains a hot seller, taking some pressure off the iPad.

But experts say there’s a bigger issue at play: Apple hasn’t given consumers a compelling reason to buy an iPad, or to upgrade their existing model. Whereas the device seemed revolutionary seven years ago, today it’s stuck somewhere between our embiggened smartphones and ultra-portable laptops. That could leave shoppers wondering what the iPad is actually for.

“It’s very important that [Apple] figures out what the future of computing looks like outside of the iPhone,” says J.P. Gownder, a vice president and principal analyst at Forrester. “Whether that looks like a tablet, a hybrid, or a Mac, it needs to reassess what it is its customers are looking for.”

In what may be an attempt to address the tablet market’s existential crisis, Apple has been marketing its souped-up iPad Pro lineup as a laptop replacement. The Pro models offer speedier processors, bigger screens and are compatible with Apple’s Pencil stylus and keyboard accessories. But in some ways, the iPad’s laptop-like qualities are hampered by its software. Whereas most rival devices run full-blown Windows programs, the iPad can only run mobile apps. Software makers like Microsoft and Adobe have released lightweight versions of their popular services for the iPad, but they’re not always as easy to use with a touchscreen as they’re desktop cousins.

“You can’t really do spreadsheets, for example, on iOS,” says Gownder. “You can use a version of Excel, but without a mouse it’s very challenging.”

Some Apple fans have been urging the company to make an iPad with full desktop software, or, conversely, a MacBook with a touchscreen. “I think people have spoken in that they want a touch device that operates like a clamshell type of notebook,” says Patrick Moorhead, president and principal analyst at Moor Insights & Strategy. But multiple Apple executives have said that will never happen. Moorhead also floated the idea of promoting the iPad Mini as a gaming device. That’s not necessarily a bad idea, given the success of Nintendo’s 3DS handheld gaming devices. But Apple has never been a serious player in the gaming world.

Another tactic Apple might consider: Making the iPad cheaper. The $599-and-up iPad Pro, Apple’s most expensive tablet line, only accounted for a small portion of overall tablet shipments in the 2016 holiday quarter, according to IDC. The cheaper iPad Air 2 and mini tablets were responsible for most of Apple’s shipments. “If Apple lowers the price of its iPads, I think it might increase the volume,” says Mikako Kitagawa, a principal research analyst at Gartner. Of course, Kitagawa says there’s a catch: “It would have to sacrifice revenue.” So depending on how the math shakes out, that could be self-defeating.

The best approach may be for Apple to once again pull its trademark trick: Convincing the world it wants something revolutionary that didn’t exist yesterday. “What is needed is something new and fresh and different,” says Gownder. “Something where you say this is doing something distinctly different from what it did before that would make me actually want to buy it.”

But if the rumor mill is to be believed, Apple’s next iPads will be less than groundbreaking. Bloomberg reports the next models will have better display technology, along with improvements to Apple’s stylus accessory, the Apple Pencil. KGI Securities Analyst Ming-Chi Kuo, often an accurate seer when it comes to the difficult-to-read Apple, says the company may launch a new 10.5-inch iPad. Those kind of minor tweaks could result in accordingly minor sales bumps. But it’s unlikely they will be enough to fully resurrect this particular patient. 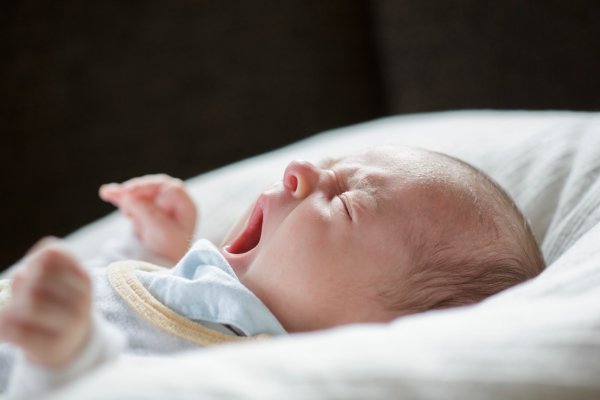 New Parent? These 8 Products Can Help
Next Up: Editor's Pick