James Blunt Wants You to Know He’s Not Just a 'Timid, Gentle' Lyricist

James Blunt’s fifth album, The Afterlove, is due out in March, and if first single “Love Me Better” is any indication, the supremely self-aware crooner behind 2004’s “You’re Beautiful” is onto a whole new genre. Contributions from hitmakers like One Republic’s Ryan Tedder and Blunt’s friend Ed Sheeran have heightened anticipation for this new phase in his career.

“I’ve been portrayed in a particular way by a record company who put these songs out and then made it, ‘Oh, isn’t he a romantic.’ I haven’t really had my own voice,” Blunt explains. So, in his own voice, here’s what Blunt has to say about his scathingly funny Twitter presence and how he’s finally making the music he loves. Watch the new video for “Love Me Better,” premiering on TIME, above.

TIME: It’s been a little over three years since you released Moon Landing. How has your music evolved between albums?

James Blunt: I should probably warn you that if you’re someone who’s liked my music before, this is a little different. I am a little nervous about that, because I don’t know how people will respond. I’ve done four albums with me on the guitar writing fairly sad—miserable even—songs. And having done that, I stopped the last world tour and went away for a little while.

I’ve taken two years over this album; it’s the longest I’ve taken. Rather than the 25 songs I write normally, I wrote over 100 songs. The last albums I’ve done… I haven’t really wanted to listen to them again and again. But this one was about making music that I love.

How would you describe that difference? More electronic? More pop?

The writing is not as dated. And because I was traveling around and writing and recording on the move, it was easiest to capture it on a computer, rather than always bringing a band along. I would dash over to London to meet Ryan Tedder in the Corinthia Hotel and write a song there… or fly from Venice to Amsterdam for three hours before he went onstage for the AMAs, and then fly home. Those moments have resulted in songs that have quite a lot of energy, and a different feel to them. It’s only after I recorded them I suddenly thought I might have to worry about whether other people would like them or not.

Let’s talk about this single, “Love Me Better.” The opening lines [“People say the meanest things / Yeah, I’ve been called a d***, I’ve been called so many things”] definitely seem to reference your haters. Are you speaking to that experience in this song?

Absolutely. I had a big hit. And then I had 12 years of aggression towards it. It was a strange experience. [These are] quite harsh words to hear at the top of a song, but that’s because it was quite harsh to receive that kind of feedback on a song that was just played a lot.

Absolutely. I’m just messing around on Twitter. The weird thing is, I’ve been portrayed in a particular way by a record company who put these songs out and then made it, “Oh, isn’t he a romantic.” I haven’t really had my own voice, other than the songs. And actually, I’ve never really been that way—this quiet, timid, gentle person that people thought I might be, writing these sappy kind of songs. Sure, the songs were sensitive in a way, but they weren’t how people thought.

If you think about “You’re Beautiful,” it’s not the song that people think it is. It’s about this guy who’s high as a kite stalking someone else’s girlfriend—and should be locked up and put in prison. But people think, “Ah, he’s a sweet romantic.” If you think that’s what romance is, then I think you’re pretty weird. So I suppose with Twitter, I can be myself rather than be what I was portrayed as.

Any advice for others who are targeted for their work about how to come back, or shrug it off with humor?

Firstly, I think it’s worth focusing on reality. I play every night in different places with an audience between 5,000 to 20,000 people, depending on which country I’m playing in. Yet I’m always asked about the one negative tweet; people always focus on the negative, even though there are 20,000 positives out there. And secondly, it’s worth remembering that the guy or girl—probably the guy—who’s posting something mean is sitting at home in their bedroom with the lights off and their trousers around their ankles. And they’re probably extremely lonely people, and not worth worrying about.

What’s the story behind the “Love Me Better” video?

What did you pick up from it?

I saw a pop star going through the motions—there’s wild partying, but there’s a whole interior life that keeps him disconnected.

Can we expect to see more of this side of you? More playfulness, less pure romanticism?

Yeah! The other part of the video is that we filmed everything so that I look really small the whole time, against all these incredibly tall people. It’s quite weird. I’ve always tried to mess around a little bit in videos. The first one I ever did was for a song called “High” and they buried me in the desert up to my neck. They actually threw cockroaches at me through most of the filming. 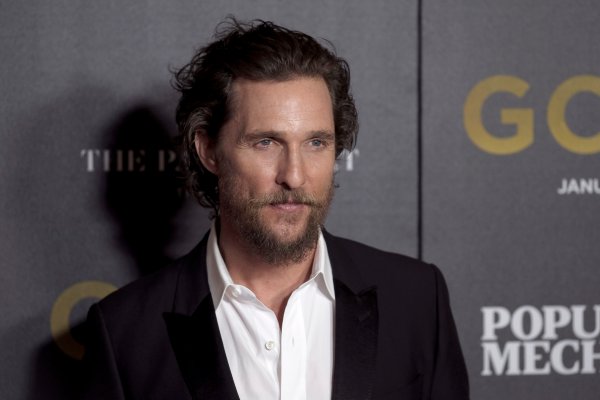 Matthew McConaughey Says We Need to 'Embrace' President Trump
Next Up: Editor's Pick