Why Legion Is Different From Other Superhero Shows

Between the Marvel television series on Netflix, the DC shows on the CW and a glut of spandex-clad superheroes on the big screen, we’re officially reached superhero saturation. So why would Noah Hawley, creator of the critically beloved Fargo series and bestselling author of Before the Fall, decide to make a foray into this genre? Because he’s not making a superhero show at all.

Legion is about a man, David Haller (Downton Abbey’s Dan Stevens) who has been diagnosed with a mental illness only to discover that after years of unexplained occurrences, hallucinations and nightmares, some of what he imagines may actually be real. Here’s everything you need to know about the X-Men spinoff Legion, premiering Feb. 8 on FX.

In the comic books, Legion is one of the most powerful mutants alive, but he suffers from mental illness

The son of Professor X, David Haller is a sort of anti-hero with mental issues, including dissociative identity disorder. A “legion” of different personalities emerge, each controlling a different superpower like telekinesis (the ability to move objects with the mind) or telepathy (the ability to communicate to others with only thoughts). Sometimes Legion is a good guy, sometimes he’s bad. Depends on the day.

In the show, Legion has been diagnosed with schizophrenia

When the show begins, David Haller is in some sort of mental institute after being diagnosed with schizophrenia. However, a series of incidents begin to reveal to David that what he believes to be hallucinations may be real: He may have special powers. How much of what he sees and experiences are imagined and how much is real is unclear to David. Similarly, whether the characters in the show are real or David’s personalities is a mystery.

Show creator Noah Hawley says he’s less concerned with the “running and kicking” that takes place in other superhero properties and more interested in getting inside David’s head: What is it like to be told all your life that you’re imagining certain things only to find out that some of those things are real?

Just as David will not be able to tell what is real and what is imagined, the audience, too, will be left in the dark, at least for awhile. Are the kitchen utensils that swirl around David’s head an astounding power or a psychotic episode? Are the characters real or figments of David’s imagination? Hawley emphasized, however, that he didn’t want the show to “be a puzzle box.”

“My hope is that when you watch the first hour, though it may not be always clear what every image means, and what the information is that you’re supposed to be gathering from every moment, those answers are coming. And so by the end of the first season, it’s going to be very clear what’s going on and what’s what,” he said. “The show doesn’t exist to manipulate and deceive you. It exists to put you in a character’s state of mind and then reveal reality as he discovers it.”

Fox, which owns the rights to Marvel’s X-Men, approached FX and Hawley with the idea of doing a spinoff show. Hawley came up with a surreal take on the Legion story.

But you won’t see any Wolverine cameos

If you haven’t seen a single X-Men movie, you won’t have any problem following Legion. Hawley said he wants Legion to “stand on its own,” without borrowing any of the franchise’s characters or actors. It’s unclear from the first episodes when the show even takes place in the X-Men timeline. Much of the costumes and decor of the rooms feel 70s inspired, but there’s plenty of futuristic technology mixed in.

Legion is brought to you by the creator of Fargo

Hawley, as mentioned above, is the mastermind behind FX’s hit television series, Fargo. The show mimics the tone of the Cohen brothers but presents an entirely new story—with a new set of characters and actors—each season. Its first installment earned a whopping 18 Emmys. Hawley has been on a roll ever since: As Legion premieres, he’s working on the third season of Fargo, an adaptation of Kurt Vonnegut’s Cat’s Cradle for FX, a film adaptation of his fifth novel, Before the Fall and his directorial debut, Man Alive. Legion is like Fargo insofar that it’s more artistically ambitious than most of what’s on TV right now.

Except Legion is way more surreal than Fargo

Remember the unexplained shower of fish in Fargo? Or the UFO sighting? Expect much more of that kind of surrealism in Legion. The premise of the show is that neither David Haller nor the audience knows what is a hallucination and what is David’s power at work. The result is a Bollywood-style dance scene in the middle of the first episode, a murderous cartoon boy come to life in the form of paper mache and the juxtaposition of 70s furniture and futuristic technology. 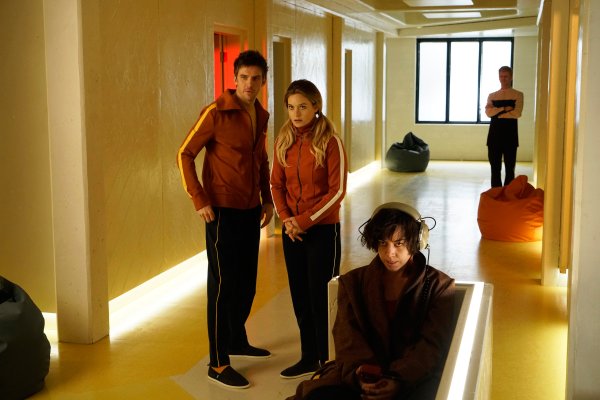 Review: Legion Is a Dazzling Misfire
Next Up: Editor's Pick