Everyone’s favorite honey-loving bear is having a pop culture renaissance this week, thanks to the viral spread of an 3D animated clip of A.A. Milne’s beloved character doing the “Gangnam Style” dance. Although the GIF of Piglet’s pal grinning goofily can actually be traced to a 2015 YouTube clip, it’s only now that Twitter users are getting their hands on the mesmerizing video—and setting it to more contemporary music.

In fact, an entire account dedicated to the dancing bear (@WinnieDancing) has even attracted over 35,000 followers in just a few days, where the audience is treated with identical GIFs of Pooh Bear set to a number of different songs: doing his best Drake impression to “Work,” breaking it down to “Bad and Boujee,” and rocking out to “All Star,” for instance. Surprisingly for a stuffed animal not normally known for his rhythm, his dancing manages to match the beat of every one of these hits. Turns out the lazy ol’ bear has some moves after all, even if Eeyore might not approve. 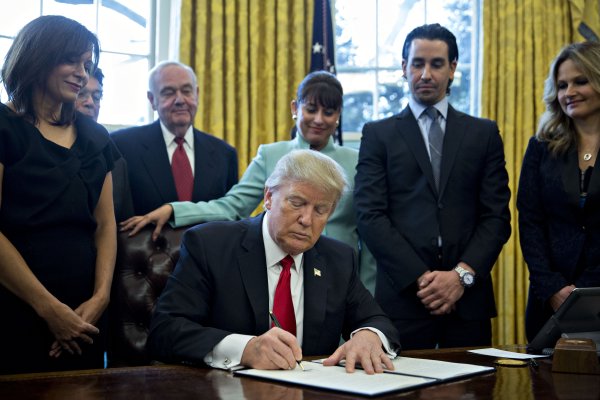 The Internet Is Having a Field Day With This Photo of President Trump
Next Up: Editor's Pick