The little girl is wearing a hijab and the little boy a kippah. Both are sitting on their father’s shoulders, smiling to each other and holding signs in protest of President Donald Trump‘s immigration order.

The photo, shot by Nuccio DiNuzzo, a staff photographer at the Chicago Tribune, and published on Monday night, has since gone viral, with people praising the universality of its message. “I think that the picture speaks for itself,” DiNuzzo tells TIME.

DiNuzzo shot this photograph on the third day of the airport protests. “This was at O’Hare airport – terminal 5, which is the international terminal,” he says. “There were protests on Saturday and Sunday [when] up to 1,500 people showed up.” But yesterday, when the Tribune sent DiNuzzo on assignment, there were only about three dozens protesters and lawyers present. That was at 3:00 PM. Three hours later, after taking some photographs of the protesters’ signs and the lawyers waiting to assist arriving foreigners, DiNuzzo filed his images.

“All of a sudden, I saw two girls holding signs. They were wearing hijabs,” he says. “I always have an eye out for children in protests like that. That was my first picture. I asked their dad for their names. They had baked some cookies to bring to the attorneys. I thought that was great.”

That’s when DiNuzzo’s instinct kicked in. “It was just a matter of waiting for the moment where I could see them looking at each other. I got maybe one frame of that and that was it. I knew I had the picture.”

DiNuzzo filed the picture back to his editors, and while it was too late for the paper, it made it on the Tribune’s website and on Twitter, where it went viral.

“A lot of things that I post on Twitter, from sporting events and news events, [I] get a few re-tweets and a few likes. It’s rare that it gets in the thousands,” he says. “I had a Bruce Springsteen photo last year that he re-tweeted out to his fans and that was the most I ever got – over 2,000.”

But his photograph of the Muslim girl and Jewish boy has already amassed more than 7,000 re-tweets and 10,000 likes.

For DiNuzzo, who has been a staff photographer with the Tribune for the last 25 years, the image has a universal message. “It makes people feel good,” he says. “It’s affecting people emotionally.” And that’s what photography is all about, he adds. “You want to get right to their heart.” 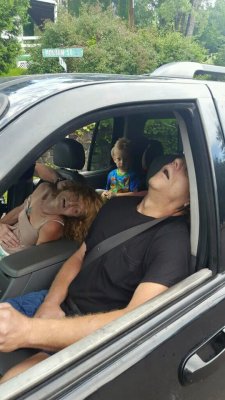 The Story Behind the Viral Photo of an Opioid Overdose
Next Up: Editor's Pick