In just a few weeks in office, President Trump has made striking use of his power to issue Executive Orders, using them to pave the way for the repeal of the Affordable Care Act, change the rules about federal regulations, and enact a controversial ban on admission to the U.S. for range of immigrants and refugees.

But historically, most executive orders have been issued with little fanfare, says Kenneth R. Mayer, a professor of political science at the University of Wisconsin-Madison and author of With the Stroke of a Pen: Executive Orders and Presidential Power. “Most real executive orders are pretty routine,” Mayer tells TIME. “In the 1930s and ’40s, Roosevelt had to use an executive order every time he wanted to exempt someone from mandatory retirement.”

But that doesn’t mean that unilateral executive action hasn’t had a major effect on the history of the United States.

Some of the most important unilateral executive action in American history, like George Washington’s Neutrality Proclamation and Abraham Lincoln’s Emancipation Proclamation, have not technically been executive orders. Mayer says that, for this reason, the number of orders a President issues is not a good measure of how he used unilateral power. Nevertheless, over the years the executive order has become a more controversial tool and more “prominent in the public psyche,” perhaps partly because its formality makes such orders easy to track.

“A person’s attitude about executive action depends almost entirely on whether the President is of your party,” Mayer says, but the fundamental question of the limits of Executive Branch power dates back to the earliest days of the republic. “Hamilton and Madison fought over it. Those debates have not been tempered in the centuries since.”

And perhaps with good reason, as that power has greatly shaped the history of the United States. Here are nine 20th-century Executive Orders that show just how far that influence can go:

Franklin D. Roosevelt’s Executive Order 7034 (1935): This order established the Works Progress Administration, among other agencies. The New Deal spending machinery was so complicated that, TIME reported back then, that the President himself gave the press four separate “lectures”—complete with diagrams—explaining how the WPA “would keep its finger on the pulse of all projects started.”

Franklin D. Roosevelt’s Executive Order 9066 (1942): This post-Pearl Harbor order, now infamous, gave the military the ability to mark out areas from which it would be possible to exclude “any and all persons.” The upshot of this move was that more than 100,000 Japanese-Americans and Japanese immigrants were sent to internment camps.

Harry Truman’s Executive Order 9981 (1948): This order declared that “there shall be equality of treatment and opportunity for all persons in the armed services without regard to race, color, religion or national origin,” leading to the desegregation of the American military.

Harry Truman’s Executive Order 10340 (1952): This order directed the Secretary of Commerce to “take possession of” American steel plants. The order put to rest a threatened strike, which Truman held to be a military necessity, but in doing so it raised “a great constitutional question,” as TIME put it, about the limits of executive power—and in fact, after the Supreme Court struck down the Order, it turned out that the resolution of that question was where its influence was felt most in the long run.

Dwight Eisenhower’s Executive Order 10730 (1957): This order, in reaction to the resistance of “certain persons” in Arkansas to federally mandated school integration, particularly at Little Rock’s Central High School, directed the Secretary of Defense to federalize National Guard units in Arkansas, which had previously been used by Gov. Orval Faubus to prevent integration. As TIME reported, the President was left with little choice but to sign “a historic document” that “ordered Secretary of Defense Charles Wilson to use the armed forces of the U.S. to uphold the law of the land in Little Rock.”

John F. Kennedy’s Executive Order 10924 (1961): This order established the Peace Corps, which, as TIME put it, “captured the public imagination as had no other single act of the Kennedy Administration.”

Lyndon Johnson’s Executive Order 11246 (1965): This order made the U.S. Government practice equal opportunity in hiring, and demanded that each executive department set up a “positive, continuing program” to support equal employment opportunity. The order extended to government contractors as well. According to the Department of Labor, that provision of the Executive Order now protects about 20% of the entire American workforce from discrimination.

Ronald Reagan’s Executive Order 12291 (1981): This order, signed by President Reagan almost immediately upon taking office, required cost-benefit analysis to be applied to every “regulatory action” undertaken by the Federal government, signaling a broad shift toward deregulation.

George W. Bush’s Executive Order 13228 (2001): This order established an Office of Homeland Security, which grew into the Department of Homeland Security that, as TIME put it, merged “merged 22 federal agencies into a single department whose primary mission is fighting terrorism.” 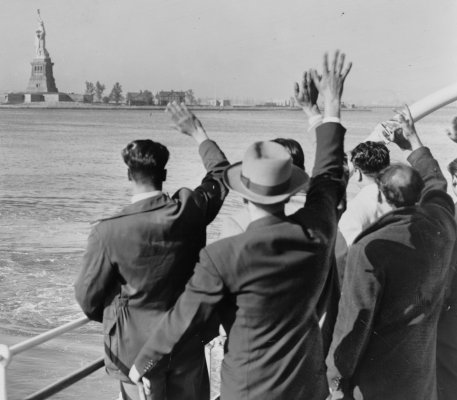 What to Know About the 1952 Law Invoked by President Trump’s Immigration Order
Next Up: Editor's Pick