Explicitly Christian signs have featured prominently in the recent protests against President Donald Trump’s immigrant and refugee ban: “Love thy neighbor,” “Jesus was a refugee,” “You call yourselves Christians?”

I sympathize deeply with the protesters’ cause. But it is a mistake to act as if Christianity provides definitive ethical guidance. It’s true that the clarity of righteousness can inspire confidence and solidarity — we are Christians; the bad people are not. The sign holders seek to provide that clarity, and are convinced their message will remind other faithful to follow the agreed upon path. Unfortunately, it will not. In truth, there is no such path, because there is no such thing as Christianity.

It’s not that Christians aren’t united by their faith in Christ. But the practical implications of that faith vary dramatically. When it comes to ethics there are, in fact, many Christianities, each of which is as much a product of historical, cultural and political circumstances as it is of God’s eternal word. As a result, it can be “Christian” to build a wall or to fight a war or protest either, depending on how circumstances have come to define your interpretation of the Scripture.

Before the election, for instance, Pope Francis repeatedly denounced the building of walls as un-Christian. “Dear brothers and sisters — all walls fall,” he cautioned in November, echoing his blunt statement about wall building from February 2016: “This is not the gospel.” Yet on the morning of Trump’s inauguration, in stark contrast to the Pope, Pastor Robert Jeffress praised the building of walls as sanctioned by the Bible. “[The] first step of rebuilding the nation was the building of a great wall,” Jeffress said, referring to the prophet Nehemiah’s work building a wall around Jerusalem. “You see, God is not against building walls!”

Where I teach, in Harrisonburg, Va., there is a large Mennonite population. They, like Quakers and other pacifist Christians, take Jesus’s teachings to mean that Christians should never participate in war. Some refuse to pay taxes that might support the military. Needless to say, there is ample material in the Bible to back up their arguments.

Nevertheless, their perspective is a minority one. Despite widespread understanding of Christ as a radical pacifist — “turn the other cheek” — the vast majority of Christians still believe in justified violence. Many Catholic theologians have vindicated the Crusades as bellum sacrum (holy war), and thus a legitimate response to Muslim violence against Christians. Similar rationale justifies Christian participation in war today, and there’s no better example of it than a 2014 speech by Trump’s adviser, Stephen Bannon, delivered to a conference hosted in the Vatican. “We’re at the very beginning stages of a very brutal and bloody conflict,” Bannon warned, telling his audience that “the people in the church” must “bind together and really form what I feel is an aspect of the church militant.”

Violence and walls aren’t the only issues that divide the faithful. Christian leaders and laity have been split by every fundamental ethical question: abortion, torture, divorce, the rights of both slaves and the LGBTQ community, women’s suffrage. And of course, the same is true of every religion: just as there are Christianities, not Christianity, so too there are Buddhisms, Judaisms, Hinduisms and Islams, and the inexorable march of history will produce countless others.

Religious texts and teachers are not self-interpreting. Fallible humans must make sense of them, using virtues that transcend religiosity: rationality, empathy, courage and humility.

Implying that authentic religiosity, Christian or otherwise, is defined by the incapacity to do evil is precisely what leads to tribalism and religious bigotry. Instead, fight such bigotry by recognizing that righteous faith has never guaranteed righteous action. Seek out political allies based on ethics, not theology. And understand that the best, most inclusive reason to admit refugees is not because it is Christian, but because it is good. 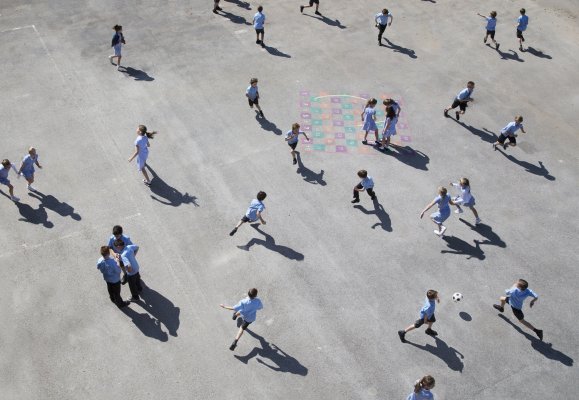 It's Time to Rethink Recess
Next Up: Editor's Pick