The exterior of the Museum of African American History and Culture as seen during the media preview day on Sept. 14, 2014.
Bill Clark—CQ-Roll Call,Inc./Getty Images
By Arica L. Coleman

When Black History Month begins on Wednesday, the annual observance will come, for the first time, with a new way for Americans to learn about that history: the National Museum of African American History and Culture (NMAAHC), which opened in September. It’s an important milestone, as the fight to create such a museum actually dates back to before Black History Month was conceived.

As TIME has explained, Carter G. Woodson established Negro History Week, the precursor to Black History Month, in 1926, as an initiative to make African-American achievements a permanent part of American public history. When the observance was formally declared on a national level in 1976, it was characterized by President Gerald Ford as “the opportunity to honor the too-often neglected accomplishments of black Americans in every area of endeavor throughout our history.”

Ironically, 1976 was the eighth consecutive year that legislation to create the NMAAHC had failed in Congress. Robert L. Wilkins, who chaired the NMAAHC Presidential Commission under George W. Bush, detailed the history of the museum in his book Long Road to Hard Truth: The 100 year Mission to Create the National Museum of African American History and Culture, which began with a simple question, “Why don’t we have a museum to tell all of those stories?”

Wilkins found the answer in a complicated narrative that began in 1915, the year of the 50th anniversary of the Union’s Civil War victory. The Committee of Colored Citizens, which had raised funds and organized social activities for black veterans visiting the nation’s capital — but which had been barred from social activities organized by the Grand Army of the Republic, which according to Wilkins was, “the preeminent organization of Union veterans” — decided to use the leftover funds as seed money for “a monument in this city to the memory of the colored soldiers and sailors who fought in the wars in our country.”

The following year, black leaders organized the National Memorial Association and embarked on a nationwide fundraising campaign to support the effort. Missouri Republican Leonida Dyer sponsored HR 18721, the first of many bills in support of the memorial. But America’s entry into World War I in 1917 brought the project to a standstill.

But the NMA did not give up. By 1920, the group had broadened its vision beyond commemorating black military achievements, to also include “Negro achievement in business, education, politics, the arts and every other aspect of American life.” On March 4, 1929, President Calvin Coolidge, on his final day in office, signed Public Resolution No. 107, which authorized the NMA to plan a building in Washington that would be “a tribute to the Negro’s contributions to the achievements of America.” The association, however, was required to raise $500,000 in private contributions before the Treasury would pitch in to help make the plan a reality.

That October, the stock market crashed, the Great Depression began, and the hope of a national memorial was once again deferred.

The post-World War II Civil Rights Movement gave rise to the Black Museum Movement which, according to From Storefront to Monument: Tracing the Public History of the Black Museum Movement by Andrea A. Burns, resulted in the establishment of several groundbreaking local museums during the 1960s and ‘70s, including the DuSable Museum of African American History in Chicago in 1961; The Charles H. Wright Museum of African American History (formerly the International Afro-American Museum) in Detroit in 1965; the Smithsonian Anacostia Community Museum (formerly the Anacostia Neighborhood Museum in Washington, D.C.) in 1967; and the African American Museum in Philadelphia in 1976. As noted by the African American Museum Association, founded in 1978, the “community” museum “may be identified both in terms of the physical — that is the predominately African American neighborhoods that typically surrounded these early museums — and the global community that comprises the African Diaspora.”

While the Black Museum Movement was successful on the local level, during this period, all efforts to gain federal support for the creation of a national museum failed.

As Wilkins has noted, just days after the assassination of Dr. Martin Luther King Jr., Rep. Clarence Brown proposed legislation that would create a national museum of Black history and culture in his home district in Ohio — a place called Wilberforce, which had been founded by manumitted blacks and had served as a stop on the Underground Railroad. But, though several pieces of legislation were proposed over the next few years to build a national museum at Wilberforce, the idea never gained congressional support, partially due to the idea (supported by the National Park Service) that any national museum of that sort ought to be operated by the Smithsonian Institute, and not in Wilberforce. But at that time the Smithsonian declined to endorse the project. By 1989, however, the Institute accepted a recommendation from “An African American Institutional Study” to create the NMAAHC.

During the 1990s the NMAAHC faced political opposition in both the House and the Senate, but bipartisan support gradually grew, thanks to the work of Rep. John Lewis and others. On Dec. 16, 2003, President George W. Bush signed H. R. 3491, which formally authorized the creation of the National Museum of African American History and Culture within the Smithsonian.

This year the NMAAHC will have its first of many annual Black History Month celebrations, at a site that for decades to come will stand as a shrine to the thousands which Wilkins aptly characterized as “brave and visionary souls,” who — like Woodson — maintained that Black achievement should be acknowledged and celebrated not just for one week, or for one month, but all year long. 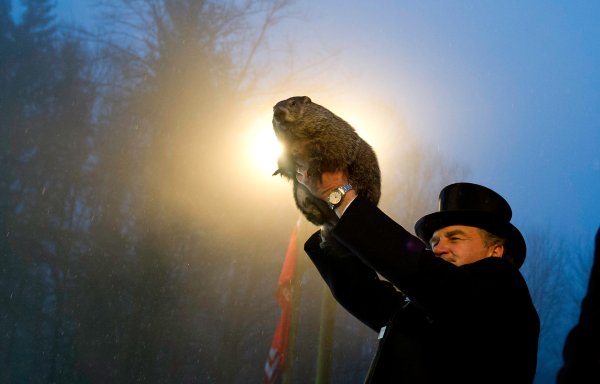 Here's How Groundhog Day Got Started
Next Up: Editor's Pick