Zeinab’s son Bahman has been studying for a PhD in Virginia since 2014. So when the chance came to visit him this January, she leapt at it. She applied for a visa at the U.S. consulate in Dubai via a travel agency in Iran—a common way to obtain documentation.

That’s where her passport was, ready to be processed, when Donald Trump’s executive order temporarily banning Iranians and nationals of six other majority Muslim countries from the U.S. was signed. Her dreams of seeing her son have vanished. “I was so, so happy and now I am so, so sad,” says the 60-year-old, who now faces separation from her son until he finishes his studies in two years. “Everyone always said America was the beacon of freedom, but after this I’m not so sure.”

Thousands like Zeinab — who did not want to give her last name for fear of impacting her son’s status in the U.S.— feel personally targeted by Trump’s order, especially as relations between the two countries had experienced an uptick since the nuclear deal in 2015 between Iran and 6 major world powers including the United States.

Now those improved relations are under threat, as Iran’s conservatives see the order as an opportunity to score political points with only months to go before a presidential election. Heshmatollah Falahatpisheh, an MP and part of the loosely knit coalition of hardliners and conservatives called Principalists, said it violated the terms of the nuclear deal he and others like him are highly critical of. “Any action by America that prevents the creation of appropriate political and trade relations after the nuclear deal is a direct violation of it,” he was quoted as saying by the Tasnim News Agency on Monday.

Iran’s moderate President, Hassan Rouhani, who is seeking re-election, took a more cautious approach and only reminded everyone of the futility of building walls between nations — perhaps mindful of the fragility of a nuclear deal which he has staked his presidency on, but that Trump has promised to tear up:

Rouhani’s muted response prompted his political opponents to take swings at his moderate international policy, which was based on his campaign promises of rapprochement with Western powers. “Mr. Rouhani, Trump won’t understand your metaphors on walls, I propose you speak to him as roughly as you speak to your internal critics,” said Ezzatollah Zarghami, the former head of Iran’s state TV during Ahmadinejad’s presidency and a critic of Rouhani.

“This government had promised to bring back honor to the Iranian passport, not only has that not happened but America is treating Iranians as a colonized nation,” Akbar Ranjbarzadeh, another MP from the Principalist faction, said according to the semi-official Fars News Agency on Jan. 26.

Rouhani swept to a victory in the 2013 elections on a platform of upheaving the economy and better relations with the world. He had hoped that the nuclear deal, which led to the lifting of stringent sanctions imposed on Iran, would help him achieve both but the average Iranian has yet to see a meaningful effect from the deal on their livelihoods.

Now, he’s trapped between a rock and a hard place. His foreign minister Javad Zarif has promised reciprocal measures, but should Rouhani do so too harshly he runs the risk of Trump moving to nullify his most significant achievement in office.

“This executive order is an insult to Iranians, the government must definitely respond to this act,” says Mohammad Marandi, a political analyst and professor at Tehran University, “But it is important that the world sees that Iran, unlike the Trump administration, is behaving in a responsible and moral manner.”

The nuclear deal, with its promise of roaring global trade and international investment in Iran as well as the sight of Iranian officials meeting and negotiating as equals with their American counterparts after 37 years of non-existent relations, was expected to help Rouhani cruise to a victory in his re-election bid in May.

But with the visa ban in place now and more hostile actions by the Trump administration highly possible, the elections seem wide open. “In many instances Rouhani has not achieved the results he had hoped for and promised in his first term and Trump’s actions will certainly have a detrimental effect on this,” Marandi said.

Even as Iranians like Zeinab come to terms with being denied entry to the U.S., perhaps few will feel as personally targeted by the order as the country’s President. 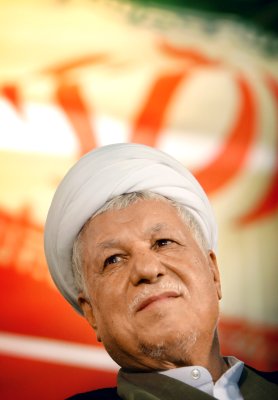 The Death of Iran's Ultimate Political Insider Gives Hard-Liners an Edge
Next Up: Editor's Pick