Paul Ryan talks with reporters during his weekly news conference at the US Capitol, in Washington, DC, on Jan. 12, 2017.
Chip Somodevilla—Getty Images
Ideas
By Eric J. Schneidewind

Medicare is being targeted by key congressional leaders for a sweeping set of changes that would dramatically increase healthcare costs for seniors and ultimately leave them paying more for their healthcare while getting less.

Making improvements to Medicare is a laudable goal, but doing it in a way that will cost the average senior thousands of dollars at a time in their life when they can least afford it is not. Neither is shortchanging the hardworking Americans who have paid into the system throughout their working lives.

Perhaps the most visible plan to cut Medicare is the one endorsed by House Speaker Paul Ryan, which would eliminate the guaranteed level of coverage that Medicare currently provides — e.g., covering hospital care and 80 percent of the total cost of doctor visits — and replace it with “vouchers” with which seniors would be directed to buy their own health insurance from the private sector.

Other plans being circulated in Congress contemplate similar approaches, the end result of which can best be described as shifting more risk to seniors – a risk that means either paying more for their healthcare or getting less of it.

Under these congressional plans, what happens to seniors if, for example, the values of the vouchers they receive fail to provide them with enough to buy what Medicare now covers? And what happens if the ongoing costs of their coverage exceed the amount of the vouchers they will now receive? The two choices appear to be a) either pay more out of their own pocket for the same coverage, or b) skip the medical care in question.

While Speaker Ryan has dubbed his voucher-based approach “premium support,” no one should be misled by the benign-sounding term. This is a clear downgrade of the Medicare benefits people have earned throughout their working lives, and the use of buzzwords like “modernization” and “choice” cannot hide the fact that seniors will be asked to bear more risk at greater personal cost.

To justify what they position as the “we-have-no-choice” necessity of their plans, congressional leaders have characterized Medicare, in operation for more than 50 years, as “going broke.” That’s simply not true. In fact, both the Medicare Trustees Report and The Congressional Budget Office report that Medicare’s fiscal strength has improved — not declined — in recent years and that the Medicare trust fund is fully funded through 2029 and 79-percent funded through 2040, a highly manageable shortfall that can be closed in coming years without experimenting with, or reducing, seniors’ healthcare coverage.

In an effort to make their plans to diminish Medicare seem more palatable, and be able to say that “no current Medicare beneficiaries will be affected,” the timeline for the proposed cuts is said to be pushed out a few years. But that fails to explain that when these new changes do kick in, current beneficiaries will be affected. By moving younger, healthier seniors into private plans via the use of vouchers, those now in the traditional Medicare program will see their own premiums rise dramatically. As a result, the Medicare benefits they have earned throughout their working lives and count upon may soon become unaffordable.

Fortunately for seniors and their families, those same congressional plans to alter Medicare’s fundamental promises will likely bump up against President Donald Trump, who campaigned on promises not to “touch” the benefits seniors have earned. The new President first expressed his views on the subject and distinguished himself from other Republican primary contenders and went on to make his commitment not to cut Medicare an ongoing element of his general-election campaign: “I am going to protect and save your Social Security and your Medicare. You made a deal a long time ago,” Mr. Trump said.

Not only do seniors nationwide strongly oppose such changes, but Medicare cuts and congressional plans to reduce Medicare’s long-standing promise to people run afoul of the new President’s often-stated views on the subject. For the sake of the tens of millions of Americans who now rely on Medicare or who will become Medicare recipients in coming years, let’s hope President Trump’s campaign promise not to touch Medicare holds true.

On behalf of not just our 38 million members nationwide, but of all older Americans and their families, AARP will continue to defend Medicare and its guaranteed level of coverage and we urge others to join us in that effort.

Schneidewind is AARP’s President and a member of the AARP Board of Directors. 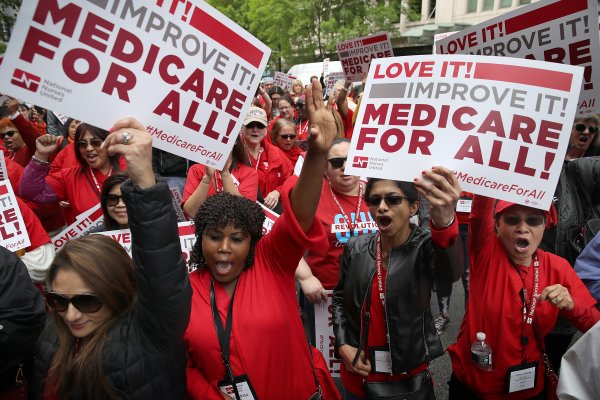 A New Generation of Activist Doctors Is Fighting for Medicare for All
Next Up: Editor's Pick