President Trump's Honeymoon is Over

President Trump’s White House is struggling to right itself after a weekend of confusion and chaos over his executive order suspending refugee admissions and banning travel from seven Muslim-majority countries. Dozens were detained at airports for additional screening amid an internal administration dispute over whether the order applied to U.S. legal permanent residents. (The White House said it does, but then backtracked amid the furor. Now all green card holders are presumed to be granted a waiver to the order to enter the U.S.) The order sparked widespread protests for the second time in as many weeks. The White House defended the implementation of the order and blamed the confusion on the media, but Republican members of Congress were among their fiercest critics on the drafting and implementation. Trump’s honeymoon is over.

Seeking to change the subject, Trump is moving up the timetable for his announcement of a Supreme Court Justice, tweeting Monday he will announce his pick at 8 p.m. on Tuesday. Expect the name to leak early. Given all the controversy, it remains to be seen how Senate Democrats will respond to the selection, and whether Senate Republicans will be forced to use the nuclear option—eliminating the filibuster entirely—in order to get Trump’s pick through.

On Saturday, Trump shook up the National Security Council, elevating his top political aide, Stephen Bannon, to a regular slot on the NSC’s Principals Committee. The reorganization also removed as regular members the Director of National Intelligence and the Chairman of the Joint Chiefs of Staff, who will now only attend when their issue areas are up for discussion. It’s a striking move to give Bannon, the White House chief strategist, a seat at the premier foreign policy decision-making table, but it reflects the former Breitbart CEO’s increasingly large role within the White House.

May reins in Trump. The Koch’s break with Trump. And Trump orders an ISIS review.

Republicans Begin to Break With President Trump
The honeymoon is over, TIME’s Philip Elliott and Alex Altman write

“To be clear, this is not a Muslim ban, as the media is falsely reporting. This is not about religion – this is about terror and keeping our country safe.” — The president in a statement Sunday, sent because the implementation has been anything but smooth 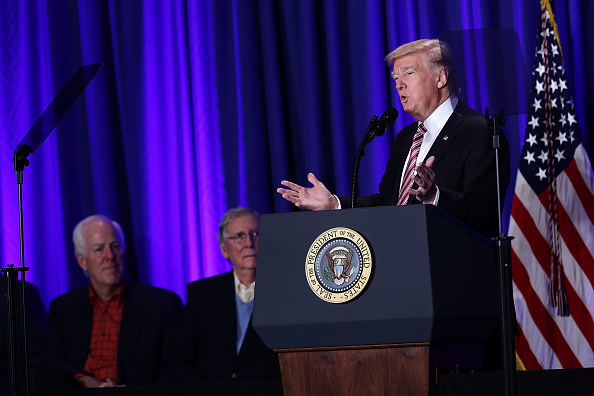 Republicans Begin to Break With Trump
Next Up: Editor's Pick