Azealia Banks Wants Rihanna to 'Shut Up' about Donald Trump

A Twitter post by singer Rihanna appears to have angered rapper Azealia Banks. Rihanna posted a tweet on Jan. 28 saying she was “disgusted” by President Donald Trump’s executive order that bans Syrian refugee resettlement and temporarily bars nationalists from seven majority Muslim countries from traveling to the U.S.

“Disgusted! The news is devastating! America is being ruined right before our eyes! What an immoral pig you have to be to implement such BS!!” Rihanna tweeted.

According to People Magazine and E! News, Banks responded in a now deleted post on Instagram saying the eight-time Grammy award-winning artist and other celebrities speaking out against the president should “shut up and sit down.” Rihanna joined protests against the policies of Trump at last weekend’s global women’s march. The Huffington Post has a screenshot of the post by Banks.

“As far as Rihanna (who isn’t a citizen, and can’t vote) and all the rest of the celebrities who are using their influence to stir the public, you lot really REALLY need to shut up and sit down,” People reports Bank’s now deleted post read. “Stop chastising the president. It’s stupid and pathetic to watch. All of these confused people confuse other confused people. Hoping the president fails is like getting on an airplane and hoping the pilot crashes. What makes you think, the the USA is going to enter the Middle East destroy a bunch of shit and pull out without any real repercussions [sic] ????”

Rihanna on Sunday posted what appeared to be a response to Banks in the form of a black and white Instagram photo with a one sentence caption. “The face you make when you a immigrant 🇧🇧 #stayawayfromthechickens #saveourhens,” the caption read, its hashtags likely referencing an earlier social media post by Banks, in which she appeared to have been cleaning up after chicken sacrifices. Banks identifies as a witch and said the sacrifices align with her practices as such.

According to People, Banks responded with a screenshot of that post with an angry message attached to it. That message has also been deleted. Rihanna then responded with an image of a person with what appears to be an American flag covering their head. The caption reads: “the face you make when you screaming in an empty room.”

E! News reports Banks did not end there. The rapper reportedly shared multiple additional posts, including two audio messages and a screenshot of a phone number. None of those posts currently appear on Banks’ Instagram page. 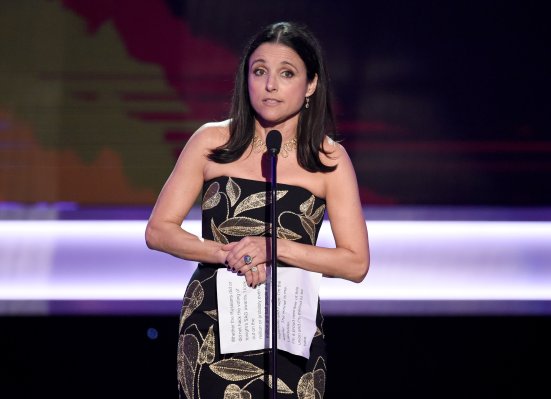 'This Immigrant Ban Is a Blemish.' Read Julia Louis-Dreyfus' Speech at the Screen Actors Guild Awards
Next Up: Editor's Pick