The Assassination of a Revered Muslim Lawyer Stuns and Saddens Myanmar

Many in Myanmar are in mourning this week after the assassination of a prominent Muslim lawyer and peerless symbol of the country’s democracy movement, Ko Ni, who was shot in the head at point-blank range on the pickup curb of Yangon International Airport on Sunday night.

Crowds steadily swelled in Yangon throughout the day on Monday, converging at Yayway Cemetery after a funeral procession for the revered pro-democracy advocate, former political prisoner and rare voice of the country’s Muslim community, whose prolific life was cut short at 65 years old.

Generations of Burmese scholars, activists, politicians and friends across the globe were shocked by the news; killings of this sort are extremely uncommon in Myanmar, and gun violence almost unheard of in the country’s largest city and commercial capital, Yangon.

Ko Ni, a legal adviser to the ruling National League for Democracy (NLD) party and an expert in constitutional law, is among the nation’s most high-profile Muslim figures. He was also a loyal supporter of Aung San Suu Kyi, the Nobel laureate and the country’s de facto leader since April of last year. The NLD issued a statement condemning his death on Sunday night, lamenting the loss of an “irreplaceable” member.

Photos shared on social media purportedly showed chilling images of the moments just before and after his death; one depicts the suspect, casually approaching in a pink T-shirt and flip-flops, standing behind Ko Ni with a gun to the back of his head as he reportedly holds his young grandson in his arms.

After fleeing the scene, the gunman was reportedly chased down by taxi drivers who witnessed the murder. One of the drivers, identified in local news media as 42-year-old Nay Win, was also shot and killed by the suspect in the pursuit; the others reportedly held the suspect captive until police arrived to arrest him.

The gunman’s motive is still unclear. Ko Ni arrived in Yangon on Sunday evening after joining a delegation to Indonesia, where he and about 20 other prominent figures, including the well-known activist Mya Aye, met with regional counterparts to observe peace-and-reconciliation efforts amid escalating religious tensions in both countries. Ko Ni, a high-profile Muslim in a predominantly Buddhist country, has received multiple threats in the past, his friends say.

“Sometimes I was worried for him, because he was always targeted by the extremists for his religion,” says Chit Min Lay, a former student under Ko Ni and a member of Myanmar’s 88 Generation — a group that spearheaded the country’s pro-democracy movement in 1988. “But we don’t know exactly why [he was killed].”

Although he was an almost universally admired figure, Ko Ni accrued powerful enemies both for his status as a Muslim public figure — among other things he was the patron of a newly formed Myanmar Muslim Lawyers Association — and as a vocal opponent of the country’s military-drafted constitution, the army’s most crucial tool for maintaining power.

While it’s still unclear exactly why he was targeted, his abrupt death came at a time of heightened religious tensions. Myanmar has grappled for years with an alarming rise in anti-Muslim sentiment and vitriolic hate speech. Several bouts of deadly riots since 2012 have overwhelmingly affected Muslim communities, which have no representation in the newly elected government. Ko Ni, as a senior adviser to the ruling party, was among the most — if not the most — important voices for Myanmar’s Muslims.

Rights advocates and others have issued a cascade of appeals for a thorough inquiry into his death. Amnesty International called Sunday for a “thorough, independent and impartial investigation” into the “appalling act,” while the International Crisis Group warned that “this killing has all the appearances of a hate crime” and must be promptly and credibly probed. 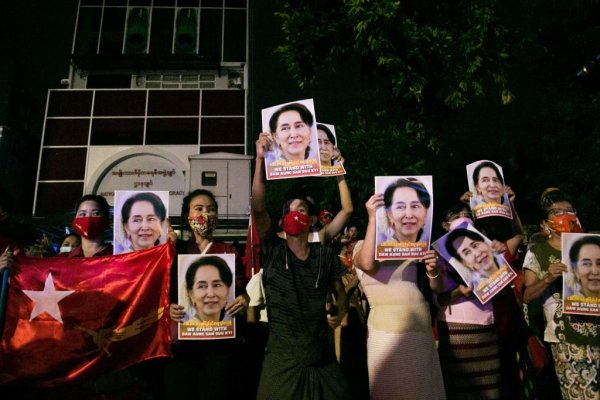