'Give Me Your Tired, Your Poor': The Story Behind the Statue of Liberty’s Famous Immigration Poem

In the wake of President Donald Trump’s executive order on immigration Friday, many critics quickly took up a familiar rallying cry, lifting words from the Statue of Liberty that have for decades represented American immigration: “Give me your tired, your poor / Your huddled masses yearning to breathe free.”

Circa 1880, American poet and essayist Emma Lazarus (1849-1887), who wrote 'The New Colossus,' the poem later engraved on the base of the Statue of Liberty.
Hulton Archive/Getty Images

Richard Spencer — the alt-right leader and white nationalist who last week unwittingly launched an internet debate over whether it’s OK to punch a Nazi — responded by criticizing the famous poem.

“It’s offensive that such a beautiful, inspiring statue was ever associated with ugliness, weakness, and deformity,” Spencer said in a tweet Saturday.

But the statue was not initially met with widespread popularity in the U.S. due to its cost, and some have argued that Lazarus’ sonnet, “The New Colossus,” actually imbued it with meaning.

The poet James Russell Lowell said he liked the poem “much better than I like the Statue itself” because it “gives its subject a raison d’être which it wanted before,” according to the New York Times.

“Emma Lazarus was the first American to make any sense of this statue,” Esther Schor, who wrote a biography on Lazarus, told the Times in 2011.

Lazarus, who was born in New York City in 1849 to a wealthy Jewish family, composed “The New Colossus” for a fundraiser benefiting the Statue of Liberty in 1883. (While the statue was a gift from France, the United States was responsible for covering the cost of its base and pedestal.)

Lazarus drew inspiration from her Sephardic Jewish heritage and from her work on Ward’s Island, where she helped Jewish refugees who had been detained by immigration authorities, according to the National Park Service.

“Wherever there is humanity, there is the theme for a great poem,” she once said, according to the Jewish Women’s Archives.

The poem was later published in New York World and the New York Times, just a few years before Lazarus died in 1887.

The Statue of Liberty arrived in New York in 1885 and was officially unveiled in 1886, but Lazarus’ poem did not become famous until years later, when in 1901, it was rediscovered by her friend Georgina Schuyler. In 1903, the last lines of the poem were engraved on a plaque and placed on the pedestal of the Statue of Liberty, where it remains today.

The poem, in its entirety, is below: 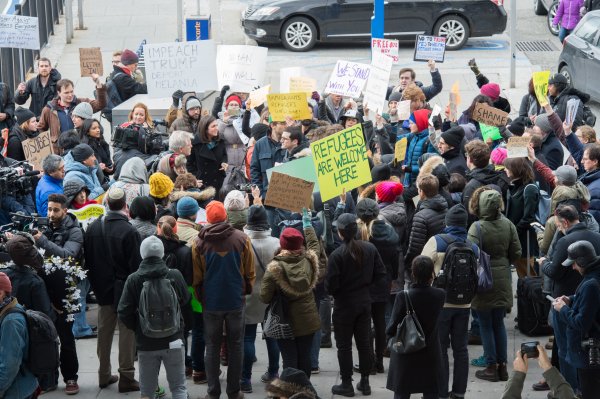