Darweesh had served as an interpreter for the U.S. military in Iraq, according to the Times. He was released Saturday afternoon, according to New York Reps. Jerry Nadler and Nydia Velázquez.

Omar Jadwat, director of the American Civil Liberties Union Immigrants’ Rights Project, said the Iraqi refugees are the first two petitioners in a class-action suit filed in the Eastern District of New York by lawyers representing a collection of groups, including the ACLU and the International Refugee Assistance Project at the Urban Justice Center.

“We’re doing what we can to gather intelligence of what’s going on all around the country,” Jadwat told TIME. He said he’s looking to the government to provide more information about how many refugees have been detained since Trump signed an executive order Friday that suspended the State Department’s Refugee Assistance Program and barred visa entry from seven countries, including Iraq and Syria.

“Immediately, what we’re trying to do is protect these people from being wrongly deported or detained,” Jadwat said. “Obviously, more broadly, you take the situation that these two men and their families are in and you multiply it by tens of thousands of people — more than that — who are subject to this ban.”

Betsy Fisher, policy director of the International Refugee Assistance Project, said the group had started preparing to handle this kind of situation when they saw a leaked draft of Trump’s order earlier this week.

“It occurred to us that this could be one potential result — that there would be people who would take off and would be in the air when the executive order was signed,” Fisher told TIME.

She said the group is now examining all legal options to challenge the order.

“These individuals are people who have been victims of terrorism and have survived violence and have waited for, on average, two years and gone through rounds and rounds of interviews. They’ve been in limbo,” Fisher said. “This is a profound disruption and a deep disappointment, but it also means that people will remain in danger while they’re waiting to see if they will have an opportunity.” 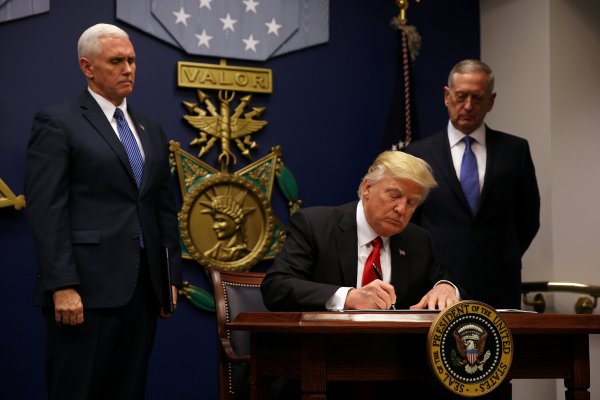 Trump Suspends Refugee Program and Bans Visas From 7 Countries
Next Up: Editor's Pick