President Trump Friday signed an executive order suspending the State Department’s Refugee Assistance Program and visa entry from Iraq, Syria and five other countries, saying they are “detrimental to the interests of the United States.”

The order, which has been widely anticipated, broadly follows the president’s campaign pledge to suspend immigration from several Muslim-majority countries until “extreme vetting” can be put in the place to prevent terrorists from entering the country.

The revised guidelines replace his campaign proposal to institute a religious test for immigration. The countries are those that have been designated as countries of concern by Congress and the Obama Administration, and also include Iran, Sudan, Somalia, Yemen, and Libya, a White House official said.

“I am establishing new vetting measures to keep radical Islamic terrorists out of the United States of America,” Trump said before signing the executive order at the Pentagon Friday. “We want to ensure that we are not admitting into our country the very threats our soldiers are fighting overseas. We only want to admit those into our country who will support our country and love deeply our people.”

The refugee program will be suspended for 120 days, according to the order, to allow increased vetting measures to be put into place, while visas from the countries of concern would be suspended for 90 days. Trump specifically suspended refugee admissions from Syria “until such time as I have determined that sufficient changes have been made to the [U.S. Refugee Assistance Program] to ensure that admission of Syrian refugees is consistent with the national interest.”

Trump also ordered the immediate suspension of the Visa Interview Waiver Program, which allows citizens of many countries to enter the U.S. on temporary visas without formal interviews with U.S. consular officers. It was not immediately clear how many countries would be affected by the suspension, as some waivers are guaranteed by statute.

Earlier Friday, Trump told CBN News that he would seek to prioritize refugee assistance for persecuted Christians in the Middle East.

“If you were a Muslim you could come in, but if you were a Christian, it was almost impossible and the reason that was so unfair,” Trump said of the existing policy. The executive order provides priority for persecuted religious minorities, “provided that the religion of the individual is a minority religion in the individual’s country of nationality.”

Trump’s order also requires the departments of State and Homeland Security and the FBI, to develop a comprehensive immigration screening program, to include increased in-person interviews, databases to cross-check documentation for fraud, and assessments of potential immigrants’ likelihood of “becoming a positively contributing member of society and the applicant’s ability to make contributions to the national interest.” It also requires a “mechanism” to assess whether applicants have intent to commit criminal or terrorist attacks in the U.S.

In a statement, Speaker of the House Paul Ryan praised the announcement.

“Our number one responsibility is to protect the homeland,” he said. “We are a compassionate nation, and I support the refugee resettlement program, but it’s time to reevaluate and strengthen the visa vetting process. This is why we passed bipartisan legislation in the wake of the Paris attacks to pause the intake of refugees. President Trump is right to make sure we are doing everything possible to know exactly who is entering our country.”

But Democrats on Capitol Hill, along with some Republicans, were critical of Trump’s announcement, arguing that the refugee screening program has already proven to be effective at keeping out those with ill-intent, and that banning refugees would be detrimental to the nation’s standing abroad.

In an interview with ABC News this week, Trump rejected criticism that his proposals could inflame anti-American sentiment abroad. 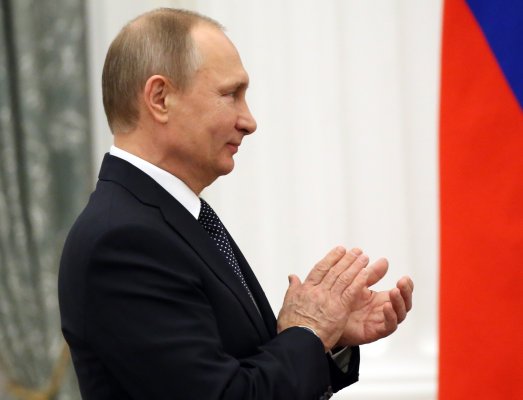 Trump and Putin to Talk on Phone This Weekend
Next Up: Editor's Pick