What Neil Gorsuch Means In the Battle Over Abortion Rights

Throughout his campaign President Donald Trump pledged to nominate an anti-abortion Justice to the Supreme Court. Now, liberals and conservatives alike are trying to determine what his nominee, Judge Neil Gorsuch, means for the fight.

“Millions of voters said [the Supreme Court] was the single most important issue to them when they voted for me for president,” Trump said, a sentiment that election day polling supports. Trump made no mention of Roe v. Wade or abortion in his introduction of Gorsuch.

Gorsuch has never ruled explicitly on the issue of abortion during his time on the 10th Circuit Court of Appeals. But his worldview may be evident in other rulings. In Hobby Lobby v. Sebelius, he sided with religious organizations that sought an exemption from the Affordable Care Act mandate that said companies must cover contraception. (The Supreme Court later upheld that decision.) People on both sides of the debate cite Gorsuch’s views on assisted suicide as potentially relevant to his position on abortion. In his book, The Future of Assisted Suicide and Euthanasia, Gorsuch argues that assisted suicide is immoral, and possibly unconstitutional, because it violates the right to life.

Both sides of the abortion debate are issuing opinions on Gorsuch. “President Trump, we believe, has kept his promise to nominate only pro-life judges,” said Marjorie Dannenfelser, president of the anti-abortion group Susan B. Anthony List, in a press conference about the nomination. The group and its super PAC, Women Speak Out, say they spent over $18 million during the 2016 election cycle to defeat presidential candidate Hillary Clinton and keep an anti-abortion Senate intact.

Several pro-abortion rights groups said Gorsuch’s position on abortion remains unclear, but that they oppose his nomination based on past statements by the President. “We take seriously [Trump’s] promise to nominate a justice who will vote to overturn Roe v. Wade,” said Marcia D. Greenberger, co-president of the National Women’s Law Center in a statement. “He promised to nominate someone in the mold of Justice Scalia, whose record on women’s rights is dismal.”

Though support of Roe v. Wade is at a record-high of 69% according to Pew, the Supreme Court pick and his or her stance on abortion was among the most important issues to Trump voters. “The nomination of an anti-abortion judge is a large reason conservative women supported [Trump] overwhelmingly,” said Penny Young Nance, CEO and president of Concerned Women for America, during the Susan B. Anthony List press conference.

Polling also showed that Evangelicals showed up for Trump in greater numbers than for Mitt Romney or George W. Bush, many citing abortion and the Supreme Court pick as very important issues. Trump said that his decision was in part based on the desires of these voters. “I think Evangelicals, Christians will love my pick,” the president said in an interview with the Christian Broadcasting Network.

“Seeing a constitutional conservative elevated to the highest court in the land, is the simple and compelling reason millions of Americans voted for President Trump,” said Charmaine Yoest, a senior fellow at the conservative non-profit American Values. “He kept his word.”

Regardless of how Gorsuch might vote in a case hingeing on abortion, the addition of any single conservative justice to the court is unlikely to lead to the overturn of Roe v. Wade. Justice Anthony Kennedy, usually the swing, has supported the broad outlines of Roe and joined the liberal justices in striking down parts of a restrictive Texas abortion law 5-3 in June. It would likely take Trump appointing a second nominee to the court — not to mention a case to make its way through the system — for the precedents set in Roe v. Wade to be tested.

Roe v. Wade established that the decision to terminate a pregnancy is between a woman and her doctor and is protected under the constitutional right to privacy. While Roe v. Wade itself would not come back before the Court, the threat — which abortion-rights advocates fear, and anti-abortion activists hope to make good on — is in eroding the rights that it safeguards.

It’s unlikely a case specifically challenging a woman’s right to an abortion would make its way to the Supreme Court; a lower court would probably refer to Roe v. Wade if, say, a state passed a law outlawing all abortion. Even if such a case did make it to the Supreme Court, legal scholars say it would be suprising for the current justices, Gorsuch included, to ignore 43-year-old law.

Instead, what may be tested at various court levels are certain aspects of abortion procedures or regulations for clinics that provide them. The federal government or a state government could pass a law circumscribing certain aspects of abortion procedures, such as a federal ban on abortions after a fetus is 20 weeks old — such a ban exists in 13 states, and Republicans in Congress have tried to pass a federal law — which could then be challenged in a case taken to the Supreme Court. Abortion-rights advocates believe that poor women would be first and most affected by laws that incrementally repeal abortion access.

Democratic lawmakers have expressed concern over Gorsuch’s stance on Roe v. Wade. On CNN, Senator Richard Blumenthal said that he will do everything to block Gorsuch from the Supreme Court if he thinks the judge has a “partisan” agenda. “A respect for not only Roe v. Wade but all the cases since Roe v. Wade… that kind of respect for precedent is in the mainstream. And coming into the court with the intention to overturn Roe v. Wade is a partisan agenda,” said Blumenthal.

Congresswoman Barbara Lee said in a statement to TIME that “Judge Gorsuch’s extreme record has done nothing to alleviate the fear of millions of women whose rights are on the chopping block.”

“Seven in ten Americans oppose overturning Roe v. Wade,” she added. “I urge President Trump and my colleagues in the Senate to listen to the American people and ensure that any potential Supreme Court Justice will defend women’s constitutional right to reproductive healthcare.”

Since announcing the Gorsuch nomination, Trump has taken to Twitter to attack what he called the “so-called judge” who blocked his travel ban, even going so far as to suggest that Americans should blame a future terror attack on the judiciary. Gorsuch reportedly told Blumenthal that such comments about the judiciary were “disheartening,” a sign that Gorsuch is firm in his convictions, even if they may not align with the president’s. Trump implied on Twitter that Gorsuch’s views on the matter were misrepresented. 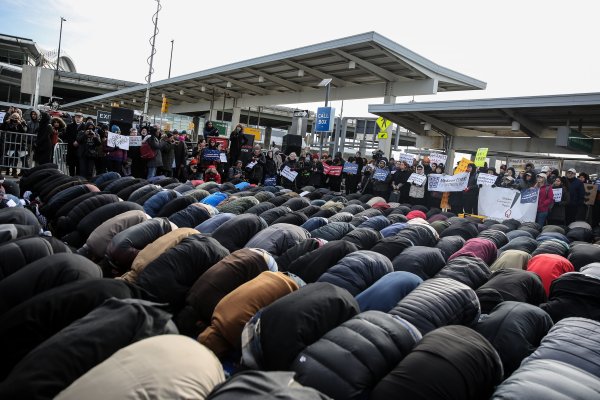 Shakira: America Must Protect All Our People
Next Up: Editor's Pick