The white woman who accused 14-year-old Emmett Till of harassing her — an accusation that led to his brutal 1955 lynching — has admitted to making up the claim.

Carolyn Bryant Donham’s accusation was at the center of a lynching that propelled the civil rights movement forward, notably after Jet published a photo of Till’s lifeless, unrecognizable body with his mother looking on.

Till, a black teenager from Chicago, was killed in 1955 while visiting family in Mississippi. He stopped at a country store and reportedly whistled at Donham, though it’s not known if Till really flirted with or whistled at her.

At the time, she was married to Roy Bryant, who kidnapped Till days later. Bryant and his half brother, J.W. Milam, beat and shot Till, fastened a metal fan around his neck and threw him into a river. Both Bryant and Milam were quickly acquitted by an all-white jury. During the trial, Donham testified that Till had grabbed and threatened her.

“That part’s not true,” Donham told historian Timothy Tyson in 2007 in interviews for his new book, The Blood of Emmett Till, which will be published Jan. 31. Donham, who is now 82, told Tyson that she could not remember the rest of what happened at the store on that day, according to Vanity Fair.

“Nothing that boy did could ever justify what happened to him,” she told Tyson, adding that she “felt tender sorrow” for Till’s mother, Vanity Fair reported. 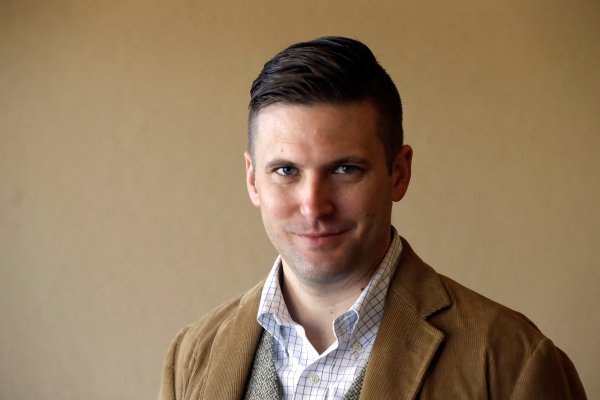 White Nationalist Richard Spencer Get Punched
Next Up: Editor's Pick