Watch Anti-Abortion Activists Take Part in the March for Life

Anti-abortion activists are gathering in Washington on Friday to take part in the 44th March for Life — and Vice President Mike Pence and President Donald Trump’s counselor Kellyanne Conway are set to address the crowds.

The March for Life, described on its website as “a peaceful demonstration to share the truth concerning the greatest human rights violation of our time, legalized abortion on demand,” is an annual event held on or around the anniversary of the Supreme Court’s decision to legalize abortion in the case Roe v. Wade, which legalized abortion in 1973.

According to Reuters, tens of thousands of supporters are expected to converge on the National Mall for the march, which goes to the Supreme Court (about 1.5 miles). As well as Pence, a longtime supporter of the anti-abortion movement, and Conway, New York Cardinal Timothy Dolan and several Republican lawmakers also are scheduled to speak.

The March for Life comes six days after Washington was flooded by hundreds of thousands of demonstrators for the Women’s March.

In his first week in office, President Trump signed an executive order reinstating the Mexico City Policy, a ban on funding to international organizations that either perform or provide information on the procedure. He has also said that he will nominate a Supreme Court justice next week, and he’s promised to appoint justices who would work to overturn Roe v. Wade. 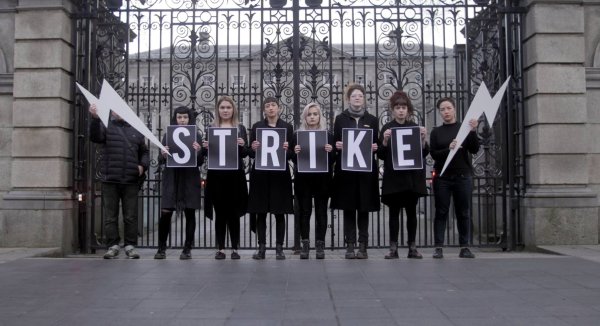 Irish Women Are Going on Strike to Protest an Abortion Ban
Next Up: Editor's Pick