President Trump signs executive orders in the Hall of Heroes at the Department of Defense on Jan. 27, 2017 in Arlington, VA.
Olivier Douliery—Getty Images
By Jared Malsin

President Donald Trump signed an executive order on Friday that temporarily bans new U.S. visas for citizens of seven Muslim-majority countries, in an act the administration says is designed to prevent “terrorist attacks by foreign nationals.”

Yet counterterrorism experts say that the policy could backfire by providing more fodder for propaganda and recruiting by jihadist groups that aim to demonize the United States.

In interviews, analysts and former counterterrorism officials said the proposed immigration restrictions would reinforce the jihadists’ binary worldview in which a monolithic West conspires to oppress Muslims across the planet. According to the executive order, the new president’s policy will suspend new visas for people from seven nations: Iran, Iraq, Syria, Sudan, Libya, Somalia and Yemen. The executive order targets citizens of those countries almost indiscriminately, a policy that experts say fuels a narrative of American victimization of Muslims, in which jihadist groups market themselves as the resistance to that domination.

“There is no doubt in my mind that, wherever they are, propagandists for groups of the likes of the Islamic State will be looking at what’s happening and rubbing their hands with glee. Because this is exactly the kind of world they want to inhabit. It’s a world that reifies their ideology,” says Charlie Winter, a senior research fellow at the International Centre for the Study of Radicalisation and Political Violence in London.

Groups like ISIS and al-Qaeda could use the new restrictions to sway new followers around the world, says Clint Watts, a former FBI counterterrorism special agent and U.S. Army infantry officer.

“If anything it’s going to antagonize the narratives of terrorists. They’re going to use this as further indication that we have a war with Islam, and they’ll use that for marketing purposes,” says Watts, who is also a fellow at the Foreign Policy Research Institute, a think tank in Philadelphia.

Trump’s own rhetoric suggests he intends to single out Muslims. The new executive order also closes America’s borders to refugees, and halts the arrival of all Syrian refugees indefinitely. On Friday he said that, once the temporary ban on refugees is lifted, he intends to favor Christian refugees over Muslims. “If you were a Muslim you could come in, but if you were a Christian, it was almost impossible,” he told Christian Broadcasting News.

Trump’s proposals come at a moment when the world’s deadliest terror group, ISIS, is steadily losing ground on battlefields in Iraq, Syria and Libya. As its self-proclaimed “caliphate” collapses, the group is expected to return increasingly to the tactics of insurgency and traditional terrorism, and rely on a diffuse network of operatives and acolytes around the world. Experts argue that over the long term, defeating ISIS and groups like it requires an effort to discredit jihadist militancy as an ideology. Trump’s immigration plan undermines that effort, says Watts.

“It’s exactly al-Qaeda’s original narrative from the 90s, when they said that, ‘They don’t want you beyond oil. They are not open to Islam. They don’t respect it. It’s a Christian country that has a bias toward Christianity,’” he tells TIME. “We’re talking about winning the war on ideas. How do we win the war on ideas when we just confirmed their idea is correct?”

Trump’s proposed policy also does not address the problem of jihadist recruits and sympathizers who originate in the United States and Europe. The United Nations estimated in 2015 that more than 25,000 so-called foreign fighters from 100 countries had gone to join militant groups in Iraq and Syria, including around 4,000 from Western Europe. A report by researchers at the George Washington University referred to official estimates of 250 Americans who traveled or attempted to travel to join the Islamic State in Iraq and Syria. Separately, a Brookings Institution report found that the variable that most reliably predicts which countries produce the most jihadist recruits was whether the country’s population spoke French. The profile of potential recruits varies wildly. ISIS seeks to recruit followers in the West who may be Muslim or non-Muslim.

In 2016, ISIS militant leaders shifted from urging Western supporters to travel to ISIS-controlled territory, to urging them to plan attacks in their home countries. A message attributed to ISIS spokesman Abu Muhammad al-Adnani last May told supporters, “The smallest action you do in their heartland is better and more enduring to us than what you would if you were with us.”

Many of the deadliest such attacks in recent years have been carried out by home-grown militants. Omar Mateen, the gunman who massacred 49 people at the Pulse nightclub in Orlando, Fla., was an American-born security guard. Rizwan Farooq, the health inspector who carried out the shooting at a public service center in San Bernardino, Calif., was born in Chicago. His wife and co-conspirator, Tashfeen Malik, was from Pakistan. Dylann Roof, the unemployed white supremacist who murdered nine African-American churchgoers in Charleston, S.C., was born nearby in the city of Columbia. Abdelhamid Abaaoud, the planner of the brutal attacks in Paris in November 2015, was born in Belgium.

As a result, experts say that even on its own terms, Trump’s immigration proposal overlooks the record of militant plots in the United States. Sixteen of the 19 hijackers in the Sept. 11, 2001 attacks came from Saudi Arabia. “We’ve had no one from these seven countries come and do an attack in the United States,” says Watts, referring to Trump’s list. “If you’re going to actually do this on the list that you’re going to protect Americans against potential terrorists — I am against any ban, but if you’re going to use such a system there are countries that would demand far more scrutiny than the seven they picked.”

If a group like ISIS were to attempt to send operatives from abroad, the proposed immigration controls could be circumnavigated.

“I don’t think that it will have a significant impact because again, there are so many ways to circumvent all of that, be it moving people across our southern border, our northern border, or moving people into the country on board small leisure water craft from Latin America and the Caribbean,” says Michael S. Smith II, a leading terrorism analyst whose firm, Kronos Advisory, has briefed the U.S. government. 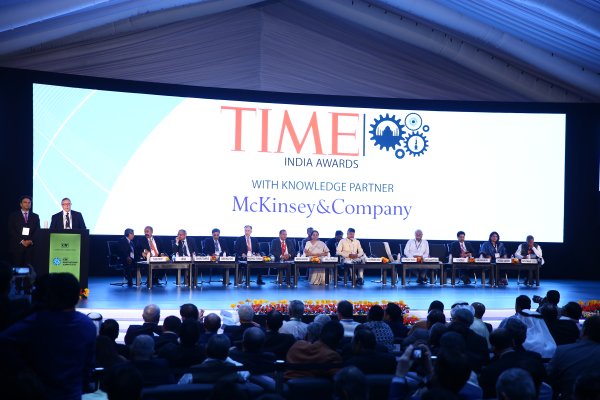 Here Are the Winners of the 2017 TIME India Awards
Next Up: Editor's Pick