Martin Schulz, former president of the European Parliament, looks on during a news conference in Berlin on Jan. 24, 2017.
Fabrizio Bensch—Reuters
By Simon Shuster / Berlin

Footage from the European Parliament tends to go viral about as often as a cooking show. But when it does, one of its livelier performers has long been Martin Schulz, the chamber’s former President, who this week became the lead contender to replace Angela Merkel as the Chancellor of Germany.

Bald and fastidious, with a mottled beard and outmoded glasses, he may not fit the stereotype of a political brawler. But unlike many of his peers in Europe’s stultifying bureaucracy, he has not been known to hold his tongue when provoked. During his 23 years as a member of the E.U.’s legislative body, he’s dished out nearly as much abuse as he’s taken from the populists who want to see the E.U. break apart.

That’s part of the reason his profile keeps rising. In his native Germany, a nation run for the last 11 years by the unflappable Merkel, Schulz’s history of combative and often emotional outbursts, usually in defense of the European institutions he serves, would strike a lot of voters as a breath of fresh air.

He will, of course, need more than that to win the German elections in September. The latest polls have his political party, the Social Democrats, trailing by a full 17 points behind Merkel’s conservative Christian Democratic Union, which has 37% support, the most of any party by far. But Schulz’s personal approval ratings have been roughly even with the Chancellor’s in recent months, not least because of his spirited and all-too-frequent appearances on TV talk shows and debates.

When in front of the cameras, he often seems keen to play up his own hot-headedness, especially when it comes to combating the populists of the Alternative for Germany party (AfD), who have outflanked Merkel on the right. “I am often accused of being too impulsive,” Schulz was recently quoted as saying by Deutsche Welle, the German broadcaster. “But you won’t get anywhere with right-wing extremists if you use finely crafted arguments. Sometimes a rough block calls for a rough chisel.”

Schulz’s personal history has certainly been rougher than most of his peers. In a political field crowded with former academics – Merkel, for instance, has a Ph.D. in chemistry, as does Frauke Petry, her main rival in the AfD – Schulz is one of the few high school dropouts. The son of a policeman from the small West German town of Würselen, he began a struggle with alcoholism while still in his teens, and once referred to himself in those years as a Sausack – literally, a sack of swine; figuratively, a troublemaker – and an awful student.

The main outlet for his energy always seems to have been politics. He joined the left-wing Social Democratic Party while in his twenties and, at the age of 32, was elected the mayor of his hometown, where he also ran a bookstore with his sister. After shifting to E.U. politics as a member of the European Parliament in 1994, he began a long-running feud with the chamber’s band of right-wing agitators, in particular the United Kingdom Independence Party (UKIP), which was then just starting to campaign for Britain to break away from the E.U.

During one legendary exchange in 2010, the UKIP leader Nigel Farage stood up during a session of parliament and told a senior E.U. technocrat, Herman von Rompuy, that he has “the charisma of a damp rag and the appearance of a low-grade bank clerk.” Farage continued: “I have no doubt that it is your intention to be the quiet assassin of European democracy.” Twisting the blade, he then referred to Von Rompuy’s homeland of Belgium as “pretty much a non-country.”

The target of the abuse sat back and took it in silence, only once rolling his eyes through a nervous smile. But Schulz exploded. “It’s not right that this man should be able to trample over the dignity of this house,” he shouted. Much of the following rant was lost to history, as Schulz’s microphone was disabled amid the crosstalk.

Over the years, scraps like that have earned him a reputation as the E.U.’s devoted enforcer, not simply committed to its institutions but willing to wade into the dirt and fight for them. This helped get him elected in 2012 to the presidency of the European Parliament, and it will now serve as one his advantages as he fights for the post of German Chancellor.

During most of Merkel’s tenure, the Social Democrats have governed in a “grand coalition” with her conservative party, serving as the junior partner in a government defined by a rather colorless brand of centrism. The greatest tensions within this coalition – and within the nation as a whole – arose from Merkel’s decision in 2015 to allow hundreds of thousands of migrants and refugees from the Muslim world to apply for asylum in Germany.

This effectively turned German politics on its head. By opening the doors to mass migration, Merkel’s traditional conservatives careened sharply to the left, thus creating ample room on the right for the rise of the AfD and nativists. But Merkel’s leftward drift has also gobbled up the turf that the Social Democrats had always occupied. Many Germans have thus found it hard to tell the difference between their two governing parties – and, as a result, are now less likely to vote for either one. While Merkel’s popularity plummeted in the wake of the migrant crisis, so did the ratings of the Social Democrats, who were seen as complicit members of her ruling coalition.

With the campaign season now underway, the key challenge for Schulz will be to distance himself and his party from Merkel’s conservatives wherever possible, effectively driving a wedge between them. Since he hasn’t actually worked in Germany in nearly a quarter century, this task will be easier for him than others in his party. He can at least pretend to be an outsider to the Berlin beltway; after serving under Merkel in the grand coalition, most of his fellow Social Democrats cannot.

His other advantage in this race may be his pugilism, which seems to be the political style of the season across the Western world. With the victory of Farage and his fellow populists in the Brexit referendum and the triumph of President Donald Trump, European statesmen have realized that cogent arguments – backed up by facts and logic – are not enough to win the day. A candidate also needs to breath fire when the moment calls for it.

But there are risks involved in having Schultz direct his fire at Merkel. When it comes to debating and oratory, the impassive Chancellor would not be likely to come out on top against him. Yet if that turns conservative supporters off Merkel, most would switch to the right-wing AfD before getting behind Schulz and his socialists. So in the end, a messy battle between him and Merkel may wind up serving the interests of the populists that both of them despise. 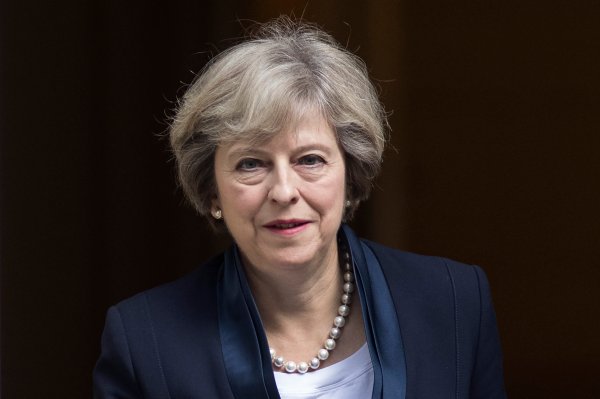 What Donald Trump and Theresa May Can Agree on Trade
Next Up: Editor's Pick