How Immigration Helped the United States Get Its First Subway System

By the time Boston opened the United States’ first subway system, roughly 120 years ago on Sept. 1, 1897, the need for such a network was inescapable.

As seen in this clip from the new PBS American Experience documentary The Race Underground, premiering on Tuesday, Boston wasn’t the only city where officials knew it was time to figure out a way for their growing populations to get around — but as explained by the film, based on a book of the same name by Doug Most, the Massachusetts capital illustrated the problem more than most other places.

The reason: the mass wave of migration seen by American cities in the late 19th century, as immigrants from around the world and Americans from more rural areas flocked to urban centers in hopes of a better life.

As a result, Boston was an extraordinarily crowded place, a relatively tiny city with hundreds of thousands of inhabitants and thousands of horses helping them get around. Smells, manure and noise assaulted the citizenry, and there was no sign of the problem letting up. As historian Clifton Hood explains in this clip, “The city is growing but the transit system isn’t growing with it.”

One solution, inspired by underground transportation systems that had been built in cities like London, was to move the streetcar traffic below ground.

It wasn’t an easy sell. Not only did politicians and business leaders disagree about the logistics, but many people resisted for a simpler reason: unfamiliar with the very idea of a subway, they feared that human beings simply weren’t supposed to be underground like that. Fears were compounded by the many graves uncovered in the process of digging.

Nevertheless, thanks to the influx of new residents, such concerns had to be resolved. And once Boston had proved the system could work, other cities — like New York — soon followed. 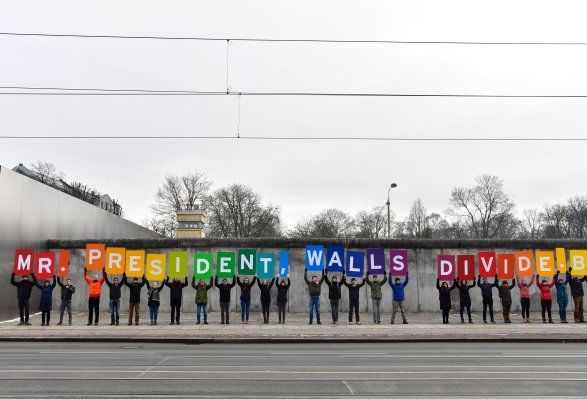 The History of Walls Is Long. Here's Where Donald Trump Fits In
Next Up: Editor's Pick