Jeff Bridges thinks America — its people and President alike — needs to stop pointing fingers, according to a noteworthy interview with CNNMoney.

In contrast to outrage or frustration that many have expressed before and during the presidential transition, Bridges channels The Dude, his Zen character in The Big Lebowski, on CNN. He focused on the peace and the beauty of life.

Bridges powers ahead in the same vein, adding people should check their anger and pursue peace, to see beauty that can “bloom” from it. He extolled the virtues of “not knowing,” and even quoted Russian author Aleksandr Solzhenitsyn.

“As The Dude might say,” Bridges summed up, “‘this aggression will not stand.'”

In the end, we will all have opinions, he said, but we can’t assume we know what’s right and what’s wrong.

“Just be with these people who feel opposite than you, and just kind of be with this uncomfortable feeling, like, what are we going to do? If you spend enough time in that situation, not knowing yourself, not having such a strong opinion that you can’t hear anybody else, some kind of loving action will come out of that.” 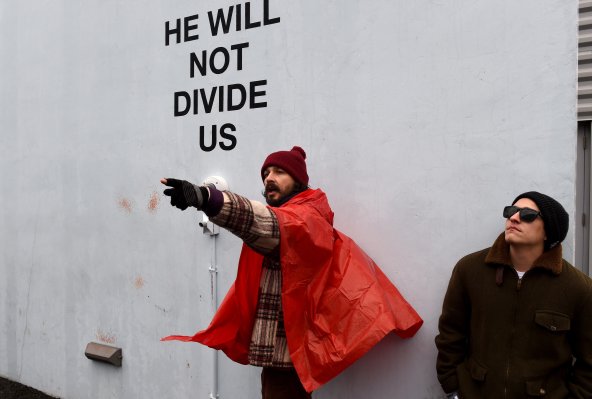 Shia LaBeouf Arrested at Anti-Trump Protest
Next Up: Editor's Pick