Chuck Cooper is a veteran of the culture wars with a long legal career arguing hot-button social issues cases before the Supreme Court. In 1982, he wrote a brief on a case arguing in favor of giving tax breaks to private schools that discriminated based on race; in 2013, he defended California’s ban on same-sex marriage.

George Conway, by contrast, is the consummate New York corporate lawyer. With a long career at the white-shoe firm of Wachtell Lipton, Conway has specialized in the very cosmopolitan area of securities litigation. He has only argued before the Supreme Court once, winning a unanimous decision on an important but decidedly un-sexy securities law case involving an Australian bank.

Now the two men are embroiled in a quiet but fierce competition behind the scenes for one of the most important but least known positions in the Justice Department: Solicitor General. Both are finalists for the post, sources say, and the outcome of the contest will matter. Long-called the “tenth Justice,” the Solicitor General represents the federal government in Supreme Court cases, and has broad authority in picking which cases to fight and which sides to take.

“The choice of SG is a huge thing,” says Lisa Blatt, a partner at Arnold & Porter, Kaye Scholer LLP who has argued 34 cases before the Supreme Court. “They’re the face of the Administration before one of our branches of government. It’s the face of the United States.”

Making the contest particularly intense is the fact that Cooper and Conway both have close personal ties to the new Administration. A D.C. insider, Cooper is a longtime friend of Attorney General-designate Jeff Sessions. Conway is married to Kellyanne Conway, one of President Trump’s most trusted advisers.

But the contest is about more than connections: in some ways it’s a pick between two sides of President Trump’s own political identity—hardline conservatism on social issues or a background in business. Which is why, as President Trump prepares to name his first Supreme Court nominee, people inside the Beltway are watching the Solicitor General race for signs of which way Trump’s judicial appointments will go.

Cooper is the more conservative choice of the two on social issues, which could make him a natural pick for a president who broke with the tradition of not applying litmus tests to judges and promised a staunchly pro-life justice for his first Supreme Court pick.

Cooper is perhaps best known for defending Proposition 8, California’s ban on gay marriage, before the Supreme Court in 2013. (Cooper’s daughter has since married a woman, and he has said his views on same-sex marriage are evolving.)

Charles Fried, who served as Solicitor General under President Ronald Reagan from 1985 to 1989, says he’s “very fond” of Cooper, who worked in the Civil Rights Division of the Department of Justice and then in the Office of Legal Counsel at the time. “He’s a true movement conservative, no question about it,” Fried said. “We had a lot of fights, because he wanted to go much further than I did… So we shouted at each other. But it’s all right, I always liked it.”

Fried cited a case from 1989 as an example: the Supreme Court held in City of Richmond v. J.A. Croson Co. that the city’s minority set-aside program, which gave preference to minority-owned businesses in awarding municipal contracts, was unconstitutional. Fried says Cooper was a “vigorous advocate” for his boss William Bradford Reynolds’ position at the time, which was that any remedy for racial discrimination has to be victim-specific. In other words, if there is evidence of racial discrimination in a program, the only person entitled to a remedy is the one who has been actually discriminated against. (Affirmative action, for example, does not fit this view.)

But it’s a different case from Cooper’s years working under Reynolds in the Department of Justice that could come back to haunt him in the nomination process. In 1982, Cooper helped get the Reagan Administration reverse a federal policy that denied tax exemptions to segregated private schools. The issue made its way to the Supreme Court with Bob Jones University, a school that had imposed a ban interracial dating. Cooper and Reynolds both signed a brief arguing in favor of giving tax breaks to schools that discriminate on the basis of race. The Supreme Court ruled 8-1 against them.

Still, in Cooper’s career spanning from his time in the Civil Rights Division and the Office of Legal Counsel to now as a founding member and chairman of Cooper & Kirk, PLLC, many who know him say his pointed legal positions don’t translate to personal relationships.

While Cooper is an insider of the Washington legal scene, Conway is a New Yorker, currently a partner at Wachtell, Lipton, Rosen & Katz while also managing things at home with four children as his wife, Kellyanne, assumes a role in the White House. His relative lack of experience with the Supreme Court and federal government would in certain ways make him an unconventional pick for the job, but then again, Trump likes outsiders. A person with knowledge of Conway’s vetting process said he hasn’t met with Trump about becoming Solicitor General, but he did speak to Sessions for about an hour in December about the position.

Conway is an expert in securities litigation, arguing for his only time before the Supreme Court in 2010 in Morrison v. National Australia Bank. The Court ruled unanimously in favor of Conway’s side, holding that the Securities and Exchange Act does not apply to investment deals that occur outside the country, even if they have an impact in the U.S.

Robert Giuffra, a partner at Sullivan & Cromwell LLP, says Conway’s broad background in litigation areas like securities, mergers and acquisitions and contracts makes him a Solicitor General pick who could be uniquely suited to the new Commander-in-Chief. “For a president with a business-oriented perspective who wants to pick someone who will be a Solicitor General for business and economic issues, George Conway would have to be at the top of your list,” he says.

More broadly, Conway’s legal expertise could help him fit into the new political landscape being formed under Trump. “I think he would be able to talk the same language as the business lawyers [and] the people the Administration is populating Washington with,” says Lewis Liman, a partner at Cleary Gottlieb Steen & Hamilton LLP who has known Conway since they were classmates at Yale Law School.

While Conway’s professional background doesn’t overlap with many social issues, acquaintances say Conway is relatively moderate on those topics.

“George has a lot of different friends across the political spectrum in the legal community,” says one litigator in New York who has worked closely with Conway. “I’ve never considered him to be a hardcore right-winger, I’ve just considered him to have a somewhat more conservative outlook.”

Echoes Liman: “I don’t view him as an ideologue.”

Those who know both lawyers say that either of them would prioritize pragmatism and fine legal reasoning over idealism in facing a 5-4 split Court.

“I believe in what I would call the Rex Lee test for Solicitor General,” says Richard Bernstein, an attorney at Willkie Farr & Gallagher LLP. “He was Reagan’s very conservative Solicitor General but he was not a polemicist. He didn’t go down in flames losing a case just to make the people in the peanut gallery happy. And I think from my dealings with [Cooper and Conway], they’re incredibly talented and honest people, honest about the current state of the law, and honest in describing the facts. I think they both pass the Rex Lee test.”

Trump’s pick could also end up signaling something more concrete than a vision for the Justice Department: the Solicitor General post can be a launching pad for a seat on the Supreme Court. (One current justice, Elena Kagan, served as Solicitor General before her appointment.) So even as Trump prepares to announce his lead-off batter for the highest court in the land, D.C. insiders are watching who may be moving into the on-deck circle. 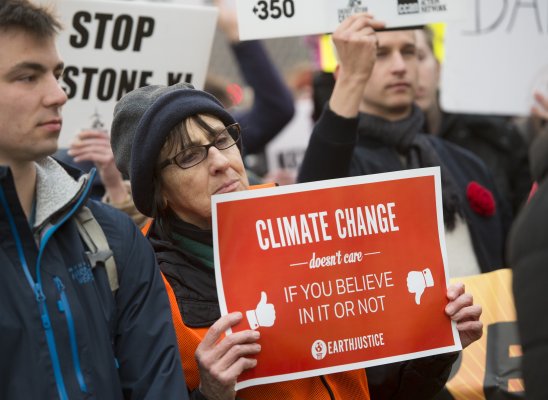 Scientists Plan a March on Washington to Challenge President Trump
Next Up: Editor's Pick