What to Know About President Trump's Immigration Orders

President Donald Trump green-lighted construction of a wall along the U.S. border with Mexico he repeatedly called for while campaigning via an executive action issued on Wednesday.

The wall plan is just one component of sweeping action Trump took on Wednesday to make good on campaign promises to clamp down on immigration to the U.S.

“Building this barrier is more than just a campaign promise, it’s a common-sense first step to really securing our porous border. This will stem the flow of drugs, crime, illegal immigration into the United States. And yes, one way or another, as the President has said, Mexico will pay for it,” White House spokesman Sean Spicer said.

Among the other actions taken on Wednesday: ending federal grant funding to sanctuary cities and states, which opt out of reporting undocumented immigrants; ordering the Department of Homeland Security to allocate funds or establish contracts for the construction or operation of detention facilities; ending of the policy known as “catch and release,” under which some immigrants are released from detention while they await a hearing with an immigration judge; and prioritizing the deportation of immigrants who have committed crimes.

The wide-ranging orders align with statements Trump made over the course of the campaign, though his promise to reverse President Obama’s orders that granted deportation reprieve to immigrants who arrived in the U.S. as children was noticeably absent from Wednesday’s round of orders. During the White House press briefing on Wednesday, Spicer reiterated earlier statements that the President’s priority would be on criminals.

“His priorities, first and foremost, are the people in this country that seek to do us harm,” he said. “The President understands the magnitude of this problem. He’s a family man. He has a huge heart.”

Reactions to Trump’s actions were swift. A bevy of immigration and refugee-rights groups joined a conference call on Wednesday morning to denounce them, arguing they would make the U.S. less safe and tear apart families and communities across the country. Advocates said the executive orders are “anti-immigrant, antirefugee and antireligious freedom” and signaled a relinquishing of American leadership across the world.

None of the advocacy organizations that were on the call — there were eight groups in total — said they had been briefed or received any guidance from the Trump Administration on the orders and future immigration plans. Marielena Hincapié of the National Immigration Law Center characterized it as a “complete lockout.” Advocacy groups are preparing to take legal action and provide lawyers to protect people who are concerned about pending visa applications, hate crimes and ongoing confusion at the U.S. border.

Mayors of U.S. cities that have adopted sanctuary policies are also planning a call on Wednesday afternoon and many have already signaled they are ready and willing to push back on Trump’s funding plans. At Wednesday’s briefing, Spicer said the President’s order would be directing officials to find and close “funding streams” to sanctuary cities.

“It directs the Secretary to look at ways — look at funding streams that are going to these cities, federal money, and figuring out ways to stop those streams,” he said.

One of the biggest promises Trump made while campaigning for office was the construction of a “big, beautiful” wall along the southern border, which immigration advocates and some hard-liners have both argued should not be a priority. Christian Ramirez of the Southern Border Communities Coalition called the wall “political theater” on Wednesday’s call. Trump’s Secretary of Homeland Security John Kelly has even said the wall alone wouldn’t secure the border.

“A physical barrier, in and of itself, will not do the job,” Kelly said during his Senate confirmation hearing. “It has to be a layered defense.”

Under the order, Trump will direct the Department of Homeland Security to move money around to start construction of the wall. Spicer said Wednesday the President would be working with Congress to determine additional funding for the wall. “At this point, his goal was to get the process started as quickly as possible using existing funds and resources that the department already has and then to move forward with Congress on an appropriations schedule,” Spicer said.

In an interview set to air on ABC News on Wednesday, President Trump insisted Mexico will pay for the border wall. The Mexican President has said the country will not pay for the wall, and government officials have indicated that the wall could push the country away from the negotiation table on trade. “We will be, in a form, reimbursed by Mexico,” Trump said, adding that construction would begin “in months.”

The President’s actions do not include an outright ban on Muslims entering the U.S., but he also ordered the State Department to “withhold visas” and use other tools to make sure foreign governments “accept and return criminals that came from their country,” according to Spicer. When asked about the so-called Muslim registry floated by Trump on the campaign trail, Spicer hinted there could be more action on “keeping America safe” down the line.

“I think the guiding principle for the President is keeping this country safe, and allowing people who are from a country that has a propensity to do us harm, to make sure that we take the necessary steps to ensure that the people who come to this country, especially where areas that have a predisposition, if you will, or a higher degree of concern, that we take the appropriate steps to make sure that they’re coming to this country for all the right reasons,” he said. 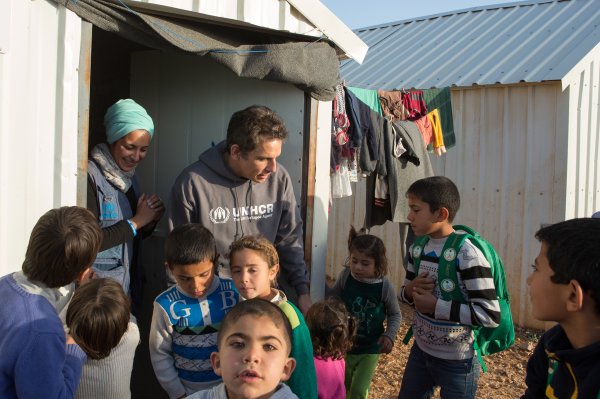 Nobody Wants to Be a Refugee
Next Up: Editor's Pick