Democrats Are Trying to Divide President Trump From Republicans in Congress

Defeated and in the minority, Democrats in Congress have few options to push their own agenda. But Senate minority leader Chuck Schumer has led a new effort in recent days to find areas where they agree with President Trump — and Republicans do not.

Democrats such as Senators Bernie Sanders, Tammy Baldwin and Sherrod Brown have put forward a series of proposals that could expose rifts between President Donald Trump and the GOP on building roads, buying American goods and labeling China a currency manipulator.

Last week, Brown introduced legislation that would require taxpayer dollars on government projects be spent on American-made goods. On Monday, Connecticut Senator Chris Murphy asked Trump to take similar executive actions. On Tuesday morning, Schumer went on the Senate floor to call for Trump to label China a currency manipulator, which Democrats, as well as some Republicans, see as an important first step to solving trade imbalances with China.

Later, a cadre of leading Democrats unveiled a plan for $1 trillion in infrastructure spending over 10 years, an idea Republicans have opposed but Trump has enthusiastically supported. And Baldwin asked Trump in an open letter to stick to his campaign message on trade agreements and buying American goods.

All those economic proposals are ones that many Democrats have long supported but which have divided Republicans. Without Trump’s support, the measures stand little chance of making headway in the Republican-controlled Congress, but for now, Democrats are relishing the confusion it could sow among the Republican conference.

“Trump said ‘Buy American, hire American,’ and he said ‘Let’s get rid of unfair trade deals,’” said Baldwin. “We have to hold him accountable. If that makes it uncomfortable for Paul Ryan and House Republicans,” she said, “that needs to be exposed too.”

For Republicans, the risk is in losing consensus in their caucus and ceding some control of the agenda to Schumer.

“Do they gain some political advantage if they can split us from the President? Obviously, yes,” said Republican Senator John McCain. “The Democrats are trying to find some traction which they have lost and obviously to call for, and the infrastructure bill is something very popular.”

On infrastructure in particular there are differences between Republicans and Trump, who throughout his campaign called for massive infrastructure spending. “We are going to fix our inner cities and rebuild our highways, bridges, tunnels, airports, schools, hospitals,” Trump pledged in his victory speech early in the morning of Nov. 9.

The new, $1 trillion Democratic plan includes $200 billion for a “vital infrastructure fund” and $210 billion to repair bridges and roads.

“I don’t think we ought to borrow almost a trillion dollars and plus up a bunch of federal accounts and incur additional debt and don’t build any projects to speak of,” said Senate majority leader Mitch McConnell on Tuesday. “I can tell you what I’m against is a replication of the Obama stimulus package in 2009.”

Rank-and-file Republicans are also skeptical of an infrastructure spending plan. Asked if he would support the Democratic plan, Senator Jim Inhofe of Oklahoma, a member of the Environment and Public Works Committee, sounded skeptical. “It depends on how they’re going to pay for it. You can’t do that unless you increase the debt, can you? So, no,” he said.

Democrats claim their plan could create 15 million jobs. “We have a President who called for a large, large infrastructure bill, and we’re challenging him to join us even if his Republican colleagues in the House and Senate aren’t for it,” said Schumer on Tuesday.

“We’ve wanted a strong infrastructure bill to rebuild America for several years,” said Michigan Senator Debbie Stabenow. “It has been Republicans in the House and Senate blocking that. We’re glad that President Trump understands this is a job creator.”

The infrastructure plan Trump proposed during the campaign would leverage $137 billion in tax credits to generate $1 trillion in private spending on infrastructure projects over 10 years; private investors would choose to spend on toll roads. But some criticized the plan, saying it would not generate the spending required to fix a wide range of projects.

On other measures like trade, Democrats see an opening to ally with Trump against traditional Republican orthodoxy. Trump vehemently opposed the North American Free Trade Agreement and the Trans-Pacific Partnership during his campaign, among other trade agreements that Republicans have historically supported.

“Now is the time to develop a new trade policy that helps working families, not just multinational corporations,” said Sanders after Trump signed an executive order on Monday officially withdrawing from the Trans-Pacific Partnership. “If President Trump is serious about a new policy to help American workers, then I would be delighted to work with him.”

Trump said in his Inauguration speech that he would “follow two simple rules: buy American and hire American.” After last year’s election, Republicans stripped a “Buy America” provision from a water resources infrastructure bill that would have required taxpayer-funded construction projects use American-made steel. Democrats protested the move, but Trump did not object.

Democrats now want to push Trump to commit to supporting Buy America laws. Brown, who represents Ohio, a manufacturing state where Trump won by 8 percentage points, asked the President in an open letter to commit to Buy America rules. “I strongly support your commitment to ‘Hire American, Buy American,'” he said in his letter.

Sanders has led Democrats in demanding that Trump hold to his commitment during the campaign not to cut Social Security and Medicare; Republicans have called for revisiting entitlement programs, and several of Trump’s Cabinet picks, including Representative Tom Price for Health and Human Services Secretary and Representative Mick Mulvaney as head of the Office of Management and Budget, have sought overhaul the programs in the past.

For Democrats, the agenda will depend in large part on what Trump is willing to support. Schumer has been lobbying the President on many of the issues in recent meetings. “He’s promised to label China a currency manipulator on his first day in office. We’re still waiting. Last night at the White House I mentioned this to the President. He didn’t say no,” said Schumer on Tuesday. “I’m not going to say what he said. He didn’t say no.” 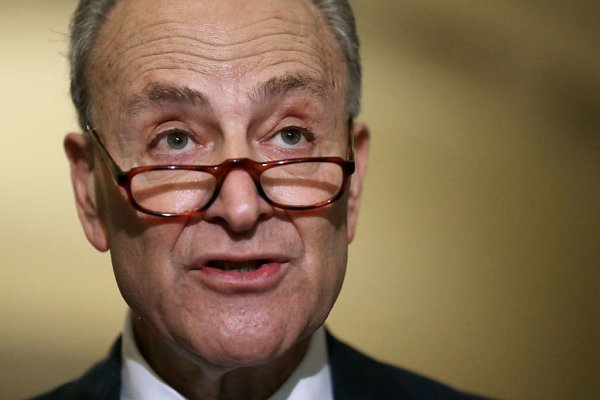 'We Are All Exceptional.' Read Chuck Schumer's Inauguration Day Remarks
Next Up: Editor's Pick