Casey Affleck Just Addressed #MeToo and the Harassment Allegations Against Him. Here's What to Know About the Controversy

Casey Affleck gave his first substantive interview about the sexual harassment allegations levied against him. Two women sued the actor for sexual harassment the set of the mockumentary I’m Still Here, which Affleck directed and produced. Affleck settled both lawsuits out of court, but the accusations resurfaced in the news during the lead-up to his 2017 Oscar win for Best Actor for Manchester By the Sea.

“It was an unprofessional environment and, you know, the buck had to stop with me being one of the producers and I have to accept responsibility for that and that was a mistake,” he told the Associated Press in an interview published Thursday. “I contributed to that unprofessional environment and I tolerated that kind of behavior from other people and I wish that I hadn’t. And I regret a lot of that. I really did not know what I was responsible for as the boss. I don’t even know if I thought of myself as the boss. But I behaved in a way and allowed others to behave in a way that was really unprofessional. And I’m sorry.”

Here is what you need to know about the controversy:

The allegations date from 2010.

In 2010, two women who had worked on Affleck’s experimental film I’m Still Here filed sexual harassment suits against him. One of the women claimed that Affleck crawled into bed with her without her consent while she was asleep. He allegedly pressured the other woman to stay in his hotel room and “violently grabbed [her] arm in an effort to intimidate her into staying” when she refused, according to the complaint.

The women claimed he verbally disparaged them and directed a subordinate to expose himself to one of them, among other types of misconduct. They also said that Affleck and the film’s star, Joaquin Phoenix, locked themselves in the women’s shared hotel room with two other women, allegedly to have sex with them. The full complaints are available here and here.

The claims were settled out of court.

Affleck was sued for $2 million by one woman and $2.25 million by the other. Both cases were settled out of court for an undisclosed amount in 2010.

At the time the suits were filed, Affleck denied the claims and threatened to countersue. Affleck’s lawyer initially told People: “The complaint will be vigorously defended and cross-claims will be filed.” They never did counter-sue and settled out of court.

When he was profiled by the New York Times in 2016, he responded to the allegations via email. “It was settled to the satisfaction of all. I was hurt and upset—I am sure all were—but I am over it,” he wrote. “It was an unfortunate situation—mostly for the innocent bystanders of the families of those involved.”

In a Variety cover story, Affleck said: “People say whatever they want. Sometimes it doesn’t matter how you respond… I guess people think if you’re well-known, it’s perfectly fine to say anything you want. I don’t know why that is. But it shouldn’t be because everybody has families and lives.”

Affleck seemed to address the controversy at the Golden Globes.

During his acceptance speech for the Best Actor Golden Globe, Affleck alluded to the “noise” that comes with fame, which some interpreted as a reference to the lawsuits and the press surrounding them.

“Despite how I might think I’m in charge at my house, it’s my kids who give me permission to do this because they have got the strength of character to keep at bay all the noise that sometimes surrounds people who live publicly,” he said. (A few outlets also noted that actress Brie Larson, who presented Affleck with his award at the Globes, did not hug him or shake his hand as is customary.)

Affleck’s critics faulted the Academy for recognizing him.

The conversation about Affleck’s behavior predated the Weinstein revelations in The New Yorkerand New York Times and the peak of the groundswell behind the #MeToo movement that would come months later and presaged what was to come.

At the time, Crazy Rich Asians star Constance Wu was one of the Academy’s most outspoken critics: She posted a series of strongly worded tweets shortly after the nominations. She has gone on to become one of the leaders in the Time’s Up movement.

Many critics argued that giving Affleck an Oscar would lead to the actor gaining more power, money and influence in Hollywood. Rewarding men who abused women, they said, perpetuates a cycle of sexism in the industry. Jade, for instance, argued it was hypocritical for the Academy to promote greater diversity (including gender diversity) and nominate Affleck.

Wu wrote, “He’s running for an award that honors a craft whose purpose is examining the dignity of the human experience & young women are deeply human” and then went on to suggest that the clout of the Affleck family has kept some silent in Hollywood. (Actor Matt Damon produced Manchester by the Sea.) She tweeted, “I’ve been counseled not to talk about this for career’s sake. F my career then, I’m a woman & human first. That’s what my craft is built on.”

Even before #MeToo, the case drew comparisons to other high-profile harassment and assault accusations.

The Academy has a long history with nominees who have been accused of misconduct. Roman Polanski fled the country after he was arrested for and pled guilty to the rape of a 13-year-old girl and has since won an Oscar. Woody Allen has been accused of sexually abusing his adopted daughter but has been honored by the Oscars.

Many argued that Affleck’s nomination was just the latest example of the Academy’s longstanding tradition of ignoring harassment allegations. This argument was bolstered by the surprise nomination of Mel Gibson that same year, who was caught on tape in a drunken anti-Semitic rant in 2006 and later pled no contest to misdemeanor battery in 2011 for hitting his ex-girlfriend repeatedly in the face.

Affleck did not present the Best Actress Oscar this year.

Traditionally, the winner in the past year’s Best Actor category presents the award for Best Actress, and vice versa. Affleck did not present the Oscar for Best Actress earlier this year. He told the Associated Press, “I think [stepping aside] was the right thing to do just given everything that was going on in our culture at the moment. And having two incredible women go present the best actress award felt like the right thing.”

Affleck now admits that the behavior on set was “unprofessional.”

“First of all, that I was ever involved in a conflict that resulted in a lawsuit is something that I really regret,” Affleck told the Associated Press. “I wish I had found a way to resolve things in a different way. I hate that. I had never had any complaints like that made about me before in my life and it was really embarrassing and I didn’t know how to handle it and I didn’t agree with everything, the way I was being described, and the things that were said about me, but I wanted to try to make it right, so we made it right in the way that was asked at the time. And we all agreed to just try to put it behind us and move on with our lives, which I think we deserve to do, and I want to respect them as they’ve respected me and my privacy. And that’s that.

“Over the past couple of years, I’ve been listening a lot to this conversation, this public conversation, and learned a lot. I kind of moved from a place of being defensive to one of a more mature point of view, trying to find my own culpability. And once I did that I discovered there was a lot to learn. I was a boss. I was one of the producers on the set. This movie was (shot in 2008, 2009) and I was one of the producers. And it was a crazy mockumentary, (a) very unconventional movie. The cast was the crew and the crew was kind of the cast and it was an unprofessional environment and, you know, the buck had to stop with me being one of the producers and I have to accept responsibility for that and that was a mistake. And I contributed to that unprofessional environment and I tolerated that kind of behavior from other people and I wish that I hadn’t. And I regret a lot of that. I really did not know what I was responsible for as the boss. I don’t even know if I thought of myself as the boss. But I behaved in a way and allowed others to behave in a way that was really unprofessional. And I’m sorry.”

Affleck also shared his larger thoughts on sexism in the industry.

“In this business women have been underrepresented and underpaid and objectified and diminished and humiliated and belittled in a bazillion ways and just generally had a mountain of grief thrown at them forever,” he told the Associated Press. “And no one was really making too much of a fuss about it, myself included, until a few women with the kind of courage and wisdom to stand up and say, ‘You know what? Enough is enough.’ Those are the people who are kind of leading this conversation and should be leading the conversation.

“And I know just enough to know that in general I need to keep my mouth shut and listen and try to figure out what’s going on and be a supporter and a follower in the little, teeny tiny ways that I can. And we do that at our production company and I try to do it at home, and if I’m ever called upon by anyone to help in any way and contribute, I’d be more than happy to.”

An update to this article included a headline that incorrectly stated the nature of the allegations against Casey Affleck. 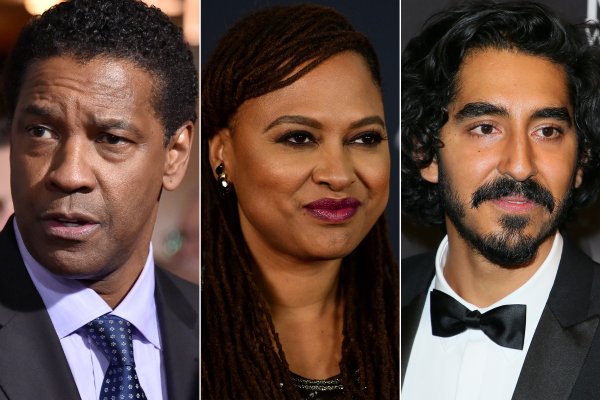 Diversity at the 2017 Oscars: These Are the Records That Were Just Broken
Next Up: Editor's Pick