Why Donald Trump Could — and Should — Return Americans to the Moon

Prime real estate: a shovel-ready site if ever there was one
NASA/Bill Ingalls;(NASA/Bill Ingalls)
Ideas
By Jeffrey Kluger
Jeffrey Kluger is Editor at Large for TIME magazine and the author of ten books, including Apollo 13, Apollo 8 and two novels for young adults. He has written more than 40 cover stories for TIME on topics ranging from space to human behavior to climate to medicine. Along with others at TIME, Kluger is an Emmy nominee for the web series A Year in Space.

Despite the “carnage” President Donald Trump described in his Jan. 20 inauguration speech, the fact is, former President Barack Obama left his successor a country in pretty solid shape. The stock market is at record highs, Americans without health insurance are at record lows and unemployment is just 4.7%. But if Obama did a lot of good things on Earth, his record in space was decidedly mixed. For the compulsively competitive Trump, that could provide a chance to score a big win, and to do it with a familiar old target: the moon. Here’s why.

When Obama entered office in 2009, NASA’s manned space program was in promising, if shaky, shape. The space shuttle was scheduled for mothballs in 2011, but that was alright since the Constellation program—which was designed to return astronauts to the moon and eventually take them to Mars—was moving along. Metal was already being cut on the Orion spacecraft (a 21st century Apollo) and the Ares V booster (a 21st century Saturn V).

But Constellation was underfunded and thus underperforming. Rather than just providing the program with the money it needed, Obama scrapped it and handed private industry the job of flying astronauts to the International Space Station.

Congress, however, was not pleased. Constellation was a jobs program as much as it was an exploration program, and Florida especially—that swingiest of swing states and home to Cape Canaveral—was counting on it. So Obama restarted work on the Orion spacecraft and the Ares V, though the rocket was given the anodyne name SLS, for Space Launch System. As for a destination, the moon was still a nonstarter and Mars was too big a leap for now. So instead, astronauts would be sent to explore an asteroid. Yes, most asteroids are even farther away than Mars, but no worries. NASA would simply find a small asteroid, send an unmanned spacecraft out to snare it, relocate it near the moon and then send crews to visit it. This — somehow — would help astronauts train for a Mars landing in the 2030s.

It was a harebrained plan that excited precisely no one and mystified precisely everyone and there was never much chance that even if Democrats had held the White House, the idea would survive the change of Administration. While the Trump team has not said as much, the smart betting is still that the asteroid mission is dead. Meantime, Orion and the SLS — which are still very much in development — are vehicles without an immediate or even near-term destination.

Enter — or reenter — the moon.

There are a number of reasons to point America back to the moon—many of them admittedly political. Not only would such a program pay public relations dividends for Trump, it could pay them relatively soon. When President Kennedy committed the U.S. to landing a man on the moon in his celebrated Rice University speech on Sept. 12, 1962, NASA had no real idea of how it would manage such a feat and it took them most of the sixties to figure it out. Now we know, and that skill set doesn’t go away.

It’s true enough that Trump has never evinced much interest in human space travel, and during the even campaign spoke of it dismissively, arguing that rebuilding American infrastructure comes first. But Trump has proven himself both protean and persuadable. Newt Gingrich, who did not find a spot in the Administration but is still said to have Trump’s ear, has long argued for a manned moon base. Trump likes to build stuff and there would be no bigger development project than extending his brand to the lunar surface.

More important are the scientific reasons to go. Spelunking on six small sites on the near side of the moon during the six Apollo landings hardly counts as an exhaustive exploration of so big a world. The Apollo crews got nowhere near the lunar poles — where water ice still lingers in craters — and never touched the far side, which would be the perfect spot to set up a small astronomical observatory, shielded from the radio noise streaming from Earth.

What’s more, while an asteroid would not have been a remotely suitable place to practice the skills that would be needed to settle Mars, the moon would serve nicely. As on Mars, its regolith — or soil — could, if properly modified, be used to grow crops in greenhouses. Ice could be harvested for drinking water or broken down into oxygen to be used in life support systems and hydrogen to be used as rocket fuel. The moon’s gravitational pull, just 17% of Earth’s, is less than half of Mars’s 39%, but it’s a better analogue than an asteroid’s mere ghost of gravity.

Best of all, the moon is only a three-day trip from Earth—a tiny fraction of the eight-month one-way journey to Mars. That means those greenhouses and water distilleries, not to mention crew quarters, could be flown there on the (relative) cheap and tested for reliability before being committed to a Mars mission.

Yes, a quick return to the moon would cost money, but NASA has long deserved to have its allowance increased. The space agency’s current annual budget is a little more than $18 billion, with less than half of that going to crewed space flight. That’s a historical pittance. NASA’s peak funding year was 1966, when its budget was $5.9 billion—or $43.7 billion in 2016 currency. That figure represented 4.41% of the federal budget. Today the figure is less than 0.5%.

Even the most aggressive moon push would not be likely to get American footprints in the lunar soil during Trump’s first — and, depending on the tumblers of history, perhaps only — term. Still, we credit President Kennedy with the Apollo triumph, even though it was Lyndon Johnson who pushed the program along after Kennedy’s death, and Richard Nixon who had the conn when Apollo 11 actually landed. Trump, similarly, could enjoy historical ownership of the second lunar push no matter how long his time in the Oval Office lasts.

And in case he needed one final incentive, consider that the only other country in the world that’s eyeballing the moon and has a chance to get there is Trump’s personal bête noire, China. Think Beijing’s boots in the South China Sea bug the new President? Imagine if the sea were the one called Tranquility. 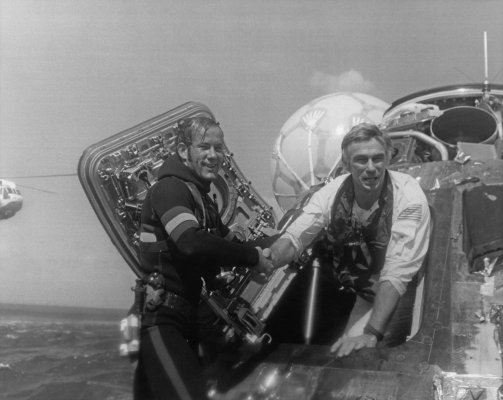 Eugene Cernan, the Last Man to Walk on the Moon, Dies
Next Up: Editor's Pick