Sean Spicer arrived at his first full press briefing as the Trump Administration’s top spokesman looking to defuse tensions still raw from his sharp-tongued rebuke of journalists over the weekend.

Spicer strode to the storied podium in the White House Briefing Room on Monday afternoon and began with a joke about his predecessor enjoying huge popularity among the press corps. “His title is secure,” Spicer said of Josh Earnest.

It was a signal that Spicer recognized the damage the Administration has fostered during the Trump team’s first days in office—and perhaps didn’t care. Trump on Saturday began a fight with reporters whom he said underestimated his crowd sizes, and Spicer called journalists to the White House for a six-minute statement echoing that. A day later, White House counselor Kellyanne Conway defended Spicer, saying he was putting forward “alternative facts.”

Taken together, it was an unusual—but not unsurprising—start to the President’s first term. Trump rode to power on an us-versus-them jet fuel that shows no signs of burning out now that the New York billionaire has arrived at his destination. If the first days of Donald Trump’s White House are any indication, the journalists tasked with chronicling perhaps the least orthodox President in the modern era are in for at least four years of mayhem. Facts are fungible, antagonism is the M.O., and almost anything can be branded “fake news.”

Spicer recognized he was in new territory but didn’t blink. From the podium, Spicer announced that the White House was now reserved four seats for journalists who could Skype into the briefings—an idea floated earlier this month by NBC’s Chuck Todd. But there were no details if any of the existing news organizations who have reserved seats in the Briefing Room might lose their real estate as a result.

And the first question of the briefing went to Daniel Halper of the New York Post, author of the unflattering Clinton, Inc.: The Audacious Rebuilding of a Political Machine. The second question went to Jennifer Wishon for CBN News, a Christian network, who asked about Trump’s executive order on abortion from earlier in the day. And the third went to Janet Rodriquez of Univision.

All were an affront to the vaunted First Row of the briefing room, made up of the five major broadcast networks and The Associated Press and Reuters.

None of this should have been surprising, given there were talks during Trump’s transition to power that the press might be entirely booted from their office space at the White House. While that didn’t come to pass, the press briefing was a sign that change has come. 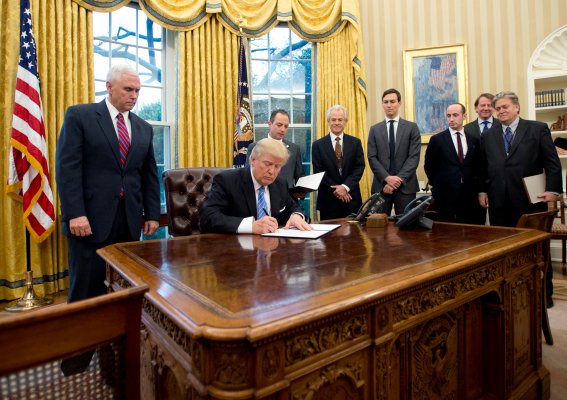