Britain’s Liberal Democrats are attempting to make a comeback on a wave of anti-Brexit sentiment.

The minority partner in the coalition U.K. Government in 2010-15, the center-left party was punished by its core voters in the 2015 election for propping up a right-wing administration led by the Conservative Party. Virtually wiped out, with just eight lawmakers returned to the House of Commons, the party has since undergone a resurgence under new leader Tim Farron after the country’s shock vote to leave the European Union in June.

Most impressively, the Lib Dems swept to victory at the Richmond Park by-election in south-west London last month, defeating popular incumbent Zac Goldsmith, partly due to a vocal anti-Brexit platform. With the Labour opposition struggling under hard-left leader Jeremy Corbyn, Farron has arguably emerged as the leading political voice for the 48.1% of the U.K. that wanted to stay in the E.U.

In this interview with TIME, Farron explains that the electorate respects his party’s “brave” stance on the E.U., why the U.K. will be outmuscled by President Donald Trump in any deal with the U.S., and how British lamb could suffer as a result of a post-Brexit trade agreement with New Zealand…

Prime Minister Theresa May outlined plans for a ‘hard Brexit’ last week, ending speculation that the U.K. could remain a member of the E.U.’s lucrative single market. What will this mean for the country when it leaves the E.U. in two years’ time?

But you don’t just want to be in the single market, you also want U.K. to remain a member of the E.U. Doesn’t that position ignore the referendum result?

If May thinks the 51.9% who voted to leave the European Union all meant that we wanted the hardest version of Leave, then that is a massive assumption, a dishonest assumption, and is a theft of democracy. The deal we get back [from the E.U.] will certainly not be something that was on the ballot paper last June. It will very likely be a deal that pretty much all the Remain voters and, let’s say, half the Leave voters will say that’s not what they voted for. If… three-quarters of them think they’re being betrayed, that’s a terrible way to end this. The only way to end this is to have a referendum on the terms of the deal with staying put as a default option, the second option on the ballot paper. Wanting to be in the E.U. will be in our manifesto whatever the state of play by the next general election.

But doesn’t Brexit give the U.K. new opportunities, particularly with the U.S. now that President Donald Trump has committed putting the country “at the front of the queue” for trade?

America is a very significant partner and important friend, and irrespective of what one thinks about Donald Trump, you don’t go walking off in a huff when you want to deal with people. You don’t react to the world as you’d like it to be, you react to the world as it is. I think the problem that we’ve got is that we are not equipped to do negotiations. We don’t have enough negotiators to do the negotiations with Europe, never mind starting on something else. The danger is that although we are a very capable, strong, independent country – and we will be whether we’re in or out of Europe – we are a lot smaller than the United States. Donald Trump is good at doing deals and he’s good at doing deals that are good for Donald Trump.

But it’s not just about deals with the U.S. The U.K. and New Zealand have lined up a post-Brexit free trade agreement. Isn’t that a sign the U.K. can be more successful outside the E.U. than within it?

I love New Zealand: it’s wonderful place with great people. But its population is 1% of the population of the E.U. and the notion that somehow that is an answer [to loss of single market membership] is nonsense. The doing of a deal seems to be enough to placate the very, very hardline Brexit people, irrespective of the fact that a deal in New Zealand probably screws British sheep farmers, for example.

The French ambassador has complained that her citizens are being abused in the U.K, even those who have lived and worked there for decades. Has Brexit legitimised the country’s worst tendencies?

The referendum has both revealed and created a level of unpleasantness – we saw not dissimilar signs of it in the U.S. election. Social media allows people to be as unpleasant as they’re capable of being without any filter. I don’t think the U.K.’s position is worse than anybody else’s. It’s a reflection of something that is a very unpleasant trait in the Western world and getting stroppy about it is not the answer, being morose about it is not the answer. Among the things that Trump and Brexit have in common are that neither of them were inevitable, and neither of them need to be the case forever.

How have the Lib Dems ended up leading the fight against Brexit?

The thing is you’ve got two groups of people in the Labour Party. You’ve got people who are of an ideological view, like Jeremy Corbyn, whose thoughts on the E.U. is that ‘it’s a capitalist club’… The other group probably do believe in the E.U., but they’re too chicken. At a time like this they’re more worried about protecting themselves, their careers. They’re just completely giving up and waving the white flag. The Liberal Democrats being the only [national] voice of opposition to hard Brexit are trying to give a voice to a Britain that is internationalist and outward looking. This is brave and it’s potentially taking the minority side. [But] there’s clarity in having a purpose, being seen as the plucky people saying what a lot of other people are thinking. 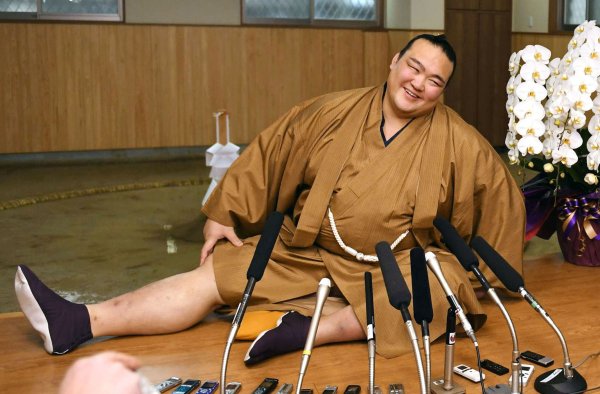 Japan Finally Has a Homegrown Sumo Champion
Next Up: Editor's Pick