This Is What the Women's March in Washington Was Really Like

It was unlike anything Gloria Steinem had ever seen before, and she’s seen a lot. The grandmother of modern feminism, who organized countless women’s rights demonstrations and attended civil rights marches in the ’60s and ’70s, said that the Women’s March on Washington the day after Trump’s inauguration was the largest and most energized activist turnout she’d ever seen.

“This is the other side of the downside,” Steinem said in her speech to the pink-hatted crowd Saturday. “This is an outpouring of energy and true democracy like I have never seen in my very long life.”

Nearly 500,000 people descended on Washington D.C. on day one of the Trump presidency, to register their opposition to the newly inaugurated president and defend women’s rights, racial justice and immigrants. Experts say the crowd was three times bigger than the Inauguration crowds the day before, and you didn’t need an arial photo to see the difference. On Inauguration morning, I was easily able to escape the crowds, walk the streets, and get a seat on the Metro for myself (and my purse). On the day of the March, I had to wait for four stuffed Metro trains to come and go before I could squeeze myself in among the protesters.

I talked to dozens of marchers of all ages throughout the cold and dreary day. I saw women holding homemade signs with slogans like “ImPEEch,” “Pussy Power” and “We are the Granddaughters of the Witches You Could Not Burn.” I saw women dressed as suffragists, a man with a sequined beard and an adorable little girl dressed as the Statue of Liberty. People chanted “No Hate, No Fear, Everyone is Welcome Here” and “Long Live Ruth,” referring to legendary Supreme Court Justice Ruth Bader Ginsburg. People held hands and made friends with strangers and shared water bottles and granola bars with kids who were getting grouchy in the cold.

Of the many things the protesters had in common, two things stood out: exuberance at finally being able to feel something about the outcome of this election besides depression and a resolve to keep fighting the Trump agenda long after the march ends. They planned to call their representatives, have tough conversations with conservatives and even run for office themselves.

Women marched alone, they marched with husbands or boyfriends, they marched with friends and sisters and nieces and daughters. The four Patel sisters live in different states and haven’t seen each other in three years — but they all gathered in Washington to march against Trump, with their daughters in tow. They even made pink satin capes decorated with the issues they care most about, like climate change, education and disability rights.

The Patel sisters’ parents came to America decades ago from Zimbabwe (they’re originally from India) in order to seek more equal opportunity for his four daughters. That’s why the siblings are so upset about the election’s outcome. “What my father grew up in, what he brought us here to escape, those values won,” says Mukti Patel. “We don’t want to protest, we want to stand up for what we believe in. We’re super-women.”

After the election, “I woke up for the first time in my 60 years ashamed to be an American,” said Katie Schwieder, an 8th grade teacher from Richmond, Virginia. She came to the march with her friend, Candy Mirabile, to turn that shame into action. “This is different from any other election where my candidate lost,” Mirabile says. ‘This is the kind of result that I take personally and I’m going to do something about it.”

The march was organized along the principle of intersectional feminism, the belief that feminism must address racial and economic inequality if it’s to count as feminism at all. The idea is to bring all progressives together under one big feminist umbrella, to fight for police reform, racial justice, immigrant rights and climate action at once.

“If we fall into the trap of separating ourselves by causes and labels then we will weaken our fight and we will lose,” said actress America Ferrera in her speech addressing the rally. “But if we commit to what aligns us, if we stand together, steadfast and determined, then we stand a chance at saving the soul of our country.” 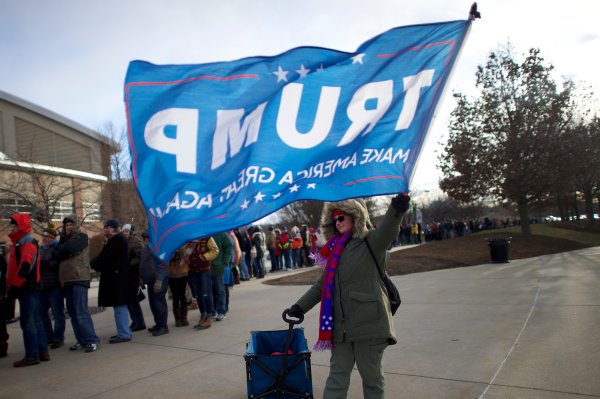