Marchers Say They're Going to Stay Active in Politics

Some will run for office. Some will register new voters. Some will badger their representatives. Some will speak up where they had previously been silent.

But almost every one of the dozens of demonstrators TIME interviewed at the Women’s March in Washington D.C. Saturday agreed on one thing: even if the Women’s March was their first action to resist Trump’s presidency, it would not be their last.

Millions of women gathered in the nation’s capital and in hundreds of cities around the world to march in opposition to what they see as the Trump Administration’s prejudiced views on women and minorities. The massive demonstration dwarfed the relatively light turnout for Trump’s own inauguration, which was smaller than both of Obama’s inaugurations, according to aerial photographs as well as subway rider totals collected by the D.C. transit system.

“Actions speak louder than words,” said Rochelle Grate, a 54-year old from Maryland who works in IT. “And when I got off the train, I was like, ‘Wow they mean business’”

Read More: How the Women’s March Has United Progressives

Protesters wore thousands of pink-knit caps, known as “pussy hats,” many of which were hand-crocheted by other demonstrators. They held signs with slogans like “We Shall Overcomb” (a reference to the President’s unusual hairstyle) and sang lyrics from the popular Broadway show Hamilton. Some wore Wonder Woman costumes and suffragette-style sashes, some held Lady Liberty-style torches. They passed around water bottles, complimented each others’ posters and shared granola bars with strangers’ grumpy kids.

And, newly energized by the wave of pink-hatted protesters who flooded Washington on the first day of Trump’s presidency, they all had plans for what they would do next.

For Gari Ann Dunn from Cincinnati, the election was a wake-up call. “I hate that it took something like this to get me activated,” she said. “I’m sure I’m not the only one thinking, ‘Hmm, maybe I could run for political office.’” She said she plans to look into local leadership positions when she gets home from the march.

Some are vowing to round up every vote they can for local elections in the next two years. Adrianne James, a 45-year old I.T. technician in D.C., said she’s newly energized to work within her community to make sure everyone is as civically engaged as they possibly can be. “We aren’t just going to tweet about it,” she said. “We need to vote, we need to get people to the polls, we need to get ready for 2018.”

One group of Maryland retirees vowed that they would make life miserable for their Congressman, Republican Rep. Andy Harris. “We’re gonna call him, protest his office,” said Francine DeSanctis, 70. “Grassroots, that’s a good thing.” Other groups like hers are sprouting up around the country to use Tea Party-style tactics to challenge Republican lawmakers on the state and local level. The Indivisible Guide, a practical manual for grassroots resistance compiled by former congressional staffers, has been downloaded more than 4 million times since the election.

Watch: Gloria Steinem and Harry Belafonte on the Future of Activism

But other demonstrators say the election is as much of a personal wake-up call as a political one. Even women who actively supported Hillary Clinton say they felt a sense of regret after the election, like they hadn’t done everything they could to sway friends and neighbors who voted for Trump.

Heather Wagner, a Texan Democrat, said she fears her silence in the face of Trump support may have contributed to the spread of ideas she thinks are poisonous. “I feel responsible for Trump’s election because I didn’t speak out,” she said. In particular, she’s thinking of one friend’s husband, a Trump supporter whose views she never challenged. “I’ve sat across the dinner table from him hundreds of times and watched him spew hate,” she said. “That ends here.”

“Every step I take is in honor of every time I should have spoken up,” she adds. “I didn’t know how much I needed to until now.”

White liberals in conservative states were particularly anxious to start having tough conversations they had previously avoided. For Betty Bryant, an 83-year old grandmother, the Women’s March on Washington is the first political demonstration she’s attended since she went to see Martin Luther King speak in Frankfort, Kentucky, in 1964. In the years since, she said, she’s often held her tongue when friends at her Kentucky church voice opposing views on issues she considers to be morally important. “I’ve just stayed quiet,” she said. “I’m not doing that anymore.”

And many of the protesters brought their children, some young enough to be breast-fed at the march, with the goal of instilling a sense of activism among the younger generation.

Diana Wild and her best friend Margo Kelly stood on the outskirts of the rally, teaching Margo’s 14-year old daughter Beatrice how to crochet pink “pussy hats.” Wild had already crocheted about six of them, and Beatrice’s first hat was almost halfway done. “It’s a matter of remaining plugged in and acting on that terror,” Kelly said. “Getting off the couch. If there’s any silver lining, it’s that this is a call to action.”

Beatrice is only in 9th grade, but she said already felt the stakes of this election. “It’s opened my eyes to the fact that we have to do something about it,” she said. Whatever she chooses for her career, she said, will be in direct opposition to everything Trump stands for. “Whatever I want to do, I don’t want it to be something that supports this kind of thinking.”

But even for the older generation, change has come. Once she decided to show up to the the march, Bryant got a surprising message from her son, the father of two daughters. “My son emailed me, ‘I’m proud of you,'” she said. “It’s the first time he’s ever said that to me.” 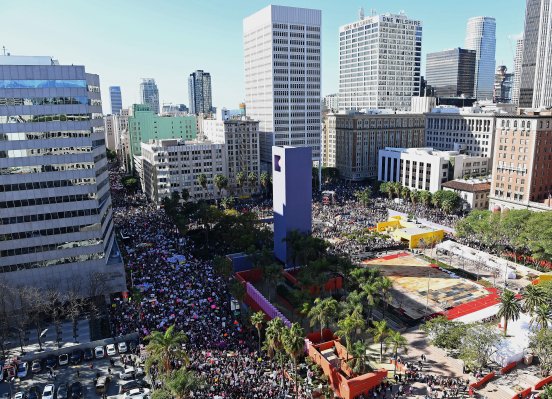 Hundreds of Thousands Flood the Streets to Protest During Los Angeles Women's March
Next Up: Editor's Pick