In one of the first official acts of the Trump administration, the Justice Department’s Office of Legal Counsel released an opinion supporting the new President‘s decision to hire his son-in-law, Jared Kushner, as a senior adviser.

The opinion, addressed to President Donald Trump and dated the day of his inauguration, says that the federal anti-nepotism statute, which explicitly covers the President of the United States, is superseded by a different statute providing for the President to appoint top aides “without regard to any other provision of law regulating the employment or compensation of persons in the Government service.”

The anti-nepotism statute seemingly prohibits government employees, including the President, from hiring close family members, including a son-in-law, in any agency in which the person exerts control or influence. It also prohibits anyone hired in contravention of the statute from being paid by the U.S. Treasury.

The memo, prepared by Deputy Assistant Attorney General Daniel L. Koffsky, a career Justice Department attorney, finds that the anti-nepotism statute is rendered moot for the President’s senior-most aides, because of the law granting presidents broad leeway in filling their White House teams.

During the transition, Trump aides and lawyers worked to find a legal loophole around the nepotism ruling in order to bring Kushner into the West Wing. Top Republicans, including chief of staff Reince Priebus, had developed a strong working relationship with Kushner, who holds the ear of President Trump, believing him to be a moderating force on the mercurial executive. Kushner was with Trump on Friday in the Oval Office as he carried out his first official acts in the White House.

A footnote in the memo suggests that the no-pay law may also be inapplicable in this case, but the White House has announced that Kushner will not accept a salary. 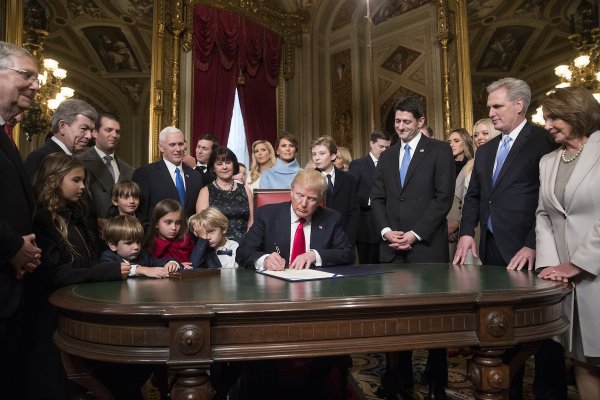