Donald Trump Signed Order to Prepare for Repeal of Obamacare

In his first official act in the White House, President Trump signed an executive order Friday directing executive agencies to begin preparing for the repeal of the Affordable Care Act, as his Administration ordered a freeze on all new government regulations.

Sitting behind the Resolute Desk in the Oval Office barely seven hours after his swearing-in, Trump signed an executive order to direct federal agencies to take steps to “to ease the burden of Obamacare,” Press Secretary Sean Spicer told reporters in the White House briefing room. Separately, Chief of Staff Reince Priebus distributed a memo throughout the federal government freezing the imposition of new regulations pending review by the new Administration.

Both actions begin the process of fulfilling key campaign promises of the new president to repeal and replace the Affordable Care Act and to roll back the Obama administration’s regulatory regime. Trump has promised to introduce a replacement to the healthcare bill after his nominee for Secretary of Heath and Human Services, Rep. Tom Price, is confirmed.

The new president also signed the commissions for his first two Cabinet Secretaries: Secretary of Defense Gen. James Mattis and Secretary of Homeland Security Gen. John Kelly, who were each confirmed by the Senate Friday afternoon.

Trump was still dressed in his suit and tie from the Inauguration, and hadn’t yet changed into a tuxedo for the evening’s Inaugural Balls. Asked about his day, Trump told reporters, “It was busy, but good. A beautiful day.”

Correction: An earlier version of the story said that a bust of Martin Luther King had been moved. It is still in the Oval Office. 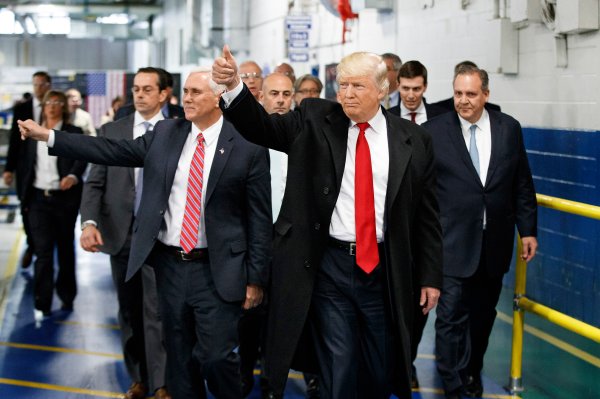 How Donald Trump Just Raised Many Mortgage Bills
Next Up: Editor's Pick