Day One In Donald Trump's America

Broadcast television news networks devoted a grand total of 36 minutes in all of 2016 to big, important issues that neither Donald Trump nor Hillary Clinton brought up in three nationally televised debates during the 2016 presidential debate.

These same broadcast news network executives and news anchors spent 90 minutes meeting privately with the president after the election, and then agreed not to talk about any of the issues that might — or might not — have been discussed in that meeting.

As a result, every, single one of us was left guessing about what might actually happen next.

Today, Day One, we should stop.

There is a public hospital in one of America’s biggest cities that is, right now, desperately trying to figure out how in the world it is going to provide health care services for tens of thousands of the poor who are about to lose their health care insurance when Congress and President Trump’s White House demolishes Obamacare without a replacement.

This same hospital is also preparing to handle half of the abortions in America should the day ever come to pass when a conservative Supreme Court justice tips the balance of power and Roe v. Wade is overturned or crippled enough so that half the states in the country deny abortion services to women seeking pregnancy counseling and services. Again, maybe this will come to pass, and maybe it won’t, but Planned Parenthood isn’t waiting.

Imams at mosques in every large city in America — the places and people the president demonized relentlessly during his campaign – are counseling tens of thousands of their constituents to be prepared for the possibility of a national registry that tracks them largely because of their religion. A Muslim registry may, or may not, come to pass. But these religious leaders aren’t waiting. They know the possibilities.

Because no one actually knows what the president may (or may not) do when it comes to the national Muslim registry he’s said he will pursue in some fashion, journalists have literally been forced to report on a photo that was inadvertently captured of the front page of a briefing book that the leading proponent of such a national registry brought to Trump Tower for his private meeting with the president on the subject.

Millions of children who live in America legally – but whose parents do not — go to school each day to learn about the history of the greatest democratic experiment in the history of the world and are now wondering in hundreds of thousands of Snapchats with their friends if their lives are about to be destroyed. They, and their friends, dissolve those worried chats as soon as they are sent, but they still can’t be quite sure who is tracking them, or their parents, and what the near future might truly hold.

Lower-level officials for dozens of big city mayors in America – the Democratic strongholds that Breitbart News first demonized and branded as “sanctuary cities” for useful propaganda purposes – are quietly preparing for the potential loss of federal funding should their bosses decide not to turn over millions of illegal immigrants to federal police officials.

We don’t know who will be rounded up and deported, or whether anyone will. But these city officials know their budgets are at risk because their communities, like the Catholic Church centuries ago, have been vilified as places that provide sanctuary to enemies of the state and criminals simply because they’ve pledged to honor due process and basic civil rights. The president has said he only wants to deport 3 million illegal immigrants who are criminals. But we are all guessing about what that word, “criminal,” means to him.

The president has said that he’ll issue dozens of executive orders today that are all designed to attack, undermine, roll back or eviscerate as many elements of outgoing President Barack Obama’s agenda as can be imagined. Presidential transition landing team officials have been funneling hundreds of potential candidates to Trump Tower. No one, including the leaders of many of the agency transition teams, knows which ones will be taken up and issued, but they are all hoping and planning that their cause is taken up and proclaimed.

The president — who has cavalierly dismissed the work of tens of thousands of scientists who have devoted their life’s work to the study of the biology, geologic, chemistry and atmospheric challenges to Earth’s ecosystem – could dismiss the Paris climate agreement with the stroke of a pen. We don’t know if he will abandon it, or if he won’t, but hundreds of civil society leaders who devoted years of their lives to bringing the historic agreement across the finish line are preparing to deal with the ramifications regardless.

States, cities and big businesses will take up the gauntlet and carry the United States’ commitment in Paris in 2015 forward if, or when, the national government abandons the playing field in an ultimately futile effort to protect and shelter energy industries born in the 19th century that are, even now, being replaced by 21st century energy technologies. They hope for the best, but they are also planning for a future where they are compelled to move forward without a meaningful partner in Washington.

All of us, Republicans and Democrats alike, hope for the best on Day One. We are an optimistic nation. But the truth is that we are all in the dark. 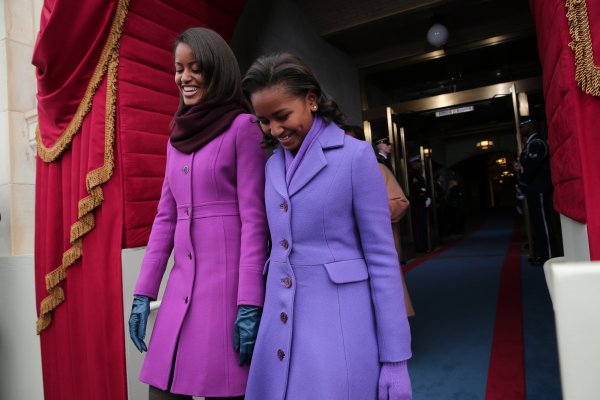 Growing Up Obama: Malia and Sasha Through the Years
Next Up: Editor's Pick