Donald Trump Used a Photo From Obama's Inauguration on Twitter

A view of the crowd at President Barack Obama's inauguration in Washington on Jan. 20, 2009.
Getty Images
By Olivier Laurent

As Donald Trump stood on the steps of the U.S. Capitol to recite the oath of office, the social media accounts for the President of the United States were automatically transferred from Barack Obama’s administration to Trump’s.

On Twitter, the @POTUS Twitter account shed Obama’s portrait and cover photograph replaced, just after 9 a.m., by Trump’s likeness and an image of a crowd of people waving American flags as they stood, in the freezing cold, in front of the Capitol.

One problem, though: That image was from Barack Obama’s 2009 inauguration, readily available on Getty Images for anyone to purchase including, it seems, Trump’s own communication team.

The photograph stayed up on Trump’s @POTUS account for several hours before being replaced first with an American flag and then with a low-resolution portrait of Trump looking out of a window. But it was too late, the Internet had noticed. 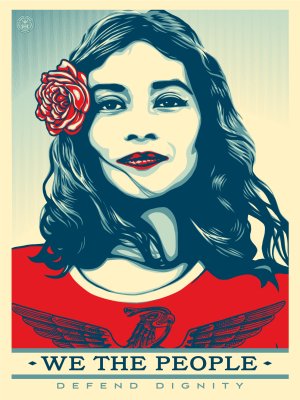 The Story Behind Shepard Fairey's Inauguration Protest Posters
Next Up: Editor's Pick