The Women's March Is Not Officially Honoring Hillary Clinton

Some women aren’t happy that the Women’s March on Washington omitted Hillary Clinton from its list of “revolutionary leaders who paved the way for us to march.”

When the Women’s March, which will take place on Saturday, released its official platform earlier this week, the group included a section dedicated to women who inspired organizers but didn’t mention Clinton’s name. The list included activists like Grace Lee Boggs, Gloria Steinem, Winona LaDuke, Malala Yousafzai and Edith Windsor. But Clinton, the first woman to be the a presidential nominee of a major political party, was missing. The omission is especially notable because the March borrows one of its slogans — “Women’s Rights are Human Rights and Human Rights are Women’s Rights” — from Clinton’s famous 1995 speech on women’s rights in Beijing. Clinton has given no indication that she plans to attend the event.

Sonya Clay, who lives in D.C. and supported Hillary Clinton in 2016 election, started a petition to get Clinton’s name added onto the list, which now has over 5,000 signatures. In addition to Clay’s petition, Wise Women for Hillary sent a letter to the March’s organizers asking that they change their mind. Others agreed, tweeting to March organizers under the hashtag #AddHerName. Some women now say they may stay home if Clinton’s name isn’t added.

Since Clay’s petition went live, the Las Vegas and Los Angeles contingents of the Women’s March tweeted that they would honor Clinton. The March also put out a statement on its official Facebook page, saying it was proud to include Clinton’s phrase words from her Beijing speech — but didn’t clarify whether it would add Clinton’s name to the honoree list.

“We have used this simple and powerful statement because it reflects the sentiment of women in our country and around the world. We hope, through this march, that we can bring diverse communities together for a collective vision of justice and equality for all people and a commitment to fight for that,” the statement read. “We march for each other.”

A spokesperson for the March did not respond to Motto’s inquiry about how the list was chosen and why the decision was made to leave Clinton off the list. But Linda Sarsour, the executive director of the Arab American Association of New York and one of the national co-chairs for the March, wrote a series of comments on a Facebook post about the decision. “No one is negating anyone,” Sarsour, who spoke at a Bernie Sanders rally in May 2016, wrote. “This is not about women being upset that Hillary didn’t win, it’s about a crazy man who is about to roll back all of our rights. Why let her be the story and erase millions of women who will be impacted. This is about optics.”

Sarsour also wrote: “Even for women who were die hard supporters they want to know when she’s gonna decide not to attend the inauguration of a man who disrespected her and millions of women across the country.” Sarsour did not immediately respond to a request for comment from Motto.

Clinton has a complicated feminist legacy. Many younger women and women of color opted to support Bernie Sanders over the former Secretary of State during the Democratic primary, arguing that Sanders was a better representative for the issues that were most important to them. Clinton, they felt, represented the establishment they were fighting to deconstruct.

But Clay said that the decision was particularly perplexing because the March was spurred by President Donald Trump’s victory over Clinton in an election punctuated with gender issues. “It seemed like a deliberate effort to distance themselves from her,” Clay said, adding that she can’t speak as to why March organizers didn’t include her. “She’s a historic figure, and she’s been a historic figure before she was Secretary of State. She’s someone who’s inspired people.”

The exclusion of Clinton isn’t the first disagreement about the direction of the protest. The March has seen divisions on issues of race, whether anti-abortion advocates should be able to attend and whether the March should advocate to protect the rights of sex workers.

For her part, Clay, who had registered to participate in the March, isn’t so sure whether she’ll attend. “I support it. It has value in helping shape the cultural and historic narrative, but the real work in advancing the center left’s vision for our country will require a different kind of work. It will require us to get voters out to the polls in 2017 and 2018, which will be Herculean feats,” she said. “The past two years were filled with protests. They were valuable, but didn’t translate into the kind of progress we all wanted to see.”

“We must have the right people to get things done, including working with others who don’t agree with us,” she added. “That’s what matters most to me and I’m conserving my mental and emotional energy for what I believe will be the most effective and impactful activities.” 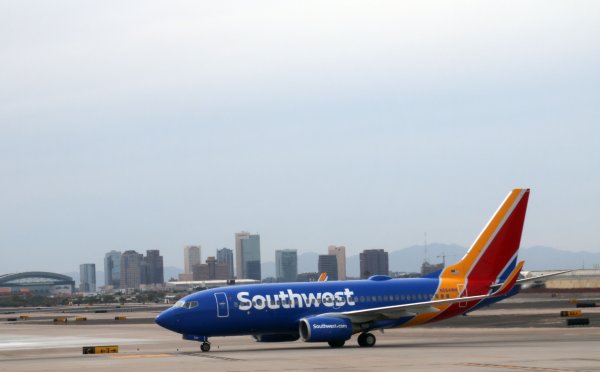 This Flight Turned Pink to Honor the Women's March on Washington
Next Up: Editor's Pick