On the morning of President Donald J. Trump’s inauguration, protesters across Washington positioned themselves at police barricades and checkpoints in an attempt to block people from gaining access to the inaugural festivities.

From 6th Street and Indiana Avenue N.W., near both the D.C. Superior Court and the Metropolitan Police Headquarters, to McPherson Square, just a stone’s throw from the White House, protesters formed walls, sang songs, chanted, and faced police with one very forceful message: as the presidency of Trump begins, so does the resistance to it. As of 1:30p.m. on Friday, D.C. police said they had made more than 90 arrests.

Sunsara Taylor of a self-described anti-fascism group led a chant of marchers in McPherson Square Park in Washington, the hub for many of the protest events.

“In the name of humanity, we refuse to accept a fascist America,” she said, leading the gathered crowd in chant before leading a march down K Street NW. “Protest is righteous, but more than that protest is needed,” Taylor told TIME, adding that she believes Trump is leading a “lynch mob form of rule.”

Before daylight broke, there was calm across D.C. Outside of the Metropolitan Police Headquarters, a small crowd of protesters holding painted signs that read “Black Lives Matter” had gathered. A woman on a megaphone declared they represented, “people that live here who are not going anywhere.”

Read More: See the Evolution of Protests in Washington

Just three blocks away on 6th Street, protesters with “Showing up for Racial Justice,” or SURJ, was attempting to block a gate. They sang the classic gospel song “This Little Light of Mine” as a man in the crowd attempted to drown out their voices with a “Trump!” chant. It didn’t work, but neither did their attempt to shut down the entrance, which was opened a couple minutes after TIME arrived.

Mikayla Lytton, 28, has lived in D.C. for five years. This morning, she joined SURJ activists, a mostly white group that says it aims to disrupt white nationalism from within white spaces. The group arrived at the 6th street checkpoint before sunlight and stood in line to try to block entry for those who filed in behind them. Lytton said she was driven to participate by Trump’s rhetoric which she said “has been characterized by what can only be described as white supremacy.”

“It’s racist, it’s xenophobic, it’s Islamophobic, it’s ableist, it’s misogynist. I could go on with so many -isms,” she said. “The folks who I showed up with brought love, brought hope, brought peace, and brought solidarity.”

At every turn in downtown Washington, those seeking to celebrate the inauguration of President Trump were met with those seeking to disrupt it, led by an alliance of organizations working together under the hashtag #DisruptJ20. They represent all sorts of communities: anti-capitalists, Dakota Access Pipeline protesters from Standing Rock, marijuana legalization advocates, LGBTQ activists and allies, racial justice warriors, animal rights groups and environmentalists.

On Thursday night, the rabble rousers had prepared for the day ahead by gathering at a church in upper northwest Washington. On the corner outside, a line of silent people stood holding candles as a part of a vigil for justice and peace that had been organized by a church leader further up the block. Cars honked as the passed by, eliciting whoops from the gatherers.

Inside the church the atmosphere was warm and anxious, but also easy for an outsider to feel like an “infiltrator,” which organizer Lilly Diagle made clear were not welcome to the folks sitting crosslegged on the floor awaiting guidelines for how to avoid arrest and where to meet for food.

Daigle, 28, told TIME that #Disruptj20 had been in the works since May, originally planned as a way for D.C. activists and organizers to educate groups from across the U.S. on the work activists do within the nation’s capital. But after Trump was elected, they decided to refocus the event into something more. The goal now, she said, was as their name suggested: to mess things up.

“To demonstrate that people are going to be resisting Trump’s hateful agenda from the minute he’s inaugurated,” she said.

Over Martin Luther King weekend, the organization hosted daily trainings in nonviolence and resistance, deescalation and legal rights that continued up until the event. Protest actions were interspersed throughout the week, too. On Wednesday, gatherers hosted a “queer dance party” on Vice President Mike Pence’s block in Chevy Chase. And Thursday night protestors were outside of the “Deploraball” hosted by white nationalists who refer to themselves as the “alt-right. But all of the subsequent actions were meant as a preview for the main event on Friday.

As the day went on, there were moments of both calm and chaos. The lightheartedness of the dance party carried over into a blockade on 13th Street NW where Sessi Blanchard and her friend traveled from Vassar College in New York to join a group of protesters holding rainbow flags and signs expressing their solidarity with the LGBTQ community.

“We’re out here to take up space and dance,” she said, before whispering “Trump is a fascist” to passersby.

Demonstrators elsewhere were met with pepper spray and force by police. The Associated Press reported windows at local restaurants had been smashed and videos posted on social media showed protesters running from police spraying canisters of gas near Washington’s Franklin Square.

As TIME approached a crowd at 10th and F Streets NW just after 8 a.m., pepper spray had just been used on the crowd after protesters and Trump supporters got into a shoving match. Demonstrators doused their eyes in water as others formed human chains near police barricades. A band came later, creating background music for protests chants including “the future is feminist” and “no justice, no peace.”

After 9 a.m., protestors from Standing Rock were being dragged away from the police barricades they had successfully blocked by groups of officers who had descended on the area. Members had come prepared for arrest, but mostly they wanted to bring attention to the Dakota Access Pipeline.

“We’re peaceful. We’re not here to cause and violence. We’re here to get the word out. This pipeline has not stopped and we’re not going anywhere,” said Fallon Horstmeyer of Topanga, Calif.

Sean Carney, originally from New Hampshire, traveled from the Standing Rock protests in North Dakota with 50 others who were among the demonstrators.

“We’re here to stand in solidarity with pretty much every single social justice movement from the past 50 years. They’re all here today,” Carney said. “What’s happening in that White House and in this city is scary.”

Pat Murdock of Chicago was near the Standing Rock protest attempting to gain access to the parade route, wearing a Trump hat and T-shirt.

“We believe in free speech, including speech we disagree with,” he said. “I wish they would just let us get through.”

As the President Trump, Vice President Pence, their families and lawmakers dined at the inaugural luncheon the streets of D.C. erupted. Clashes between demonstrators and police led to more pepper spray. Many dragged trash bins, newsstands, and mobile bus stop signs into the streets. While images of the 45th president waving to crowds aligning the parade route flashed across cable television screens, smoke filled the air along K Street NW where protesters had lit a limousine ablaze. But still, there was peaceful protest. Throughout the day demonstrators at McPherson Square sang songs, painted a mural, and hugged. 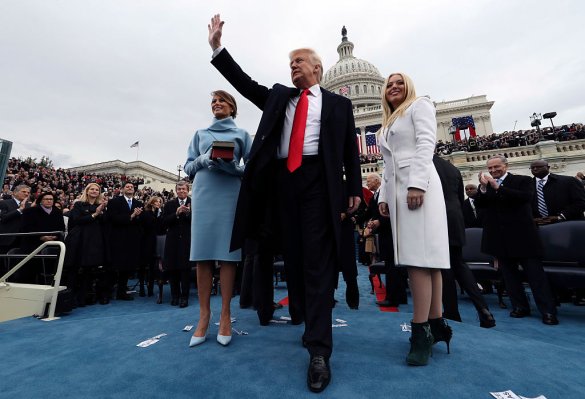 There’s Already a Campaign to Impeach President Donald Trump
Next Up: Editor's Pick