Theresa May Told Us What She Wants from Brexit. But What Is She Willing to Give?

Despite a politically charged delivery and carefully measured statesmanship to please the domestic audience, Theresa May failed to clarify how she wants to reach the 12 points of her Brexit plan during her long-awaited speech on Tuesday.

We heard how the U.K., under May’s leadership, intends to be a more global, fair and united Britain that will take back control of its borders and emerge a new outward-looking nation. But, although May’s speech may have soothed – at least for the moment – the fears of many Brits about their future, we are none the wiser about how the U.K. proposes to achieve this transition.

Indeed, rhetoric ruled the day with solutions nowhere in sight. The speech spoke to the attentive U.K. audience, but the constant repetition of cornerstone ideological principles had relatively little to offer to the audience patiently listening across the Channel.

First and foremost, the speech has made it exceedingly clear that migration from Europe will remain the key political card to play in Britain’s Brexit.

However, there is no way that the E.U. can compromise on the fundamental principles that govern it; you cannot have free trade in goods, services and capital without the interlinked free movement of persons. Once May decided not to explain these principles to the British electorate, we were set irreversibly on a collision course of hard Brexit.

Though May’s clear commitment to ensuring the rights of current E.U. citizens in the U.K. and current U.K. citizens in the E.U. is to be respected, it is regrettable that Britain, at this pivotal moment, hasn’t turned away from the narrative of E.U. workers as a dangerous force compromising the U.K. job market and social systems.

Time and time again, numbers have shown that E.U. migrants contribute more to Britain’s economy than they take out. Constant vilifying friends across the Channel is an odd footing for U.K.-E.U. relations going forward, especially as attacks on foreigners in the U.K. continue and ideas, such as forcing British companies to produce lists of non-British employees, continue to float around.

Nevertheless, the aim of the E.U. never was, is not and will not be to punish the U.K.. That is not a position to build a future relationship on. Therefore, I welcome May’s initiative to not move away from the historic ties that link the U.K. to the continent, but to continue our close co-operation in the areas of defense, security and the fight against terrorism.

In these areas, Britain and the E.U. will be able to make quick agreements. However, other areas will be much harder to get right, especially as the hard Brexit option suggests there is not much interest in compromises that would require May’s Conservative Party spending political capital on unpopular issues, including fulfilling the many commitments the U.K. entered into in the past.

Free trade does not happen by default; it is not the natural state that nations revert to. On the contrary, in order for free trade to flourish, nations must collaborate on ensuring compatibility between their national legal systems, melding their rules and regulations to bring down trade barriers.

This can often be overlooked, particularly in relation to the stance that “no deal is better than a bad deal”. Indeed, no one wants a bad deal but “no deal” is the worst deal for everybody. Moreover, we do not have much time. It is not realistic to negotiate Britain’s “divorce” from the E.U. and what the new arrangement will be at the same time. The faster we manage to conclude the first, the sooner we can start building the new relationship. But given the current rhetoric coming from London, I doubt we will manage to have both agreements within two years.

May’s speech has made the U.K.’s wishes clear. However, she has not explained how she plans to achieve them. We heard promises of a bold new future Britain, but we have not heard a single word on where the U.K.’s give for all the take is. Time is running out May should be clear on whether she wants to invest into being part of Europe or whether she really believes the U.K. can go it alone in splendid isolation from the Continent. 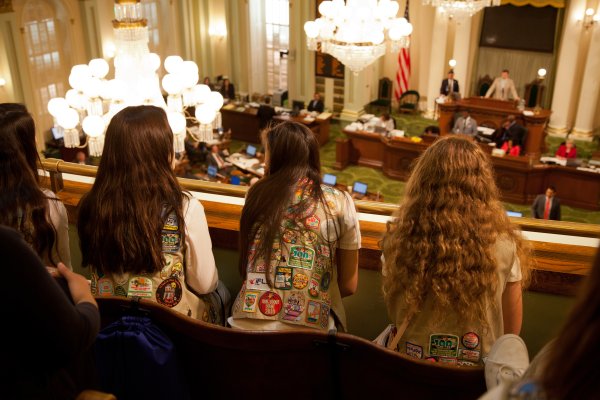 Girl Scouts CEO: Why Our Girls Are Marching In the Inaugural Parade
Next Up: Editor's Pick