Inside the Final Hours of the Obama White House

Only a skeleton staff remained at the White House on Jan. 19, 2017, creating an eerily quiet feeling in the normally bustling West Wing. Many desks and offices were already empty, having been vacated by staffers who have departed over the past few weeks. Those staffers still left were packing up their desks, handing in their phones and saying teary farewells to their colleagues.
Pablo Martinez Monsivais—AP
By Zeke J Miller

It started in waves, but to many inside the White House, it felt like a flood.

For weeks, inboxes have been inundated with goodbyes, thank yous, and new email addresses. Toasts were raised nightly at nearby watering holes, and teary sendoffs were made across the 18-acre complex.

The first aides to President Obama began departing shortly after the New Year, with steady numbers departing each day. As the hours waned on the Obama Administration, all but a few handfuls of aides left the White House for the last time Thursday, making space for their successors in the incoming Trump Administration.

On Thursday morning, White House Press Secretary Josh Earnest treated his remaining staff for breakfast in the White House Mess, where the staff printed out a commemorative menu thanking the outgoing Administration for their service. By the end of the day, Earnest was off the clock. A National Security Council spokesperson for the Obama Administration will stay on—just until Monday—to assist in the event of a major news event.

Incoming White House Press Secretary Sean Spicer announced that Trump would keep roughly 50 Obama aides on in critical roles in various executive agencies. Shortly after noon on Friday, more than 500 Trump staffers will deploy across Washington as part of “beachhead” teams to begin implementing Trump’s agenda. But only the most senior Trump aides will be able to access the White House, traveling to the complex on a bus shortly after the swearing-in. The rest will flow in in a steady stream on Saturday, Sunday and Monday.

On Thursday afternoon, the holdout Obama staffers were boxing their final mementos and steadily turning in their iPhones, computers, and access badges. At noon Friday, they will put years of sleepless nights, stress and time away from their families behind them. Some are planning moves, many to New York or California, or embarking on exotic vacations for the first time in years.

Along the wall near the stairway to the ground floor of the West Wing, which used to display a rotating selection of White House photographer Pete Souza’s shots, empty picture frames replaced the photos. Aides rushed to secure coveted “jumbo” pictures taken by the White House photographers for their personal collections. General Services Administration staff streamed through the West Wing to tidy up vacated workspaces, as archivists collected records to be filed with Obama’s forthcoming presidential library.

Armed with Sharpies, White House Chief of Staff Denis McDonough and Council of Economic Advisors Chair Jason Furman were just some of the senior staff that took friends and family members to the drained pool below the White House Press Room to sign the tile—a White House tradition.

Obama spent much of his final weeks doing his own goodbyes, standing for hundreds of “departure photos” with aides and their families, and thanking everyone from the Secret Service officers who’ve protected him to the crew of Air Force One.

On Thursday he placed his final call as president to a world leader, German Chancellor Angela Merkel, a testament to their cooperation over eight years on everything from Russia policy to the fight against ISIS. In an unusual move, First Lady Michelle Obama and Merkel’s husband, Professor Dr. Joachim Sauer, joined them on the call.

After dark on Thursday, as the smoke from the fireworks from President-elect Trump’s “Make America Great Again! Welcome Celebration” at the Lincoln Memorial wafted by, aides carrying boxes of personal belonging streamed out of the White House gates for the final time.

The White House would soon be home to a different President. 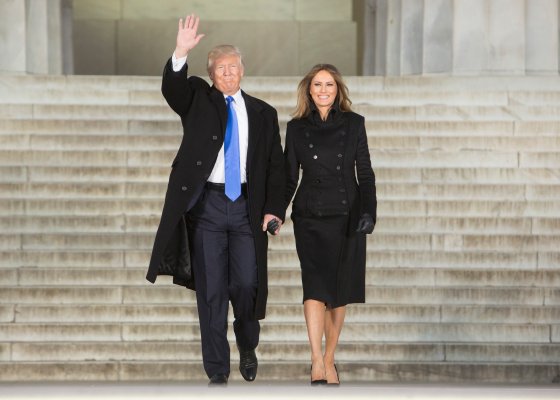 Evangelical Leaders Celebrated the Day Before Trump’s Inauguration
Next Up: Editor's Pick