Exactly 24 hours before Donald Trump takes the oath of office on Friday, dozens of conservative evangelical pastors led a prayer service—beneath a fresco of a black Jesus and black angels at Washington’s Greater New Hope Baptist Church—to celebrate his election.

The event was a who’s who of Trump’s evangelical supporters and advisors, including most members of Trump’s executive evangelical advisory board. More than three hundred guests, nearly all white, filled the pews, cheering and praying together for nearly two hours. A separate celebration of the group’s relationship with Israel followed, and two members of Israel’s parliament, the Knesset, joined, Sharren Haskel and Yehuda Glick. Sponsors included Tony Perkins’ Family Research Council and the Jefferson Gathering, a group that leads weekly prayer and church services inside the U.S. Capitol building.

So many evangelical leaders spoke it is difficult to list them all. Event organizer Jim Garlow, who leads Skyline Church in San Diego, told the group he hoped Trump’s win might usher in a new Jesus movement unseen since the 1970s. “If anyone would stand up and take credit for what happened, God would have reason to take them out—this was done by God,” he said, adding that evangelicals’ purpose was “to inaugurate Jesus as king.”

The event opened with prayers for the 45th president. Televangelist James Robison, who leads Life Outreach International, testified that he has never met a person “who is more attentive, who is more humble, who expresses greater meekness” than Trump—“I am praying that this man will understand what it is to be a father to a fatherless nation,” he said, to a standing ovation. James Dobson, founder of Focus on the Family, prayed for incoming Vice President Mike Pence. “We have been waiting for a moment like this throughout my professional life, and since Roe v. Wade we have lost nearly every battle that has occurred,” he said. “Yet here we are on the precipice of a different day, a new day.”

Ralph Reed, who leads the Faith and Freedom Coalition, prayed for the incoming Cabinet members of “the greatest nation that God has ever raised up in the history of the human race.” Based on the Senate confirmation hearings, he said, “The enemy is not thrilled,” referencing Satan, and he prayed that “the slings and arrows” coming their way “would be rendered impotent and bounce off their shield of faith.”

For many, it was a moment to celebrate that Trump has promised to defund Planned Parenthood and appoint Supreme Court nominees who oppose abortion. “We pray that these little unborn babies that have waited for so long, that you would give us a new commitment to them, and that we would be reminded that they are the least of your brothers and sisters,” U.S. Rep. Trent Franks of Arizona prayed, tearing up. Jentezen Franklin, pastor of Free Chapel in Georgia, said, “We pray the wrong people out and the right people in to the Supreme Court.” Catholic priest Frank Pavone, director of Priests for Life, got a standing ovation when he prayed, “We submit the Supreme Court of the United States to the Supreme Court of Jesus Christ.”

The group also prayed for the country’s relationship with China and Russia. Charles Huang, who wore a Jewish prayer shawl, prayed in Mandarin and in English. When he blew a shofar to pray for U.S. relations with China and Taiwan, many in the crowd leapt to its feet, cheering, some crying, in support. Joseph Bondarenko, a Ukranian preacher who served time in prison as a Soviet dissident, prayed in Russian, translated into English, for God “to transform the heart of President Putin and his administration” and to “restore the good relationship between our countries.”

Prayers often signaled evangelical distrust of the media. Lance Wallnau, a Dallas consultant who has prophesied about Trump, prayed that God would “anoint [Trump] to be a wrecking ball … let it wreck media strongholds, let it wreck academic strongholds, let it wreck whatever has been destroyed, the continuity of your purpose for America.” Fox News columnist Todd Starnes got big cheers when he prayed for “revival” in Americas newsrooms, and that reporters would “reject fake news and embrace the good news.” “Lord, we know it is going to be a miracle of biblical proportions, but we pray that you would do something with our media,” Starnes said. Duck Dynasty’s Willie Robertson, who endorsed Trump early, also prayed for athletes and entertainers. “For way too long, the evil one has had control of a lot our entertainment,” he said. “Help us change that, help us make better movies, better songs, write things about you.” His brother Alan Robertson added, “Make us great again in the name of Jesus.”

Garlow acknowledged to the evangelicals gathered that they were nearly all white, and introduced a time of prayer for racial healing. “It is going to need to be led by far more whites,” he said. “When blacks articulate the issue, they get written off many times as whiny, but they are announcing a deep pain and a wounding that is there, and we as whites must learn how to articulate the steps towards racial healing and racial unity.” Mark Burns, an African American televangelist and Trump supporter from South Carolina, prayed that God would bring the ark of the covenant back to Washington, D.C. Ronnie Floyd, past president of the Southern Baptist Convention, prayed, “May we speak unity and light into the urban areas of this nation, into the courts of this land.” 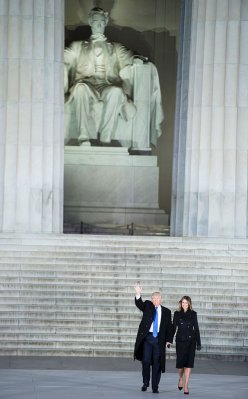 No, Donald Trump Isn’t the First President to Celebrate His Inauguration at the Lincoln Memorial
Next Up: Editor's Pick