Donald Trump Promises Change and Unity on Eve of Inauguration

President-elect Donald Trump pledged change, promised the country would unify and praised his presidential campaign as a “movement” Thursday on the eve of his official inauguration.

“So this journey began 18 months ago. I had something to do with it, but you had much more to do with it than I did,” Trump told a crowd gathered near the Lincoln Memorial. “I’m the messenger. I’m just the messenger . . . We all got tired of seeing what was happening, and we wanted change. But we wanted real change. And I look so forward to tomorrow. We’re going to see something that is going to be so amazing.”

A view of the setup at the "Voices of the People: Make America Great Again Welcome Concert" in front of the Lincoln Memorial on Jan. 19, 2017.
Peter van Agtmael—Magnum Photos for TIME

Trump reiterated his campaign mantra that he would “make America great again” after boasting about his unprecedented “movement” that led him to the Oval Office.

“It’s a movement like we’ve never seen anywhere in the world, they say. There’s never been a movement like this, and it’s something very, very special. And we’re going to unify our country.”

Trump is the first person to be elected president without having prior experience in public office.

“We are going to make America great again. And I’ll add, greater than ever before,” Trump said.

Trump will be sworn in as the 45th President of the U.S. on Friday. 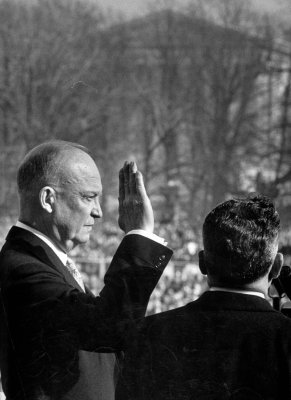 Do Business Leaders Make Good Presidents?
Next Up: Editor's Pick