It was a brief stop, but Donald Trump wouldn’t have missed it for the world. In late October, the Republican nominee traveled to Washington for a ceremonial ribbon cutting for his new Trump International Hotel at the Old Post Office on Pennsylvania Avenue near the White House. “Under budget and ahead of schedule. So important. We don’t hear those words too often in government, but you will,” Trump said. “Today is a metaphor for what we can accomplish for this country.” Reporters covering the event got the message: Trump was promising to bring his much vaunted—mostly by himself—private-sector experience to fixing the public sphere. Two weeks later, on the night of his victory over Hillary Clinton, the President-elect of the United States put the matter plainly. “I’ve spent my entire life and business looking at the untapped potential in projects and in people all over the world,” Trump said. “That is now what I want to do for our country.”

Which raises a fundamental question: How can the lessons of business—from real estate deal-making to large-scale corporate management—apply to the work of government? In an other-wise scattershot, heavily tweeted transition—the President-elect’s targets have ranged from Alec Baldwin to John Lewis, and from Arnold Schwarzenegger to the entire intelligence apparatus of the United States—Trump has been consistent about bringing a private-sector sensibility to Washington. His Cabinet is a basket of billionaire businesspeople (or near-billionaire businesspeople), among them Rex Tillerson at State, Steve Mnuchin at Treasury and Wilbur Ross at Commerce. We are about to live through a case study testing a perennial American proposition that all might be well if only the government could be run like a company.

The notion is hardly original to the new firm of Trump, Tillerson & Associates. In 2012 Mitt Romney quoted a small–business owner who’d proposed amending the Constitution to require Presidents to have spent “at least three years working in business” before they would be qualified to take office. (Irony alert: as Timothy Egan of the New York Times noted at the time, the GOP nominee mentioned the idea on the same day he had been in Las Vegas to attend a fund-raiser with … Donald Trump.) In the Reagan years, there were fantasies about running Chrysler’s Lee Iacocca or Peter Ueberroth, the 1984 Los Angeles Olympics impresario, for President. The consummate pre-Trump private-sector white knight, of course, was Ross Perot in 1992, who perfectly encapsulated the pro-business argument in the presidential debates with George H.W. Bush and Bill Clinton. Replying to his opponents’ observation that he lacked political experience, Perot said, “Well, they’ve got a point. I don’t have any experience in running up a $4 trillion debt. I don’t have any experience in gridlocked government where nobody takes responsibility for anything and everybody blames everybody else … But I do have a lot of experience in getting things done.”

Do business leaders make good Presidents? Given the most common paths to the White House, history offers us few examples. Trump, after all, is the only American in 228 years not to have served in the military or held political office before becoming President. Unless we count Washington, Jefferson, Madison and Jackson—slave-owning planters—as businessmen, our greatest Presidents have come from the bar (Jefferson, Lincoln, FDR), served as generals (Washington, Jackson, Eisenhower) or even failed in the private sector (Reagan went into politics after he lost his gig as a TV host and corporate spokesman for General Electric; Truman was a disastrous haberdasher in Kansas City, Mo.).

A list of the most significant U.S. Cabinet secretaries through history is CEO-free, from Alexander Hamilton to George Marshall to James A. Baker III to Robert Gates. Trump’s aware of the distinction between government and an ethos governed by the bottom line and brand management. “This was tough,” he said in his election night speech. “This political stuff is nasty and it’s tough.”

Business leaders often go to Washington thinking a focus on results will produce shareholder value for taxpayers. And just as often they leave disappointed or dissatisfied. The problem, of course, is that government is not a business. The public sphere is far less accountable to market measures than it is to the amorphous but real incentives and vicissitudes of politics. A corporation’s main goal is the maximization of profit. A government’s main goal, in the words of John Locke, is nothing less than “the good of mankind.”

That’s not to say, however, that experience running large, complicated companies—ExxonMobil, anyone?—isn’t valuable, even invaluable, preparation for the large, complicated departments of government. Dwight Eisenhower was the last President to display as overt a fondness for big businessmen as Trump. Ike liked corporate types so much that his first Cabinet, which took office in 1953, was referred to as “eight millionaires and a plumber.” (The “plumber” was Secretary of Labor Martin Durkin, a union leader.) In a recent essay, professor David Stebenne of the Ohio State University wrote that Eisenhower “felt government would be well served by successful men, who tend to be rich. If the leaders of successful businesses were excluded from consideration, [Eisenhower] wrote in his diary, the result would be an inability ‘to get anybody to take jobs in Washington except business failures, political hacks and New Deal lawyers.’”

A fair point, and Eisenhower’s wealthy appointees (John Foster Dulles at State, Charles Wilson at Defense, George Humphrey at Treasury) essentially performed well. Once dismissed as a lethargic Administration, Ike’s has come to be viewed as competent and effective. Still, they had their awkward moments. In a largely sympathetic portrait of the Eisenhower years in his narrative history The Glory and the Dream, William Manchester collected a few of the businessmen’s clunkier political mistakes. “I didn’t come down here to run a grocery store,” Wilson said when asked about high Pentagon appropriations. Humphrey played into the liberal caricature of unfeeling, unimaginative businessmen when he offered an opinion of Ernest Hemingway’s The Old Man and the Sea: “Why should anyone be interested in some old man who was a failure and never amounted to anything, anyway?” CEOs accustomed to speaking their minds usually learn that the political echo chamber is a different, often more brutal place than the narrower world of business.

A favorite President of Ronald Reagan’s, Calvin Coolidge, is perhaps best remembered for his remark that “the chief business of the American people is business,” which liberals have long scorned as presidential Babbittry while conservatives have celebrated Coolidge’s small-government common sense and fiscal discipline. In truth Coolidge was making a more complicated point, one that bears consideration in our own time. As historians like the late Robert Sobel have convincingly argued, in context Coolidge was suggesting that the press would do well to pay attention to commerce as well as politics, and his speech included this section: Americans, the President said, “make no concealment of the fact that we want wealth, but there are many other things we want much more. We want peace and honor, and that charity which is so strong an element of all civilization. The chief ideal of the American people is idealism. I cannot repeat too often that America is a nation of idealists. That is the only motive to which they ever give any strong and lasting reaction.” Our new President and his team could do worse than to read those words with care. 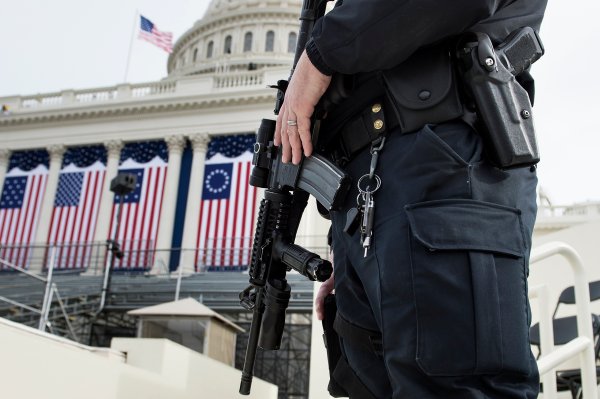 How Authorities Are Keeping Trump's Inauguration Safe
Next Up: Editor's Pick