Former U.S. President Jimmy Carter delivers a lecture on the eradication of the Guinea worm at the House of Lords on Feb. 3, 2016 in London.
Eddie Mullholland—WPA Pool/Getty Images
By Katie Reilly

Former President Jimmy Carter’s attendance at Donald Trump’s inauguration on Friday makes him the oldest former commander-in-chief to attend a presidential inauguration ceremony—a fact made more remarkable by his recovery from a cancer diagnosis less than two years ago.

Carter, now 92, announced in August 2015 that he had been diagnosed with cancer. He later said he thought he had just “a few weeks to live.” When he began treatment, the melanoma had spread to his liver and brain. But by that December, Carter announced he was “cancer-free.”

In a further sign of recovery, in March 2016, Carter said his doctors had told him he no longer needed cancer treatments—which had been a combination of radiation and the new immunotherapy drug pembrolizumab. Immunotherapy, an innovative new approach to treating cancer, uses the body’s immune system to fight the disease—sometimes by enhancing the immune system and sometimes by targeting specific cancer cells. When it works, it improves the body’s ability to fight cancer.

Research has show than pembrolizumab—also called Keytruda—can be an effective treatment for patients with late-stage melanoma, and it can be used before or after other types of therapy.

Carter, who is now in remission, was the first former president to RSVP for Trump’s inauguration, even though the outdoor winter ceremony has previously led some elderly former presidents to bow out of attending. Former President Gerald Ford was 91 when he missed George W. Bush’s second inauguration in 2005, citing health concerns.

Former President George H.W. Bush—who, at 92, is just a few months older than Carter—and his wife will not attend Trump’s inauguration due to Bush’s health. He was hospitalized this week and treated for respiratory problems related to pneumonia. “My doctor says if I sit outside in January, it will likely put me six feet under. Same for Barbara. So I guess we’re stuck in Texas,” Bush wrote in a letter to Trump, apologizing in advance for his absence. Bush also missed President Obama’s second inauguration, which took place soon after he was released from a lengthy hospital stay.

Carter has previously spoken about how cancer affected his family. His father died of pancreatic cancer at a young age, and many of his family members also died from the disease.

In the same interview, Carter attributed his long life to luck and a good health regimen. 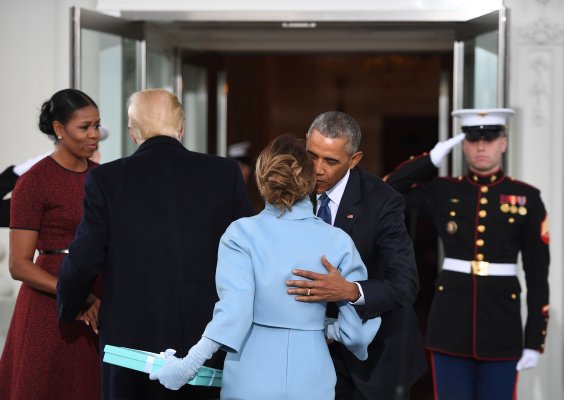 See Barack and Michelle Obama Greet Donald and Melania Trump at the White House
Next Up: Editor's Pick